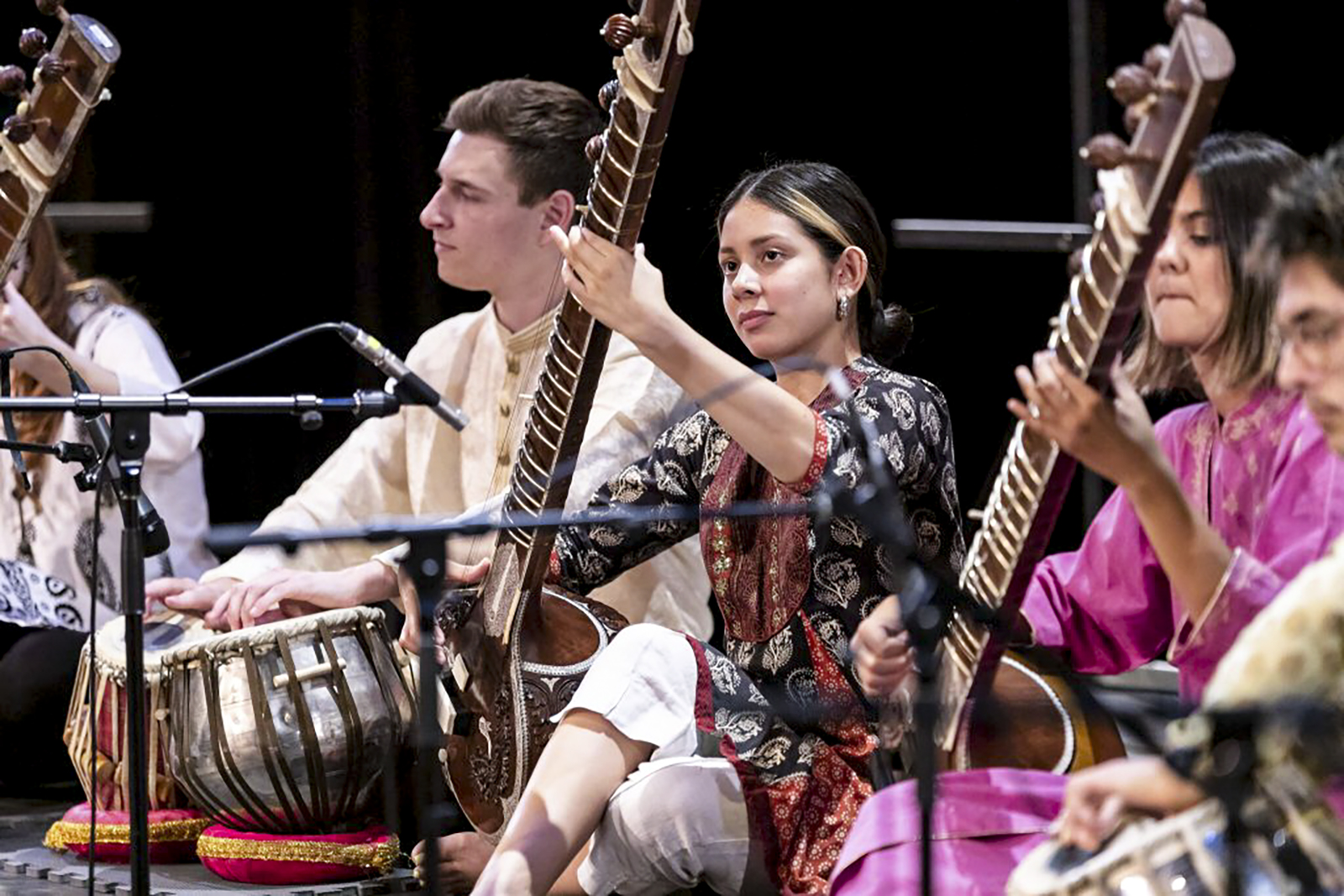 The Music of India Ensemble will perform as part of the Westwood Village Concert Series on Thursday. The performance will feature a sitar, which is typically used in Indian classical music. (Courtesy of Dan Neuman)

The sitar’s metal strings result in tough calluses but yield a delicate sound.

The instrument – reminiscent of its Western guitar counterpart – is a plucked instrument with strings and 20 frets, used typically in Indian classical music. Rahul Neuman, the sitar instructor and co-director of the Music of India Ensemble, said the large instrument is taught to students of all levels of expertise at UCLA’s Herb Alpert School of Music. In partnership with the Westwood Village Improvement Association, the ensemble will be performing Thursday for the Westwood Village Concert Series, which aims to promote cultural awareness of music from around the world through live performance.

“One of my goals is to give the students exposure to performing publicly,” Neuman said. “We perform, we practice, I teach them and they learn in a classroom setting, but there are limitations to how much you can learn. Those limitations are broadened when you get into public performance.”

The concert series was first a series of four performances throughout April 2018, but this year is being held throughout October. The Music of India Ensemble is the third group to play, said Kathleen Hood, events coordinator for the UCLA Department of Ethnomusicology.

For the performance, the instrumentation will be simple – four musicians will be playing the sitar with a drummer accompanying them on a North Indian drum called the tabla. They will be playing classical music specific to North India, in contrast to previous concerts in the series, which showcased Chinese and Mexican music, respectively.

“(The concert series) gives us exposure to the wider Westwood community who may not know about the existence of these music ensembles and the wonderful talents they bring,” Hood said.

For Thursday’s performance, the students will be performing a raga – a type of melodic framework in Indian classical music – titled “Shuddh Kalyan.” Though the raga in its full length usually takes anywhere from an hour to an hour and a half, the ensemble will be performing a shorter 40-minute version of the piece, adjusting to the time constraints of the venue, Neuman said.

The piece will begin with a slow introduction known as the alap. After the alap, the raga transitions into three compositions that are set to a rhythm cycle – called a tala – that is comprised of 16 beats. The compositions are lined in succession and become faster as the piece progresses, beginning with a slower pace and ending with the fastest. Neuman said ragas don’t typically have an overarching mood that can be simplified into happy or sad, but personally views the raga as having a joyful sound.

“In a raga, there’s not really a storyline,” Neuman said. “Ragas are difficult to describe because there’s no real counterpart in the West. They’re pieces of music that are meant to impart a particular mood, and it’s not one specific mood, but the mood of how the raga was structured.”

The ensemble’s music itself is not laid out on written sheet music, but rather is reliant on improvisation. The degree to which the music is improvised is primarily what sets apart North Indian classical music from South Indian, Neuman said. In class, the students learn the basic structures, the scales, the catchphrases and how to approach the music. After being provided the baseline, they learn to improvise around the basics in order to best capture the mood of the raga, said Isra Ameen, a fourth-year cognitive science student. Entering the class with only violin experience, Ameen said she had to quickly adapt to the strings of the sitar and playing it in a public setting.

“Public performance is an important way to learn Indian classical music,” Ameen said. “You have to learn to read the audience and react to them not only then and there right as you’re performing, but also afterwards, learning from that experience.”

For the students, the performance in Westwood is an opportunity to further develop their skills with the sitar and tabla. Ameen said though it is an unintuitive instrument, the improvisational aspect of performing with it provides a sense of satisfaction that few other instruments do. He said he hopes the Music of India Ensemble will continue to grow and attract potential sitar players.

“Most students who start have never touched the instrument or seen it,” Neuman said. “It’s really starting from scratch. It’s a demanding instrument in the way you have to sit and your feet fall asleep after a 30-minute practice session – but still the students excel.”