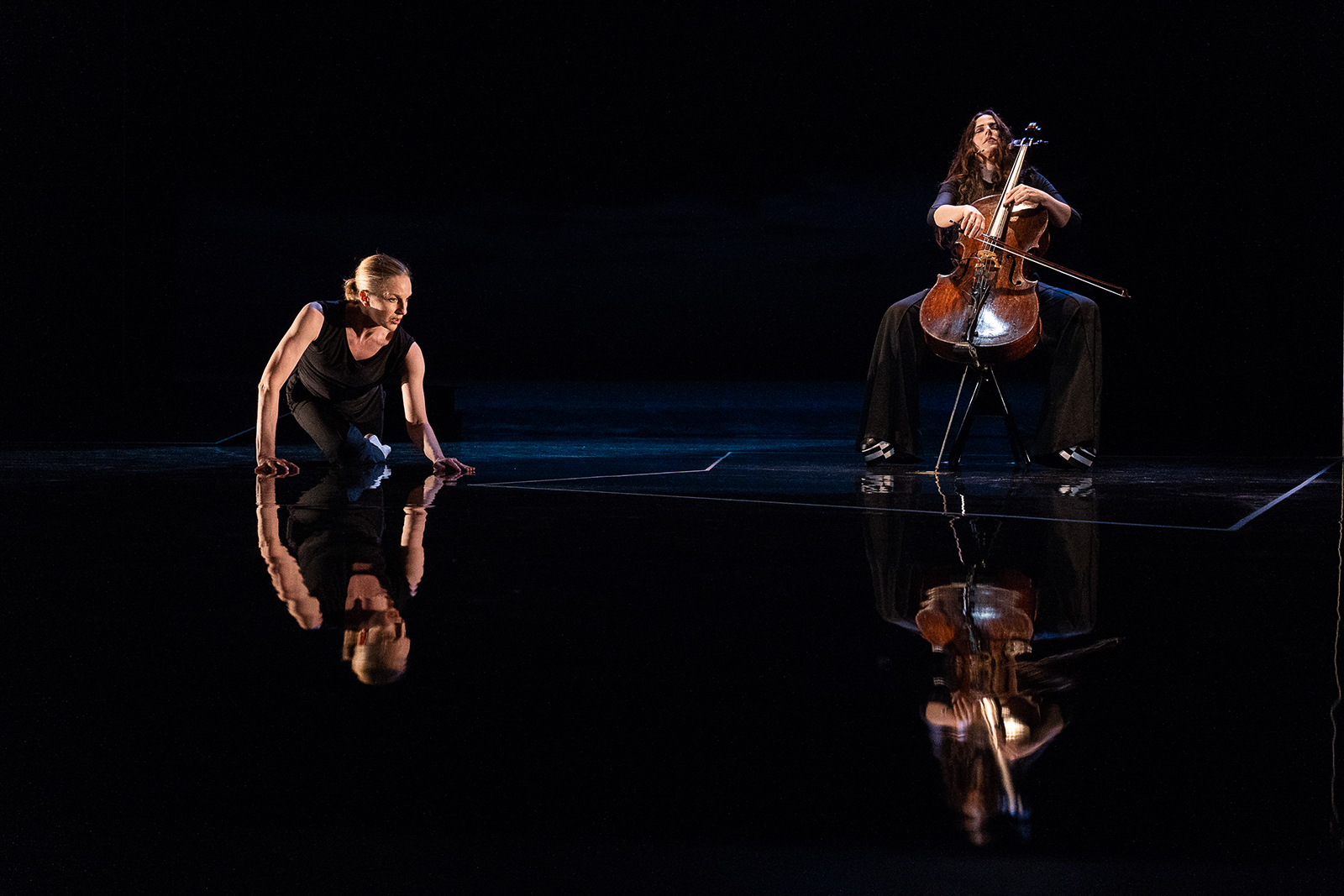 The Center for the Art of Performance at UCLA’s newest production, “THE DAY,” opens at Royce Hall on Friday and stars Maya Beiser on the cello and Wendy Whelan as the dancer. The music, composed by David Lang, was inspired by the aftermath of Sept. 11 and explores the journey of life and death. (Courtesy of Hayim Heron/Jacob’s Pillow)

A cellist and a dancer explore life and death on a reflective glass floor in “THE DAY.”

The show, which will run at Royce Hall on Friday and Saturday, presents concepts such as the collective memory and the meaning of life, said cellist Maya Beiser. The performance explores the connection between Beiser’s cello-playing and dancing done by Wendy Whelan through their interactions – or lack thereof, Beiser said. The performance consists of two songs – “the day” and “world to come” – which were written by composer David Lang specifically for Beiser. The integration of different elements – such as audio, video, live music and dance – create a dynamic, emotional piece, Beiser said. The latter piece was originally influenced by the disappearance of people after Sept. 11, 2001, Lang said.

“I didn’t want to write just a piece that made people think of (9/11),” Lang said. “But I was sort of curious where all those people went. They were there and then they died and were gone an instant later. … I was trying to … imagine their journey.”

Several years after the original creation of “world to come,” Beiser and Lang decided to collaborate on a prequel for the song, which led to the creation of “the day.” To make the piece feel universal, Lang said he crowdsourced phrases by auto-completing the phrase “I remember the day that” on his computer. After alphabetizing the 300 computer-generated sentences and removing offensive or product-related phrases, the results became a mixed catalog of memories from the public.

The research accompanies the live music and dancing through video and audio components, which create the abstract environment and deliver the monologue of “the day,” Beiser said. Audio also includes Beiser’s vocal recording and eight backup cello recordings played behind the live performance.

“Anybody who comes to experience (‘THE DAY’) would really bring their own notion into (the performance) and can infuse their life experiences,” Beiser said. “It’s really a multisensory piece. The video, the dance and the music performance: It all becomes one thing, one piece of art.”

While recording the two songs, Beiser said she felt the work needed another element to feel complete. She kept imagining a female dancer embodying the ideas behind the two songs, so she enlisted the help of choreographer Lucinda Childs and Whelan to bring her vision to life.

As the dance developed, scenic designer Sara Brown joined the project. She said her goal was to create a simple scenic design that highlighted the performers without adding too much visual noise. Some elements of the set include a ramp that leads to an elevated platform and strings that stretch vertically between the ground and the ceiling.

“The stage stays static (during each of the songs) but the relationship of the two performers changes,” Brown said. “Their relationship to the stage flips. … (Beiser) and (Whelan) essentially trade places and then they also have a color change.”

In addition to switching places with each other, Brown said the performers engage with on-stage materials, such as the strings and white fabric. Mirrored flooring and a large projection surface at the back of the stage reflect each of the performers, Brown said. The design elements become the environment through the mirrors and projections, Brown said, since the background images surround the performers rather than just being a simple backdrop.

On the reflective floor, two polygons outlined in thin white lines represent the footprints of the twin towers, Brown said. The structures are also symbolized by two folds of fabric that fall at the end of the group’s live performance of “world to come,” Beiser said. The images work together to further the themes about life and death that were originally inspired by 9/11, Beiser said.

“9/11 was such a monumental event that in some ways really everything that came after that was informed by that (event),” Beiser said. “This is not meant to be a memorial – the piece is informed by the idea of death, the idea of life and life after death.”

Lang said if he focuses on being honest about his thoughts and emotions through his music, then other people may feel something from it, too. The performance of “THE DAY” allows the audience to explore questions such as what people deem important in life, and infuses their own life experiences, Beiser said.

“It’s not about trying to invoke any particular emotion. Rather, it’s about making a piece that really gets you to experience something powerful,” Beiser said. “And I think whatever emotions people would experience is really very personal.”