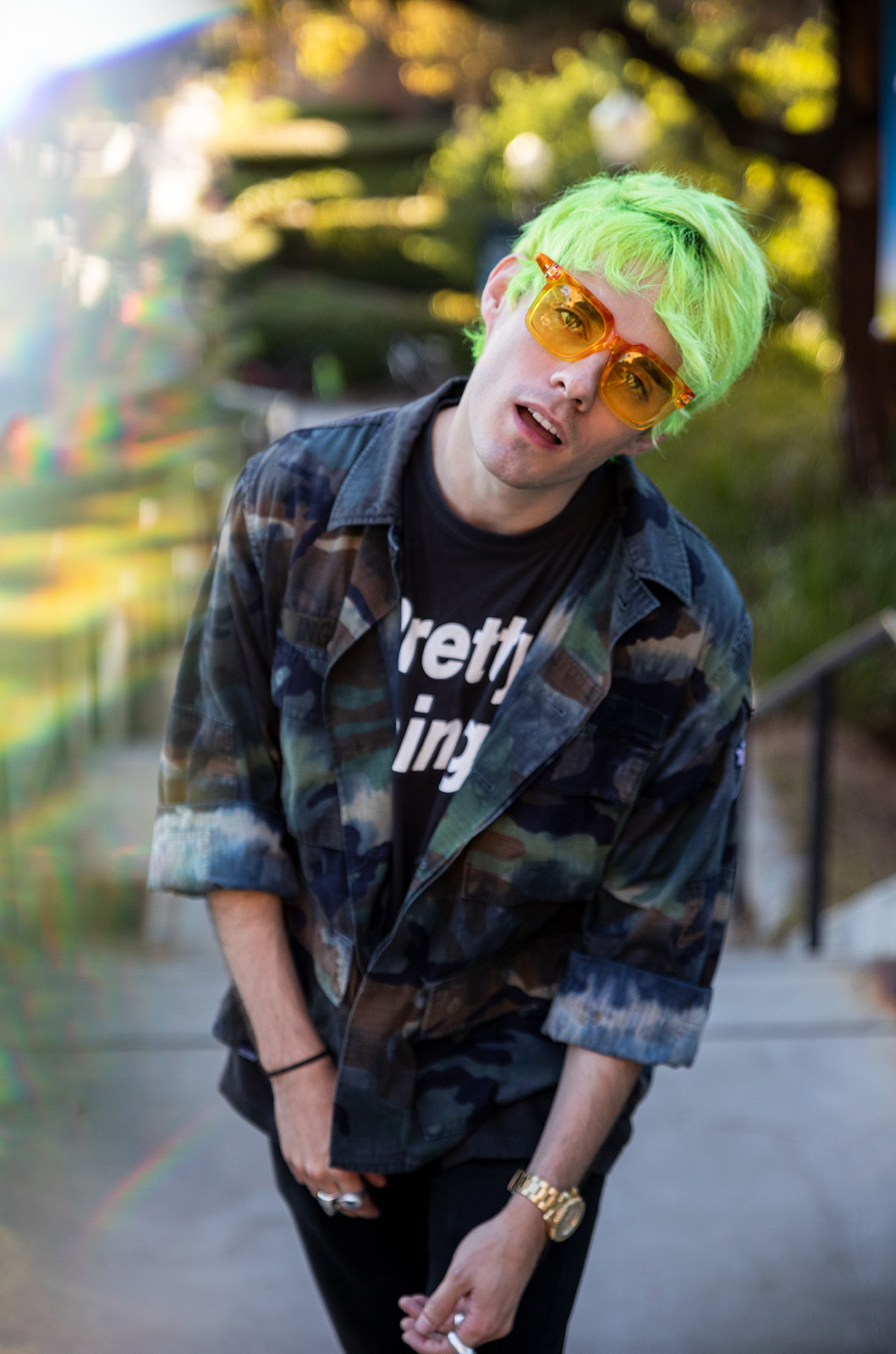 Awsten Knight, lead singer of Waterparks, said color and imagery is just as important as music when it comes to an album release. His synesthesia connects sounds and songs with colors, which helps him design each release, he said. (Ashley Kenney/Daily Bruin)

Waterparks is fading from deep purple to sour green with the release of “FANDOM.”

With a transition into a new album color scheme, “FANDOM,” which dropped Friday, explores everything from qualms with a past record label to the weight of having an intense online following. On the new record, lead singer Awsten Knight said he is more lyrically straightforward than he has been before. And with its headlining tour approaching in November, Waterparks is moving into uncharted musical and live performance territory, he said.

Between playing a clip of an unreleased song and discussing the advantages of synesthesia, Knight sat down with Daily Bruin’s Brooke Cuzick to share some inside details about the band’s colorful new record.

Daily Bruin: Leading up to “FANDOM,” you switched from your previous label, Equal Vision Records, to Hopeless Records. How was that transition?

Awsten Knight: We have radio for the first time and that’s crazy. The album is going to be in Target. … It feels like we actually have a push for the first time, instead of (“FANDOM”) just going out on streaming sites and everyone crossing their fingers.

DB: Are you being more lyrically open on “FANDOM?”

AK: I was really conscious of that this time. Last time it was still extremely honest; I’ve definitely never been disingenuous with lyrics, but there were definitely things that were written in a more metaphorical sense. This time, I was like, “I want to keep it very blunt because I don’t want anything to be misinterpreted.” When I was doing the lyrics on (the album “Entertainment”), it felt really good to do songs like “TANTRUM” where I was just saying what meant.

DB: What pushes you to break the genre mold of pop-punk style, since that scene can tend to get repetitive in sound?

AK: I just don’t see the point in doing what’s already been done. How are you going to beat old (blink-182)? How are you going to beat when The All-American Rejects were doing stuff, or Green Day? You’re not going to. You have to reinvent yourself, and in a lot of ways, I feel like pop-punk just doesn’t do that. So I just find the genre to be very limiting. And it’s fine if you like it; there’s nothing wrong with liking what you like, but it’s just not what I want to be a part of.

DB: What does the process of writing your music look like?

AK: Things usually start in Voice Memos on my phone. I’ve been doing it since like 2011, but I still have them all. My earliest one is from June 16, 2012. When I’m on a plane, I’ll go through and I’ll put present emojis next to them. I’ll listen to the ones with the presents next to them because I’ll forget them. … My notes are just solid lyrics. It’s kind of like putting the pieces together.

DB: Color and aesthetics have always played an important role in your music – how do you go about creating the look of each album?

AK: I think the visuals are just as important as the music. If you put out a cool album, but everything around is just dumpy and boring, then you’re missing that piece. … It’s not just an audible experience; it’s everything. I think one thing that helps is I’ve got this thing called synesthesia, where certain songs sound like certain colors. That helps with the lighting at the shows and putting together visuals for an album as well.

And with all the green and everything, I really wanted to build a world around this release. We’re about to film a video on Saturday for a song called “Easy to Hate” and I think the orange aspect of it is going to make more sense to people after this. I definitely made sure it was written into the “Watch What Happens Next” video, but it’ll be more understood in this one.

DB: You have a large online following on Twitter. Does your online presence play into themes that run through “FANDOM”?

AK: If I didn’t have the internet, it wouldn’t be called “FANDOM.” That was the one constant that made everything feel heavier or more difficult to deal with. … It’s a big focus on how (the fans) were throughout the process of these growing pains. Whether it was grieving relationships, or how friends or bands or other people start to treat you, or even just my own personal (stuff).

DB: You made your debut on SiriusXM Hits 1 with your single “Dream Boy.” Do you think you’ll start to consider potential for radio streaming when you write music?

AK: Like I said before, I love pop music. On the first EP, we had a version of “Fantastic.” It’s just straight up a pop version of it with no drums or anything, and (the album “Double Dare”) had “Take Her to the Moon.” “Dream Boy” is probably, if it’s not the poppiest song on (“FANDOM”), it’s No. 2. So I definitely wouldn’t let radio dictate that because radio doesn’t equal success. Plenty of people get pushed to radio and fall on their faces. You still have to be writing good songs; people still have to be able to connect with it. So I definitely wouldn’t do anything for the sake of radio. I just want to make cool, eclectic albums, and part of that just is pop.