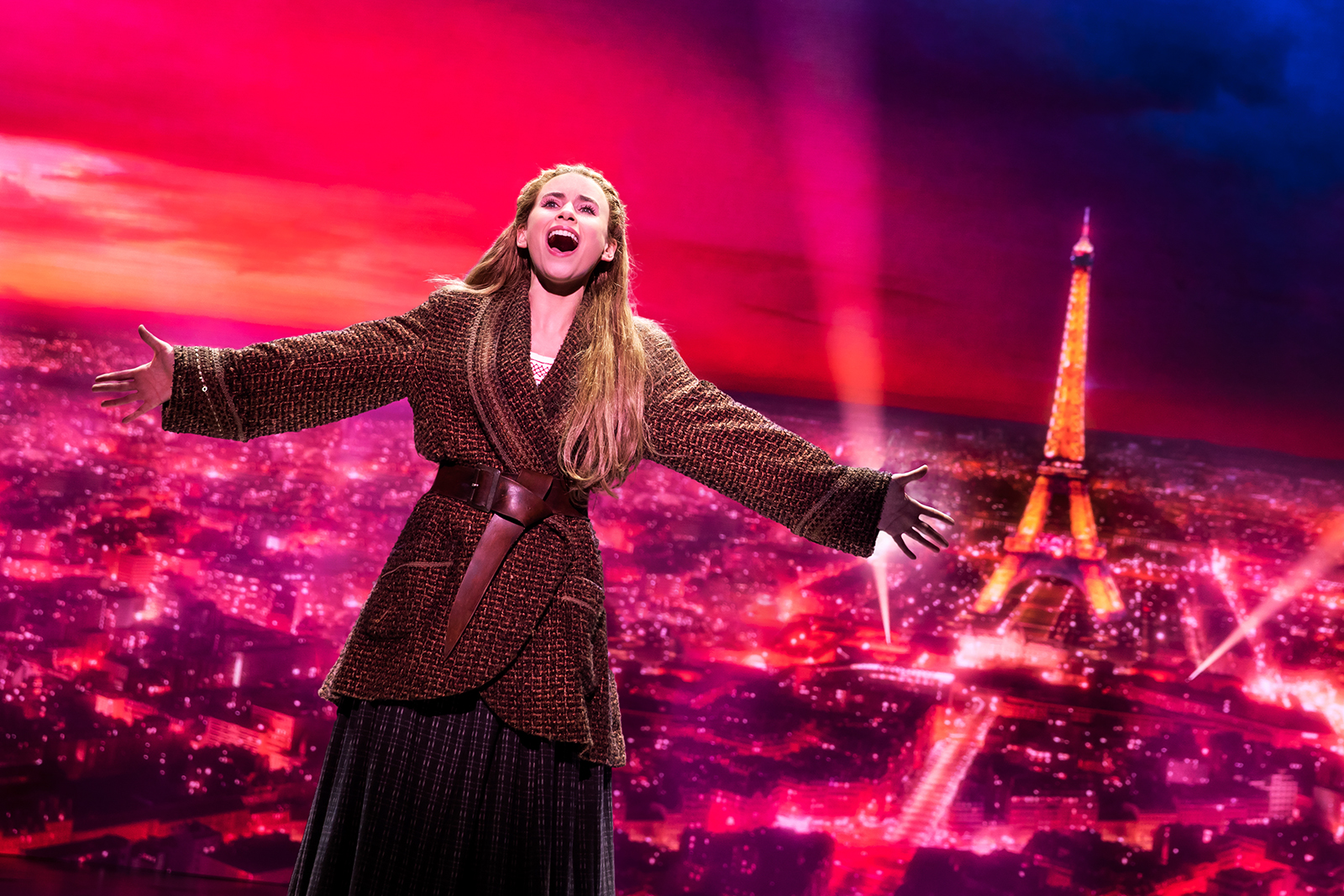 A dream of royalty and the warmth of family life takes a dark turn in “Anastasia.”

Following flashing red lights and revolutionary gunshots, audiences experience the shocking transition of 1917 St. Petersburg into 1927’s Leningrad. They are left shivering in the simulated Russian winter as digital snowflakes engulf the stage.

Running until Oct. 27 at the Hollywood Pantages Theatre, audiences manage to survive the emotional whiplash of “Anastasia” thanks to the performances of a vocally talented cast and impressive design. Guided by its eponymous main character, the musical tells the fictional story of the Anastasia Nikolaevna Romanov of Russia (Lila Coogan), the supposed only living child of the Czar following the 1917 Bolshevik Revolution.

After the brief scenes of upheaval at the show’s opening, viewers are brought into the story of Anya, an amnesiac street sweeper in Leningrad, and her companions, Dmitry (Jake Levy) and Vlad (Edward Staudenmayer). The three undertake a precarious journey to Paris to meet with the only living relative of the Czar – the Dowager Empress – and hope to present Anya as the missing princess of Russia. Little do they know, she very well might be.

Despite strong performances, “Anastasia” crumples under its own melodrama despite its intricate production. Its ambitious attempts to tackle motifs such as the perils of social revolution and the longing for a lost time or homeland leaves some characters largely unfulfilled. The blossoming relationship between Anya and Dmitry lacks a particular spark – an innovative set and historical costume design unfortunately cannot mask an underdeveloped romance.

Unlike the 1997 animated film which inspired the musical – and which truly embraced its own imagination – one wishes “Anastasia” would’ve committed to either tragedy or fantasy to make sense of Anya’s story. The film’s villain, the sorcerer Grigori Rasputin (voiced by Christopher Lloyd) with a talking bat for a sidekick, is swapped out in the musical for Gleb (Jason Michael Evans), a communist loyalist who befriends Anya. By trying to ground the narrative and humanize the villain, “Anastasia” also tries to delve into social commentary, though that commentary isn’t entirely clear.

Gleb is a reflection of Anya’s own enigma of an identity, as his commitment to the revolution challenges his fondness for her. While their search for identity in the new Russian society creates a nice parallel, the musical simply offers Gleb too little to do.

This is disappointing, as with more stage time or more interaction with Anya, the character could be one of the most menacing and intriguing villains yet. Instead, Gleb serves to represent the musical’s dark undertones, with Countess Lily (Tari Kelly) and Vlad serving as the equalizing comedic beats, dancing and gasping their way across the stage to the audience’s delight. Their tale of aged lovers from a Russia long-gone culminates in the exhilarating reunion song, “The Countess and the Con Man.” This sequence of levity by talented performers demonstrates the potential for whimsy “Anastasia” squanders.

As the performers endeavor to make sense of their individual characters, “Anastasia” thrives during ensemble songs such as “We’ll Go From There,” which overwhelms the audience with melancholy as the characters leave Russia for good. Scenes in Paris also pick up speed in the second act – lighthearted, 1920s jazz choreography in songs such as “Paris Holds the Key (To Your Heart)” evokes sentimental highs.

The production owes much of its magic to set design, which provides the foundation for Anya’s emotional and physical journey. Much of the musical’s charm grows from its ability to immerse the theater crown in an atmosphere of warm Paris sunlight or a freezing Russian winter.

A lifelike digital screen frames the stage and acts as a versatile background for the characters, glowing with Paris’ street lamps or orienting characters on maps of Europe. Digital pink flowers and an orange sunset help usher in a new era for Anya, as her and her friends leave Russia, getting closer to their destination. In addition to the screen, set pieces also allow the actors moments to fully live in their world. During the “Train Sequence” song, where the show’s trio evade capture and ponder their future, the performers move as acrobats on a simple, 360-degree revolving train car.

Going beyond the set pieces and design, it’s Anya’s tale that achieves the greatest depth in the musical. But even with a 2 1/2 hour time span, other important characters, such as the boyish conman Dmitry, suffer underwhelming arcs. It’s thanks to lilting solos like “Journey to the Past” and dramatic flashback sequences where Anya finds herself surrounded by the ghosts of the royal family, that her quest for memory transforms into the show’s most coherent narrative.

While Anya assumes her identity by the end of the musical, audiences may wish they knew her a just a little bit better.