Nakajima Natsu to teach Butoh, transformation of the body into a vessel for art 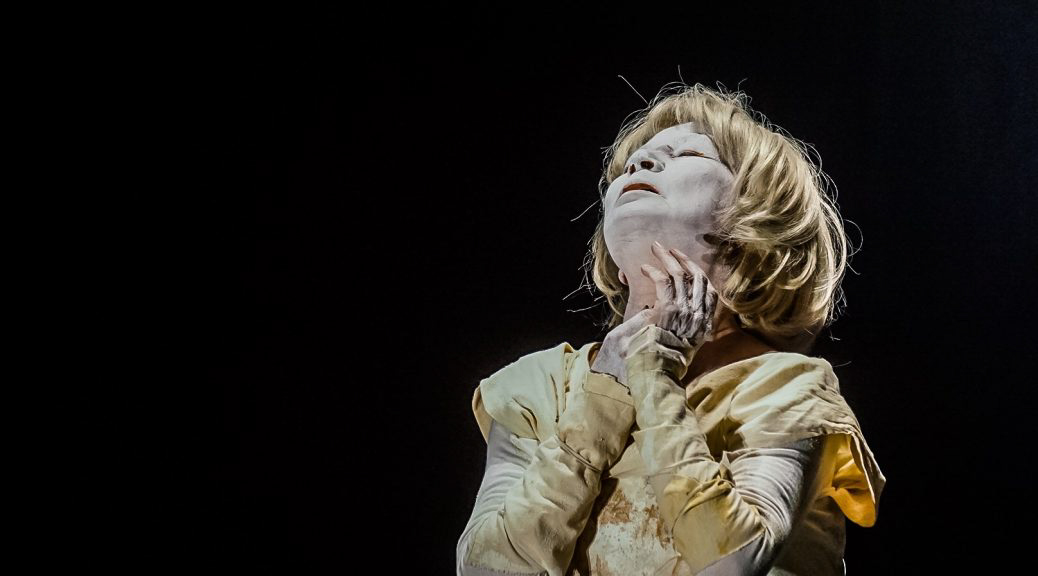 Butoh is a radical Japanese physical art form that will be taught at Kaufman Hall from Friday to Sunday. The performances can be elaborate performances with gold body paint but also more individualized with minimal costumery.(Courtesy of Nakajima Natsu)

A radical Japanese dance workshop is being led by a pioneer of the form this weekend.

Butoh, a physical art form that can incorporate myriad dance techniques, will be taught in a workshop at Kaufman Hall from Friday through Sunday. The class will be led by Nakajima Natsu, a practitioner of the art form since its inception. UCLA alumna and dance instructor Rosemary Candelario described Butoh as different from other dance styles as it doesn’t require the same physical dedication that other forms of dance demand.

“It doesn’t have a technique like in ballet where your leg needs to be at a certain place,” Candelario said. “The technique is much more internal and driven by imagery.”

Associate history professor William Marotti, who teaches modern Japanese history at UCLA, is one of the workshop organizers who helped bring Nakajima to campus. He said the two originators of Butoh, Hijikata Tatsumi and Ohno Kazuo, trained Nakajima herself in the burgeoning art form during its inception in the Japanese counterculture movement of the 1960s.

“(Nakajima) is the second generation of Butoh performers,” Marotti said. “She was one of the very first if not the first actual student.”

Marotti said Butoh emerged from the Japanese counterculture movement that resisted the uneven economic expansion the country was undergoing at the time. Artists of all kinds, particularly dancers, he said, were frustrated with more straightforward representational modes of dance, which they found to be inadequate and limiting.

The goal of the emerging Butoh style was to make one’s body appear as a puzzling object. To do so, performers would often wear costumes made to look like physical garbage representing the waste Japan’s economic success was generating, Marotti said. Whiteface and body paint is also common, he said, but the costumes would be pieced together from whatever material the dancers chose.

“There’s a kind of sense with all Butoh performance as a kind of going against the grain,” Marotti said. “It’s quite associated with criticality.”

For Candelario, Butoh has been a physically sustainable way to dance expressively as she gets older. After taking her first class in 2003, she said the experience was challenging yet intriguing both as a performer and an audience member. Candelario said forms of Butoh are dependent entirely on the dancer and not a universal aesthetic, such as the pointed toes and high-raised legs of ballet.

“It was a dance form that appreciated an aging body … bodies that didn’t have the kind of perfection that ballet demands,” Candelario said. “Its approach to movement is really driven by trying to embody an image.”

Candelario said Butoh isn’t easily classifiable in terms of style, as it exists on a variable spectrum. Performances can be highly choreographed group performances with gold body paint and spectacular, explosive movements, or smaller, subtler and highly individualized with minimal costumery, she said. Regardless of the size, she said Butoh is driven by dancers trying to embody an image and exemplify transformation.

In one example of a Butoh dance, Candelario said the dancer may evoke the image of an old woman with long hair, walking across the ocean floor, dragging sea urchins through her hair and emerging on the shore as a young woman rejuvenated. How the dancer physically inhabits that image is an artistic choice, Candelario said. Instead of performing a series of preestablished, stylized steps, adoption of an image and a movement toward transformation are the key components of the dance, she said.

“It’s a lot about transformation rather than … representation,” Candelario said. “Rather than (a dancer’s) leg being a certain height or doing a certain number of turns, the virtuosity of Butoh is the ability to transform.”

Yuki Hammel, a friend of Candelario’s who will be attending the workshops, said she’s taken Butoh lessons in Los Angeles for the past 18 years. Though she has experience dancing in styles like jazz and ballet, she said she prefers Butoh because she feels she can be more personally expressive. Hammel said she may bring her two young children with her to show them how the Butoh style of dance can allow adults to be just as expressive as children.

“I want them to see how silly grown-ups can be,” Hammel said. “We do all kinds of movements and they can learn from it and say, ‘Oh, we can be silly, we don’t need to be cool-looking all the time.'”

“I feel like (Butoh) is a dance that I could do for the rest of my life,” Candelario said.