Photographer captures scenes in India through a unique Jewish lens 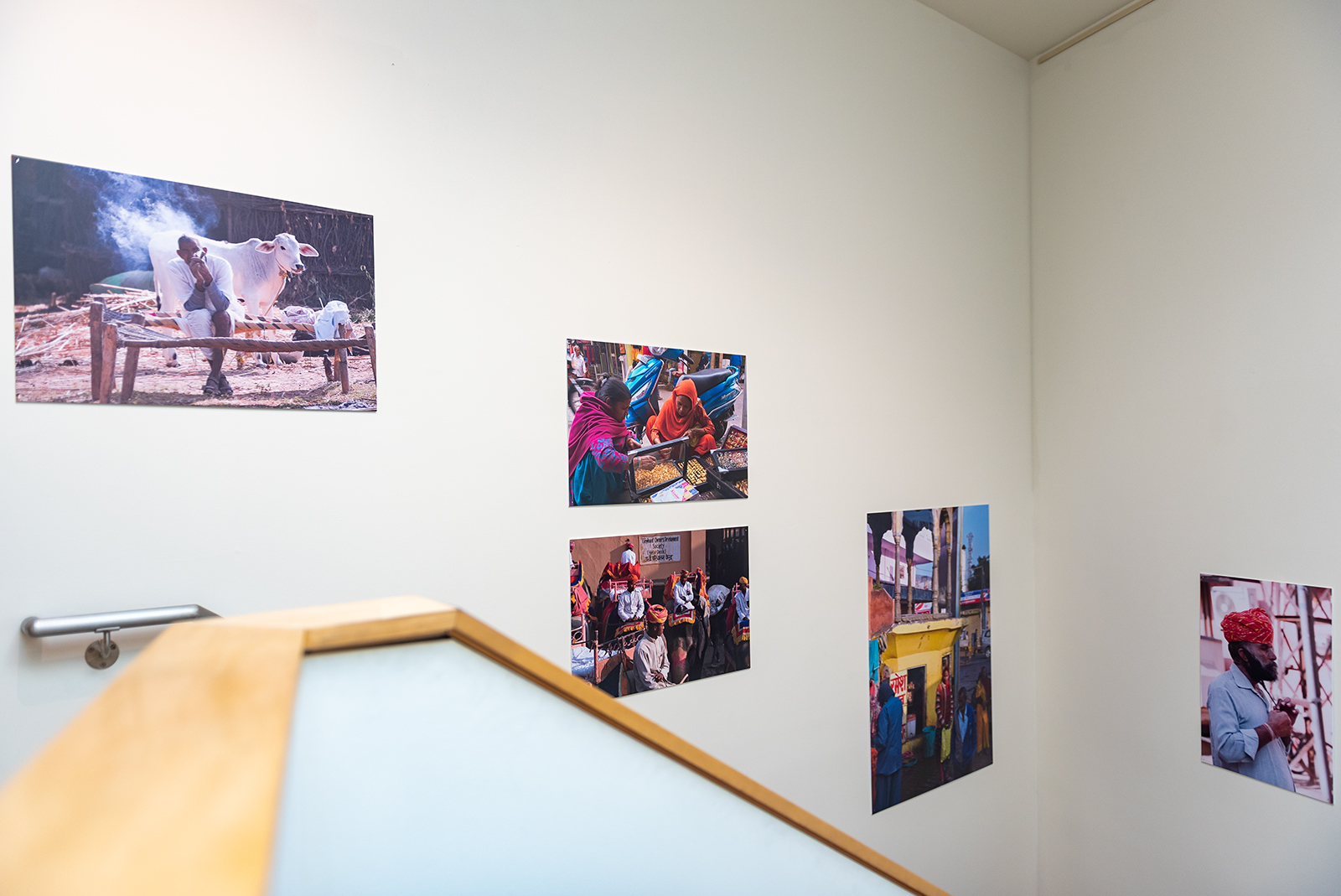 Mary Leipziger’s newest exhibit, “India through a Jewish Lens,” opened Thursday at Hillel at UCLA. It depicts Leipziger’s travels to India, including to Delhi, Mumbai and Jaipur.(Tanmay Shankar/Assistant Photo editor)

"India through a Jewish Lens"

Mary Leipziger photographed an old man sitting in front of a white cow, finding in it a sense of mysticism.

The man, donned all in white, sits on a roughly hewn wooden bench smoking a pipe in front of the cow – it is a simple moment of contemplating life, the photographer said.

Leipziger’s photograph, taken in the village of Katalpura in northern India, is featured in her exhibit, “India through a Jewish Lens,” which opened Thursday at Hillel at UCLA. Each picture in the exhibit depicts scenes from Leipziger’s travels to India, including cities such as Delhi, Mumbai and Jaipur.

Other photos show singular moments such as an ethereal night shot of bathers by the Ganges River or a holy man in striking orange with his hands clasped together. With her photography, Leipziger said she aims to provide a glimpse into what India looks like in its present state.

In her travels, Leipziger said she found an enclave of Jewish culture encapsulated in two primary Jewish organizations: Chabad and Jew Town. Chabad, an outreach Jewish organization that is orthodox in nature, is staffed by young Israelis who have a kosher kitchen they use to celebrate the holidays, she said. Jew Town, located in southern India, has a small population of 24 to 50 Jewish people, according to Leipziger.

When visiting Jew Town, scattered with antique shops, Leipziger said she encountered the town’s oldest inhabitant, 94-year-old Sara, whom she found reading a Hebrew prayer book daily. Leipziger said visiting Chabad and Jew Town allowed her to view her own Jewish culture with a more expansive lens, experiencing Jewish culture as it is practiced in India.

Rabbi Aaron Lerner, executive director of Hillel at UCLA, said the small enclave of Jewish population in India reflects the history of the people’s diaspora. Though Jewish people have lived in Israel at various points, many populations also exist in regions like North Africa, Europe, China and India, and Lerner said it is important to recognize that.

“I think it’s valuable for us to constantly remember that Jews come in all shapes and sizes and really from just about any culture and language in the world,” Lerner said.

The exhibit itself features a few of the photos Leipziger captured of India’s understated Jewish culture, said Perla Karney, artistic director of the Dortort Center for Creativity in the Arts at Hillel at UCLA. A biographical poster that will be featured next to the photography exhibit explains the details of the Chabad house Leipziger visited, further discussing the small size of India’s Jewish population, Karney said.

“These are informative photographs of the chaos as well as the beauty and spirituality of India,” Karney said. “I thought it’d be educational for our Jewish students to see India through a Jewish lens, though the photographs themselves don’t represent anything Jewish. It’s important that the photos are through the eyes of a Jewish photographer.”

While traveling to different cities, Leipziger said religion percolated through many of the sights she experienced in India and consequently seeped into her photographic depictions. Restaurants in Mumbai, flanked by narrow alleyways, would typically have small religious statues or prayer books next to them, she said. These religious motifs appear throughout her photography and reflect the sense of mysticism that she felt emanating from her photographic subjects, such as the man with the cow, she said.

“I feel that religion is born into their culture and is transmuted into the cities and landscape of the country,” Leipziger said.