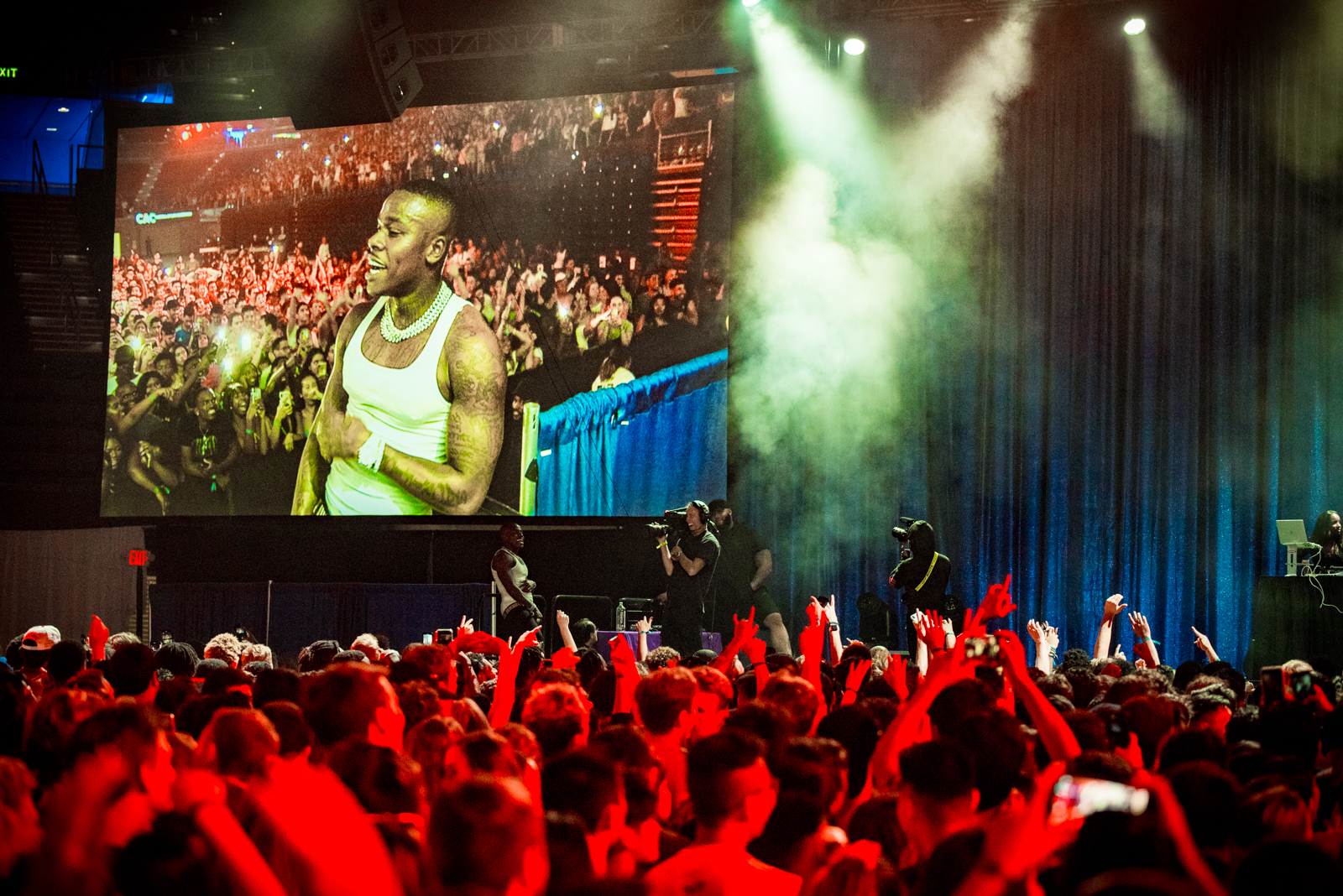 Singer-songwriter Masego brought jazz to a Bruin Bash performance that was anything but smooth.

The annual welcome-back concert was held in Pauley Pavilion on Monday, featuring openers CØLEMAN and Masego, followed by DaBaby as the opening act. While CØLEMAN’s remix of Panic! At The Disco’s “I Write Sins Not Tragedies” and the jazz-filled essence of Masego’s “Tadow” set the tone the first half of the night, they weren’t particularly able to elicit any strong reactions from the crowd.

From students pushing and shoving past each other to enter Pauley Pavilion, to most of the crowd sitting during the opening acts, Bruin Bash’s atmosphere was confusing and uncomfortable. As Masego took the stage, the majority of students were solely familiar with his most popular song “Tadow,” and they resorted to swaying through his other tracks like “Navajo,” which were dominated by his saxophone skills.

But it wasn’t Masego’s performance that stole the show, rather the events that followed. One attendee fell unconscious on the floor during the opener’s act, and another had to be escorted out of Pauley Pavilion for being too aggressive in the general admission floor section. However, first-year applied mathematics student Serena Lee said she felt the boisterous energy of Bruin Bash was a good way to set the tone for the upcoming quarter.

“Bruin Bash was a humbling yet necessary experience,” Lee said. “It’s less about the concert and more about the atmosphere of completely letting loose with your friends.”

But some students took things too far during what the Campus Events Commission deemed “baby’s first rave,” as the show was put on pause before DaBaby took the stage. Lights suddenly flared bright in Pauley Pavilion as members of CEC and the Cultural Affairs Commission made efforts to provide the crowd on the floor relief from students shoving their way to the front.

Eventually, the rumbling crowd took it too far, and a room of college students were taken back to middle school as they were told to “clap once if they could hear” the instructions they were being given. With much effort and time elapsed, the students begrudgingly backed up.

Responding to the follow-the-leader style of getting the crowd’s attention, some students in the back of the general admission section took a seat, waiting for the cramped front section to move back. Third-year sociology student Reyna Olivas said the concert was high energy prior to the interruption, and it was frustrating to see students ignoring simple instructions. Zoe Nelson, a first-year philosophy student, had similar feelings, as she felt the atmosphere of Bruin Bash had been definitively changed.

“I get the safety reasons, that makes sense,” Nelson said. “I get it, but it kinda killed the vibe.”

Nonetheless, the concert found its second wind with DaBaby’s appearance and resumed after the ten minute pause. Wearing a white tank, DaBaby was joined by two of CAC’s giant blow up babies, leaving him to call for a babysitter, which also happens to be the title of one of his top tracks. But before DaBaby began his set, he spoke directly to UCLA security who were trying to calm the crowd.

“We’re having a good time,” DaBaby said. “Leave us alone.”

As the the headlining set went on with countless mosh pits, the volume continued to reach roaring heights as DaBaby opened with “Suge,” jokingly labeling it as “the world’s No. 1 song.” From the floor to the nosebleeds, the audience became an ocean of jumping bodies and ignited with the light from student cell phones at DaBaby’s request. Many students hit the “woah” – the dance move famously associated with “Suge” – as DaBaby belted out the song’s lyrics.

Despite its hiccups, second-year bioengineering student Andrew Sonico Eugenio said Bruin Bash was a positive experience, as it brimmed with dancing and cheering students. While he acknowledged that the high profile artist often made the crowd unruly, he said the chaotic and dangerous energy stemmed from the satisfying set list.

“DaBaby knows how to put on a show,” Eugenio said. “I only know two of his songs, but it doesn’t matter. The energy carries throughout Pauley.”

And yet, while there were moments of pulsing energy, a strange air surrounded this year’s Bruin Bash. Masego’s jazz music did little to energize the crowd at the beginning, and DaBaby failed to recover from that initial poor impression, resulting in many students leaving before the performance’s end. But fourth-year sociology student Gabriella Ruvalcaba said she had more pressing concerns with what an increasingly aggressive crowd could mean for the future of Bruin Bash.

“People should just listen and scoot back, but no matter what they’re just going to keep running forward,” Ruvalcaba said. “I feel like (Bruin Bash) is just going to get shut down.”