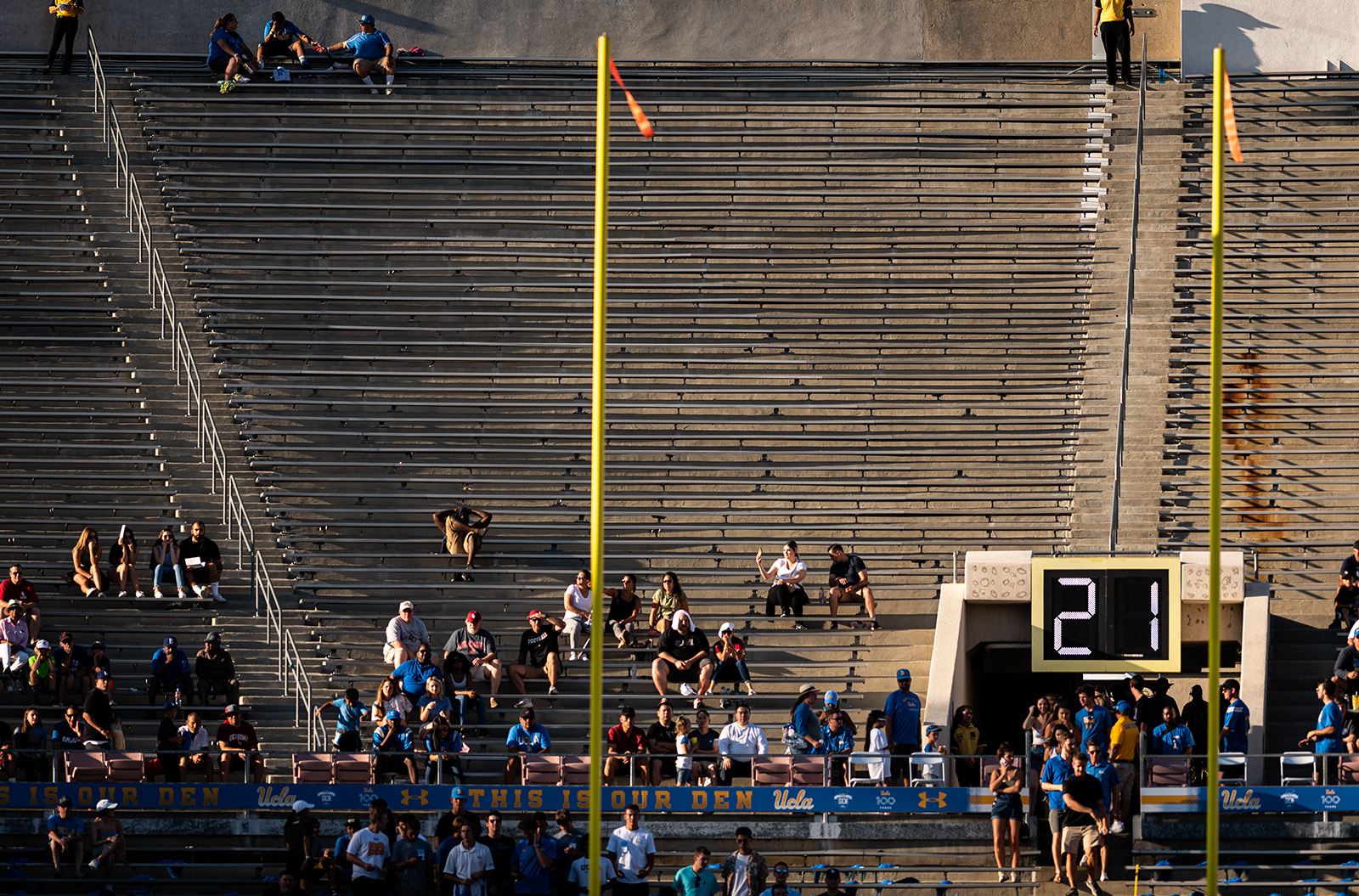 UCLA football’s average attendance at the Rose Bowl has dipped again in 2019, continuing a decades-long trend of increasingly empty home games. The Bruins had roughly 20,000 no-shows when they hosted the Sooners on Sept. 14. (Liz Ketcham/Photo editor)

“UCLA” is one of the most important four-letter combinations in college sports.

I had always kept an eye on UCLA sports growing up in Massachusetts, but since both of my parents went to Boston College, the Eagles were my No. 1 team. Coming from the East Coast, it was usually difficult to find time to watch late-night UCLA games, so I must admit that I wasn’t really a fan until I was admitted in May 2017.

From that point on, however, I have been a die-hard Bruin through and through.

The only issue? I was one of the few, not the many.

Part of a dying breed, a long-forgotten fantasy – the UCLA fan.

That isn’t to insult any hardcore fans out there – I’m friends with a lot of them and I see plenty flock to Twitter every Saturday. The fans who are still around care deeply about their team, I just don’t see as many as I expected when I decided to come to a flagship public university with 30,000-plus undergraduate students and 118 NCAA championships.

The University of Michigan – which has the largest alumni network in the world – has “Go Blue.” Texas has “Hook ’em Horns,” USC has “Fight On” and Alabama has “Roll Tide.”

At UCLA, the commonplace expression to say to a passerby also donning blue and gold is a simple “Go Bruins,” but it doesn’t carry as much weight as other competitive catchphrases.

When I was at a movie theater in New York City two weeks ago, I saw a woman wearing a UCLA shirt. As our paths crossed, I offered a quick, “Go Bruins!”

She looked at me, smiling awkwardly, and said absolutely nothing.

Was that an isolated incident or statistical outlier? It’s very likely the answer is yes, but I can’t imagine someone wearing crimson and white reacting like that to “Roll Tide.”

UCLA football hasn’t won the Pac-12 since 1998, so it’s not like Bruin fans have had a perennial contender to cheer for. But even when the team succeeds, the general public’s interest is short-lived.

It may be unfair to judge UCLA fans with numbers from two decades ago, but it’s more of the same in this generation.

Then-sophomore quarterback Josh Rosen missed half of the 2016 season due to injury and the Bruins failed to make a bowl game, but an average of 67,459 fans showed up to the Rose Bowl for gamedays regardless. Even though Rosen was healthier in 2017 when he helped lead UCLA to the Cactus Bowl, the average attendance dropped to 56,043.

Sifting through the numbers and trying to make sense of UCLA’s attendance is a thankless task. There is no rhyme or reason to it other than the fact that the Bruin faithful are unreliable and unpredictable.

In an attempt to wrangle their erratic fanbase, The Den and UCLA Athletics announced a year-long contest Sept. 13 with a full year of tuition as the grand prize. The two organizations released an eight-item checklist for Den Pass holders to complete, essentially requiring students to attend all six home football and all 18 men’s basketball home games in order to win the sweepstakes.

Second of all, this stunt didn’t even work.

The contest was announced less than a week after UCLA hosted San Diego State in front of a crowd of 36,951 fans – the fewest number of people at a Bruin football game since 1997. Everyone knew attendance would be an issue for the matchup, but this was an apocalyptic scenario – it forced UCLA’s hand.

In addition to the tuition competition, Athletics sent an email to every Den Pass and season ticket holder offering four free tickets for the game against No. 5 Oklahoma the following Saturday. The first 4,000 fans to enter the Rose Bowl were offered free McDonald’s breakfasts.

But not even Egg McMuffins could persuade the Bruins’ absent fanbase.

I’m not going to act like I have a solution – I am not even close to being qualified to break down the issue thoroughly enough to find a concrete fix. Whether you want to blame the quarter system, West Coast sports culture, competition from nearby high-profile professional teams or the multitude of other activities for students around Los Angeles, one thing is clear.

Attendance is an issue and the fanbase has become lethargic.

I don’t expect things to change before I graduate. I know Guerrero won’t be able to turn the tides that quickly, so a lot of these problems will inevitably get dumped onto his successor’s plate.

But when I come back to the Rose Bowl as an alumnus, I hope I’m not the only one in the stands.