The Quad: Plant-based products continue to sprout up as attractive meat alternatives 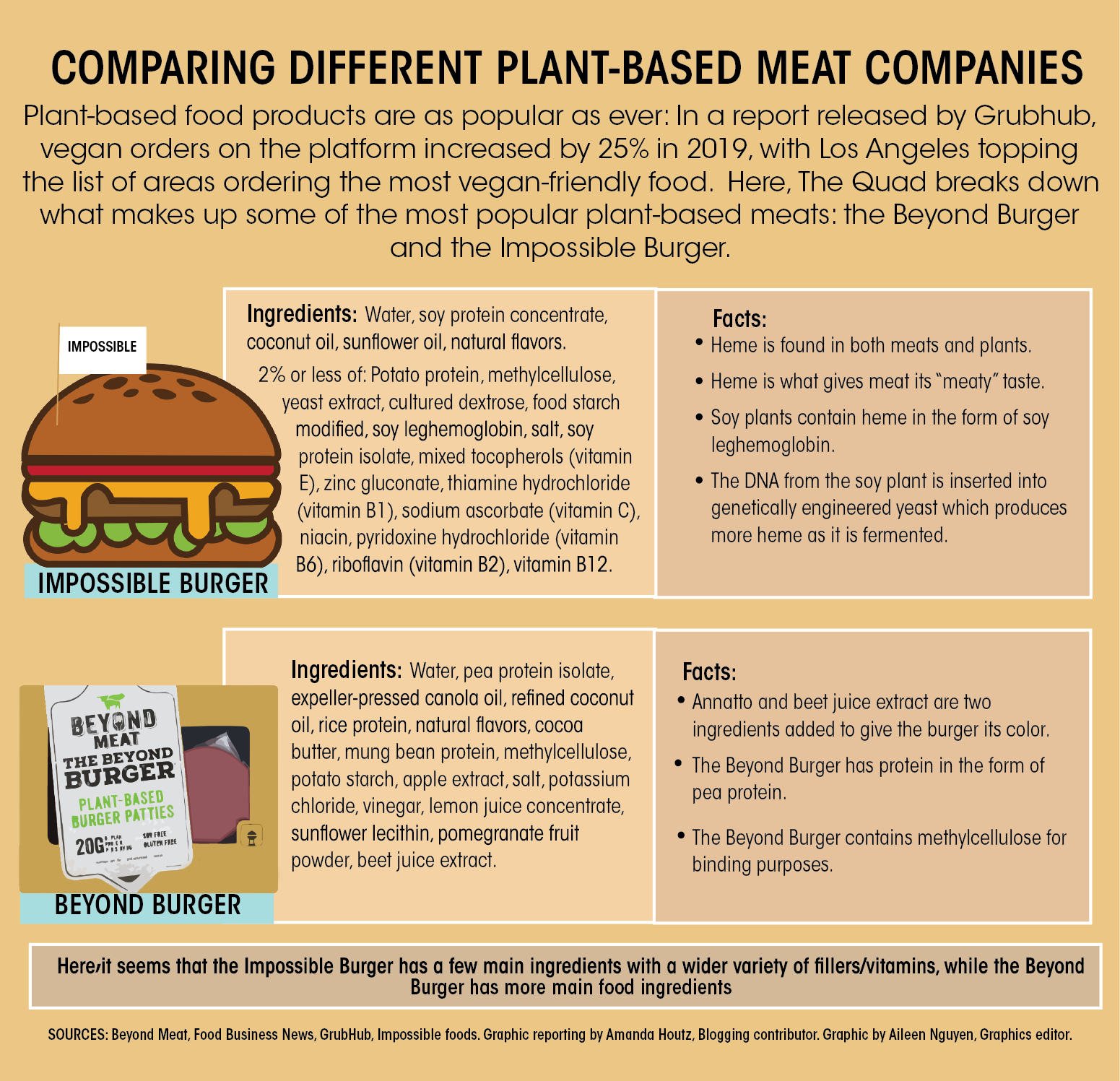 The prospect of eliminating all meat products from our diets may have, at one time, seemed infeasible – perhaps even “Beyond Impossible.”

However, with the rise of plant-based meats, this once inconceivable lifestyle now seems within reach. Plant-based meat substitutes, such as burger patties headlined by companies like Beyond Meat and Impossible Foods, are intended to replicate the look, taste, and texture of animal meat.

Meat substitutes in the past were typically composed of compressed vegetables or soy. Though viable alternatives to meat, almost all of the sensory properties of these products were slightly off the mark. Today, the goal of the new variety of plant-based meat companies is to imitate meat as accurately as possible.

It appears that these substitutes have become appetizing enough to attract meat eaters as well. In fact, approximately 95% of people who bought a plant-based burger this year were not vegetarians or vegans.

This skyrocketing growth is complemented by the facilitated accessibility of these products. Impossible Foods and Beyond Meat products can be found at fast-food restaurants such as Burger King, White Castle, Carl’s Jr. and Del Taco. According to MarketWatch, 228 million plant-based burgers were served this year at fast-food restaurants like these.

A convincing plant-composed recreation seems to mean a longer list of ingredients as companies attempt to replicate beef using non-beef products. This poses the question: What exactly is in these burgers?

According to the company’s website, the Beyond Burger “looks, cooks, and satisfies like beef.” To accomplish this feat, the patty is composed of 17 ingredients including pea protein isolate, methylcellulose and a list of other potentially eyebrow-raising ingredients.

The Impossible Burger has a similarly lengthy list of ingredients, but one of the most notable is soy leghemoglobin, a form of heme. Heme is found in both plants and animals, and it is said to be responsible for the signature meaty taste we find in animal products. Soy plants contain heme in the form of this soy leghemoglobin, but due to difficulties in extracting this compound directly from the plant, Impossible Foods created a type of yeast to make this compound.

Though “plant-based” usually connotes that a food is clean and nutritious, the creative ways these companies have used to imitate meat may have called into question the health of these meat substitutes.

The Impossible Burger has fewer calories, less total fat and less sodium than the Beyond Burger. However, as compared to a regular beef patty, the Impossible Burger has the same amount of fat, more sodium and more calories. Additionally, skeptics point to the fact that next to the long list of ingredients in the burger substitutes, old-fashioned burgers only have one ingredient: beef.

With respect to the calories, fat and sodium levels of these plant-based patties, it appears they are no healthier than a regular burger. However, it is important to note that their goal is not to be a health food. Rather, they are attempting to mimic meat products that are not exactly health foods themselves.

The health debate may remain, but one thing is for certain – plant-based meats are significantly better for the environment.

The University of Michigan’s Center for Sustainable Systems conducted a study on Beyond Meat that reported the Beyond Burger uses 99% less water and generates 90% less greenhouse gas emissions compared to a beef burger. A similar study conducted by Quantis on the Impossible Burger indicated that the Impossible Burger uses 87% less water and produces 89% fewer greenhouse gas emissions than its beef counterparts.

Dana Hunnes, a clinical dietician at the Ronald Reagan UCLA Medical Center with a research background in climate change, food security and the environment, endorses plant-based meats like the ones produced by Beyond Meat and Impossible Foods.

“For anyone who’s craving ‘that meaty texture’ from a burger, for example, I absolutely think that Beyond Burger and Impossible Burger and burgers that are just like that recreate a lot of that taste, that texture and that flavor that people are craving,” Hunnes said. “(The plant-based burgers are) significantly better for the environment by reducing the amount of water it takes to create that patty and the amount of carbon (output) into the environment to create that patty.”

Alongside their environmental benefits, these meat substitutes have the potential to make a significant impact in alleviating animal maltreatment within the meat industry.

The American Society for the Prevention of Cruelty to Animals reports that most of the 10 billion land animals farmed for food every year in the United States live in “unacceptable conditions.” Animals on these farms can experience overcrowding, unsanitary conditions, indoor confinement and man-made alterations to their bodies.

On a similar note, Amber Canavan, senior campaigner with People for the Ethical Treatment of Animals, denounced the marketing claims of some meat companies that use labels that suggest the animals used for meat are enjoying a higher quality of life.

“Consumers are being misled by the marketing of these companies, and the only truly humane meat is the vegan meat. We have so many options that we simply don’t need to be killing animals to get the delicious, nutritious, tasty foods that we enjoy,” Canavan said.

With all of these factors considered, the reason behind the fascination with the plant-based meat industry becomes apparent. And, as evidenced by Beyond Meat’s gain of over 550% from its IPO pricing as of June 10 and Impossible Foods’ fundraising total of more than $775 million, it appears that the plant-based meat industry is just getting started.