‘Once Upon a Time … in Hollywood’ production crew restores 1960s Westwood 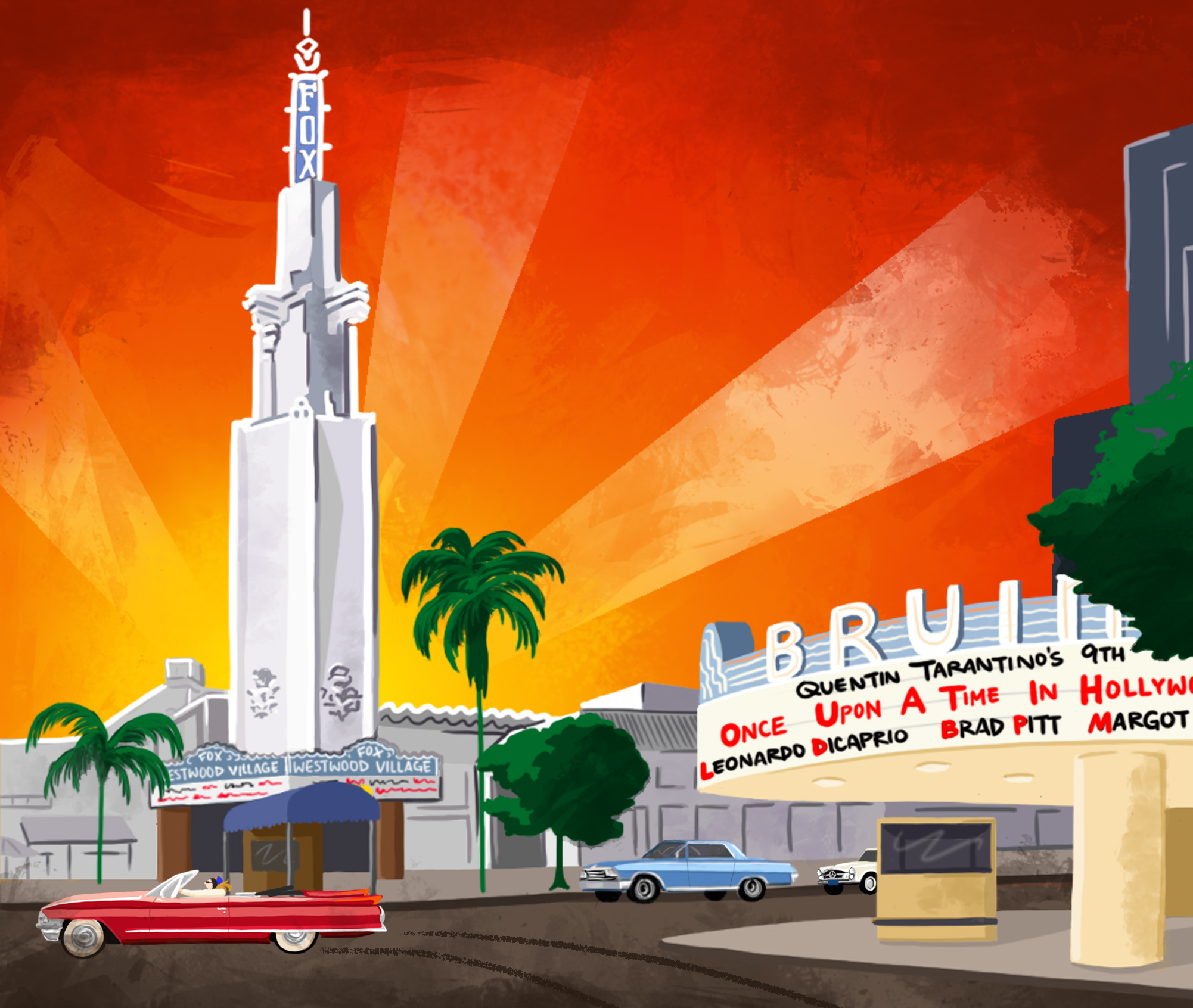 A current UCLA student thrown back in time to 1969 still could’ve enjoyed a snack from Stan’s Donuts.

They might be shocked, however, to find a quaint Italian cafe in place of the beloved neighborhood Starbucks.

Thanks to Quentin Tarantino’s new feature, “Once Upon a Time … in Hollywood,” historic Westwood businesses were restored to their previous 1960s appearance. Like other Los Angeles sites, the intersection of Broxton and Weyburn avenues received a makeover for Tarantino’s film released Friday, featuring Leonardo DiCaprio as fictional, soon-to-be-forgotten Western star, Rick Dalton, and Margot Robbie as the real-life actress Sharon Tate. It’s on-location filming transports audiences back five decades to a retro Los Angeles – mini skirts, milk trucks and all.

Retro LA wasn’t too hard to find as members of the art department drew on personal experience and memory to recreate landmarks. Alumnus Richard Johnson, who served as supervising art director for “Once Upon a Time … in Hollywood,” said the theaters on Broxton Avenue are symbols of 1960s LA, ones he recalled from adolescence.

“I saw innumerable movies in both of those theaters at that corner, and lived on that side of the city for more than three or four decades,” Johnson said. “I was fairly young at that point in time, but it still left good memories. (The production) was just going back to something I knew.”

Since being built in the 1930s, the Regency Village Theatre and Regency Bruin Theatre have seen countless movie premieres and stars over the decades. Johnson said one of Robbie’s scenes occurs at the Bruin Theatre in the film – her character attends a showing of Tate’s 1969 movie, “The Wrecking Crew.” The scene called for a redesign of both theaters’ marquees, changing the images above the cinema entrances to display black-and-white, back-lit titles.

Luckily, the theaters had mostly maintained their original look, Johnson said, while other parts of Westwood Village required significant facade adjustments. This included the Taco Bell directly next to the Bruin Theatre, which was once a Hamburger Hamlet restaurant.

The Taco Bell location, which appears in the background of several shots in the film, did not allow the production crew to rip out the restaurant’s interior, said Barbara Ling, the film’s production designer. Instead, Ling said her team recreated Hamburger Hamlet’s old school red booths and green-striped awnings by covering up the pre-existing furniture. Those simple touches evoke the now-nearly extinct burger chain at glance, she said.

But returning Stan’s Donuts to its former aesthetic was Ling’s favorite Westwood reconstruction, as she said the production brought back Stan’s original red awnings and signage. Stan Berman, the store’s founder who opened the shop in 1965, became emotional upon seeing the return of its former appearance during filming, Ling said. The fact Stan’s Donuts has remained a constant in Westwood since that time and can be seen in “Once Upon a Time … in Hollywood” is a testament to the longevity of the shop itself, Ling said.

Ling, who also grew up near Westwood, said extensive research was required to transform the Village back to its historic state. Photographic evidence from UCLA’s archives, as well as private collections, filled in the holes in her memory, she said.

“The shoe store, the clothing store, Hamburger Hamlet, Stan’s (Donuts) and the movie theaters are all kind of iconic, but it’s all the little places in between,” Ling said. “That’s the best part; the texture of it is really researching to get the places you would never remember.”

This attention to detail was crucial, she said, as the filming of “Once Upon a Time … in Hollywood” required changes to Westwood’s streetlamps and newsstands. One major challenge involved Broxton and Weyburn avenues’ intersection, as the scenic department had to repaint the lines on the street for historical accuracy. This task had to be completed quickly, including repainting the modern lines. Ling said this is a relatively new problem, one she hadn’t encountered during her design of Oliver Stone’s 1991 film “The Doors,” also featuring 1960s Los Angeles.

“We (now) do what we call zebra crosswalks, where they are big wide stripes and there are four across. None of that existed in the ’60s, it was just two white lines,” Ling said. “Besides the facades, there is a lot of infrastructure that must be changed to get it back.”

The Westwood Village Improvement Association aided the “Once Upon a Time … in Hollywood” production with the smaller street details, such as moving anachronistic trashcans and benches, said Megan Furey, the association’s marketing and communications manager. The association communicated with businesses that would have their storefronts affected, and Furey said the production acquired permits for streets to be shut down so they could park vintage 1960s cars by the curb. Despite the disruption – which shutdown several stores and blocked off roadways – the reality of a major motion picture filming in the area was exciting, Furey said, as this hadn’t happened since “Paul Blart: Mall Cop 2,” released in 2015.

“We chatted with (the production company) about the impact (filming) would have on the businesses, kind of what their scope was, how long they were going to be here. We were very honored to have it be a location,” Furey said. “Westwood back then, and now, is still a prominent place in the film industry.”

Johnson said he hoped students unfamiliar with Westwood’s history would be drawn to see the film to learn more about lost businesses. The recreation of settings for the film did include an element of nostalgia, he said, in addition to the extensive research.

“We did everything we could to suit the story. It’s called ‘Once Upon a Time … in Hollywood’ because it’s not a documentary by any means,” Johnson said. “When somebody starts with the words ‘once upon a time,’ that’s generally a fairy tale or fiction. … When you see the movie, you’ll understand.”