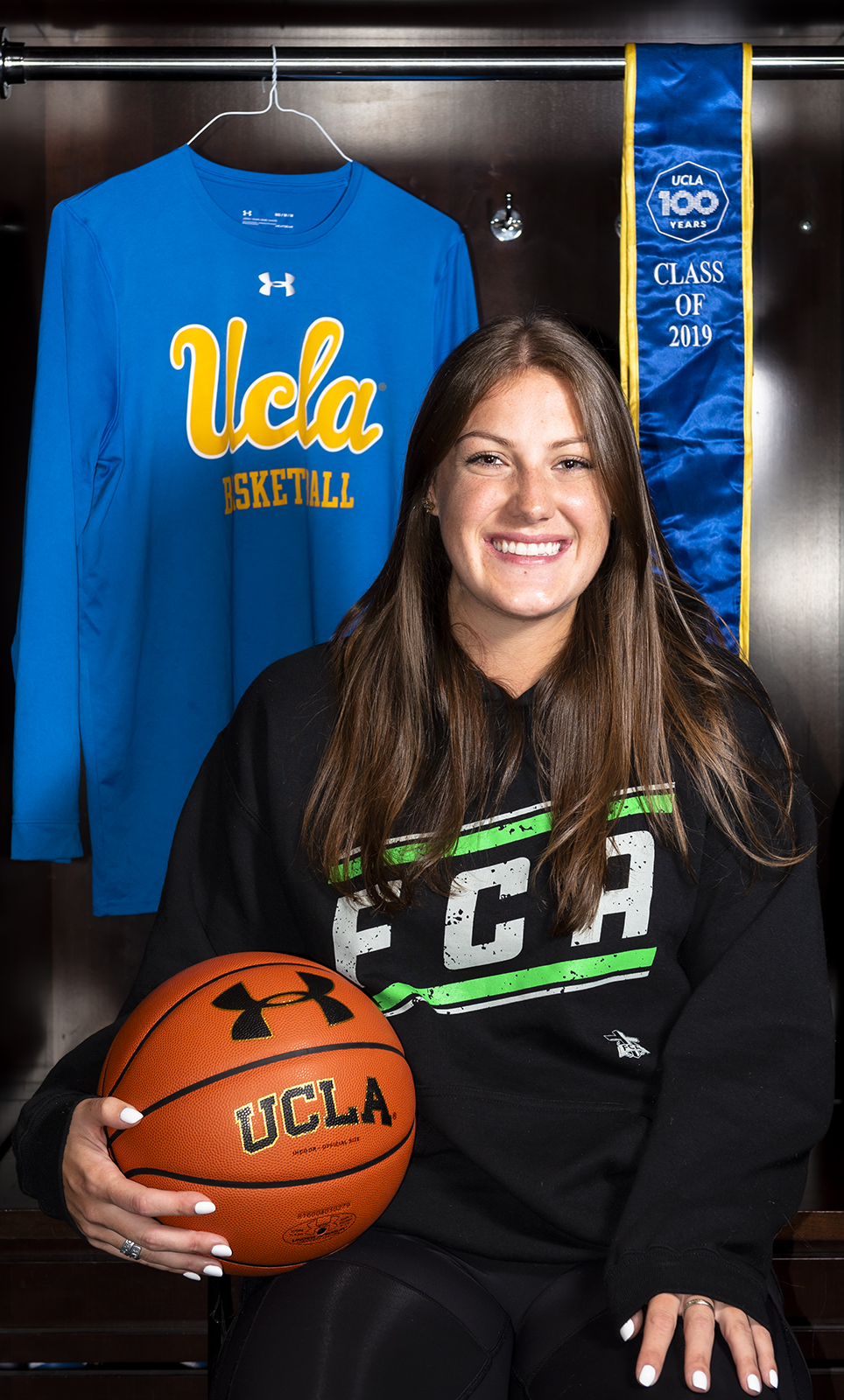 Chrissy Baird was a part of the UCLA women’s basketball team for five seasons before graduating. After leaving her sport behind, the guard struggled to redefine herself outside of athletics. (Tanmay Shankar/Assistant Photo editor)

Almost everyone has a rehearsed way they introduce themselves when they meet someone new.

It’s those few words that follow a person’s name and explain what they do – a job, a major, a sport. For Chrissy Baird, those words were, “I play basketball at UCLA.”

“I was meeting all these new people that I had never met before and I would say, ‘Oh hi, I’m Chrissy and I –’ and I had never done that where I didn’t know what to say next,” the former UCLA women’s basketball guard said. “This was the first time I kind of thought, ‘I’m just Chrissy, that’s it. I hope that’s good enough for you.’”

Baird realized her inability to introduce herself properly was a product of a greater problem – the loss of her identity without basketball.

The Wheaton, Illinois, native had played basketball since she was 5 years old. She said since she came from an athletic family and had always been pretty good growing up, the “basketball player” label just stuck.

“I think I just kind of got used to (basketball) as my ‘thing;’ that was always my ‘thing’ and I never had to find anything else,” Baird said. “I think that’s why it’s hard now.”

In the four months since she graduated and stopped playing basketball, Baird has noticed she gets fewer likes on her Instagram pictures. She no longer receives messages from little girls telling her what an inspiration she is. She stopped seeing her face flash across ESPN.

But it was time for the next stage of her life. And she had a plan.

The UCLA women’s basketball coaching staff put a system in place to guide its athletes into the real world.

Associate head coach Shannon Perry-LeBeauf said she and coach Cori Close created a “Pro Plan” for each senior. The plans included weekly and monthly check-in points designed to build the players’ futures by breaking the process into smaller steps.

The Pro Plan was originally designed to help former Bruins Jordin Canada and Monique Billings prepare for the WNBA, but it grew into a broader practice for the team.

“We decided to try to do something like this no matter what they’re trying to do (after college) because the thought is they’re all going to go pro in something,” Perry-LeBeauf said. “So what do they need to do to make sure that they’re ready when they leave here?”

Baird was one of the players who would be going pro in something other than basketball. She said her goal was to work for the Fellowship of Christian Athletes to serve as a mentor for others like her.

Baird attended FCA camps as a child and had a mentor, Kristin Stockfisch, through FCA in high school. During college, Baird served as a camp counselor and became a leader in an on-campus Bible fellowship to continue ministry even without FCA.

Through the fellowship, Baird met UCLA beach volleyball assistant coach Jenny Johnson Jordan, who became a mentor for the basketball player. Baird said her relationships with Stockfisch and Jordan made her want to be a guide for others.

“I couldn’t have imagined going through this period of my life without having someone like (Stockfisch and Jordan),” Baird said. “I think I realized the power of those relationships in my athletic experience so … I saw (FCA) as the opportunity to be that person for somebody else.”

With a future in ministry in mind, Baird began attending meetings with Close to develop her Pro Plan. Close also had an affiliation with FCA, and together the pair worked through markers that eventually led Baird to an interview and a job offer.

Four days after her final basketball game as a Bruin, Baird accepted a job at UC Santa Barbara working for FCA. She said an outsider might have assumed she was transitioning smoothly, but internally she was struggling with the loss of basketball.

“You all thought I was doing just fine – I’m living in California, I just moved to Santa Barbara, I live 10 minutes from the beach,” Baird said. “My life might look a certain way, it might look like I’m having a good time, and I’m actually having a hard time.”

Perry-LeBeauf said she experienced a similar sensation after she stopped playing basketball at Iowa and attended graduate school as a “normal” student.

“It’s just a long process that you’re a part of and then all the sudden it does get you where you want to go, and now what?” Perry-LeBeauf said. “Even though you know what you’re supposed to do, it’s still hard.”

Writing it into existence

Baird expressed her feelings by writing – a passion she had been pursuing quietly for years.

Jordan had heard Baird give a few speeches she had written for fellowship events and her senior banquet, and the coach said she was impressed with Baird’s ability to talk about her struggles so openly.

“The transparency that she has kind of mixed with the vulnerability and strength is something I’ve always really admired about her,” Jordan said. “I just love how willing (Baird) is to talk about the duality of you can be having this really great life and you can be going through a lot of struggles at the same time.”

One of the products of Baird’s writing is a blog articulating her loss of identity after basketball.

“I just didn’t share it because I was like, ‘Well nobody really asked my opinion,’ and so I’m just offering my thoughts to the world that aren’t asked,” Baird said. “But then I thought that’s part of it, that there’s courage in that – nobody asked but I’m going to tell you anyway.”

Jordan said the blog post especially resonated with her, as she was a former athlete who went through a similar identity crisis.

“The things (Baird) was writing, I was like ‘Oh, my gosh, that’s so true,’ about how ‘What do you do?’ and ‘I’m Chrissy the basketball player,’ how people would introduce her,” Jordan said. “I totally remember all that.”

Baird no longer receives messages from young girls who were inspired by her ability on the court, but she has gotten responses from people her own age and older who relate to her story.

“You’re not going to see my face flash across ESPN anymore, but my words are reaching people, so how do I find value in that?” Baird said. “Just because it’s different doesn’t mean it’s bad or less than what it used to be.”

Baird said speaking publicly about how she felt and the positive reception of her blog helped her realize that her life after basketball can still be meaningful.

She just had to stop searching for a new tagline to introduce herself.