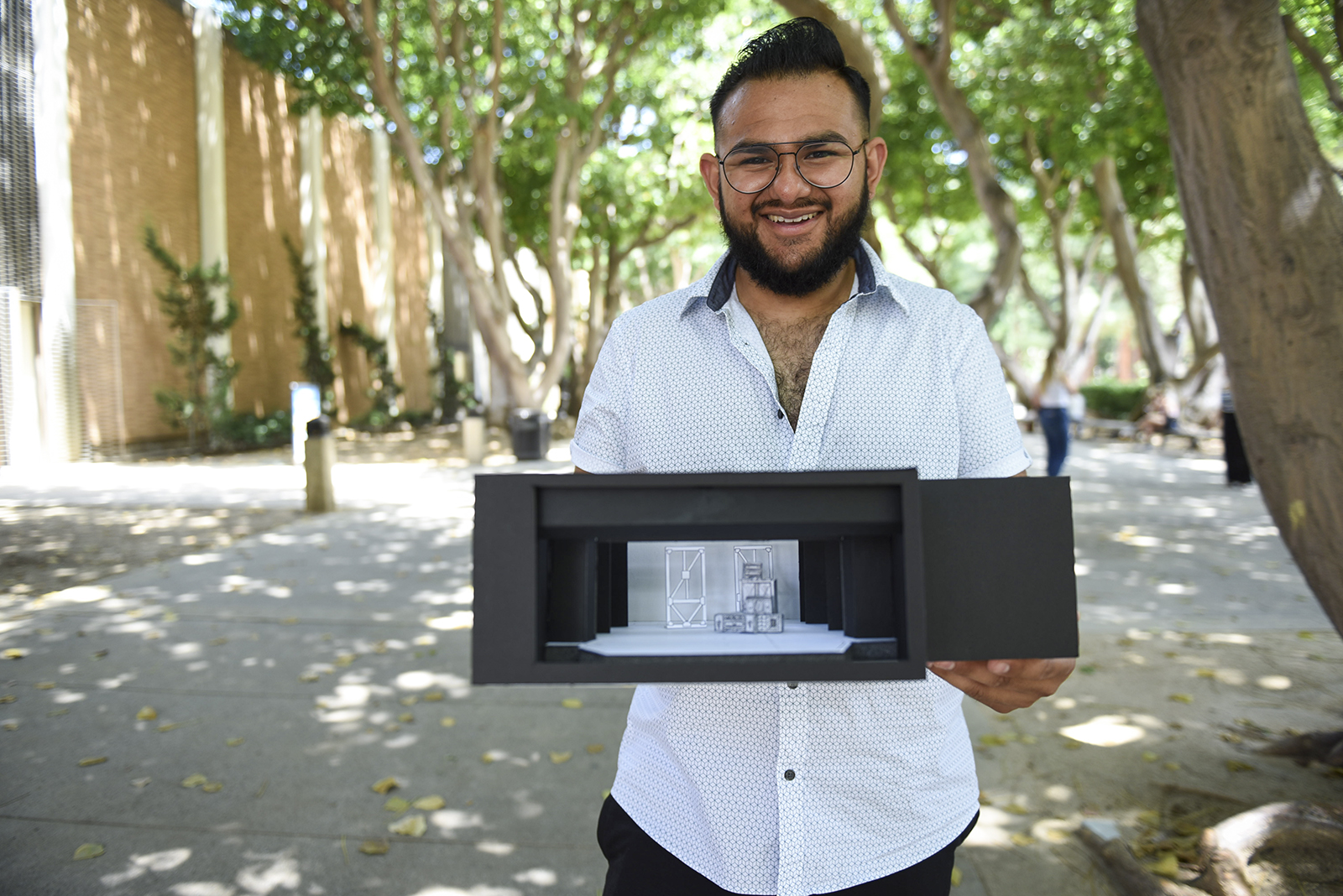 Alumnus Oscar Escobedo is spending his summer working as the scenic designer for the College Light Opera Company’s festival season in Massachusetts. While there, he will help design and build sets for different plays each week, as well as teach students the different elements of set design.
(Niveda Tennety/Assistant Photo editor)

Oscar Escobedo and a crew of six students had three hours to strike the set of “H.M.S. Pinafore” before an audience came for a showing of “Crazy for You” on the same stage.

This summer, the alumnus is working as the scenic designer for the College Light Opera Company’s 51st festival season, lasting through Aug. 24 in Falmouth, Massachusetts. Escobedo is designing and building the sets for nine musicals and operas as the company premieres a new show each week throughout the summer, he said. On top of the time crunch, he’s also leading a team of students to teach them the various elements of building a set, from painting techniques to using the basic tools necessary to craft the scenery.

“We’re constantly building for the next show, designing for the show three shows ahead. It’s a constant overlapping,” Escobedo said.

CLOC opens a new show in its season every Tuesday night for a run that lasts through the following Saturday. The company’s fast-paced schedule requires the crew to be about halfway done preparing the costumes and set for the next week’s show a week in advance, said Chloe Moore, the costume designer for the first five shows of this season.

“You really need to be firing on all cylinders when it comes to collaborating, designing, communicating to your director, but more importantly managing the teams that you’re given,” Moore said.

As the scenic director for the season, Escobedo is not only constantly collaborating with those around him, but he said he must always consider the best way to visually tell a story. Scenic design relies on figuring out how to best supplement the narrative of the shows through physicality and aesthetic, he said, as opposed to the musical, lyrical or linguistic elements written into a show’s libretto or score.

“I think what a lot of people don’t understand about what scenic design is (is that) it’s our way of physically telling a story,” he said. “We are helping the story be told through physical location (and) physical metaphors.”

As he begins working on each show, Escobedo said he looks at a script and works with the director and other collaborators like the costume designers to determine just what their aesthetic vision is for the show. Escobedo said he keeps an eye out for metaphors and symbols that he can use on stage to help further the story. For example, in “Knickerbocker Holiday,” one of the shows in CLOC’s rotation, the set requires a noose – a symbol that Escobedo said the show uses to signify that the show deals with themes of death.

Before he arrived in Massachusetts, Escobedo said he had already designed the sets for the first three shows of the season. Now, he has completed designs for the entire season and is working with his team of students to actually build them in the scenic shop and get them set up on stage, ready for an audience.

While most of his students are majoring in theater, Escobedo said they are generally quite new to scenic design. As a result, he’s had to teach them different techniques such as how to use power tools and how to utilize quick painting techniques that can be used to produce an illusion of creating wood or rust.

Sophia Baramidze, the incoming costume designer for the final half of the festival season, said this is her first time directly overseeing a crew on such a large scale. Baramidze anticipates that instructing a group of students with varying levels of experience with costume design will be a particularly demanding but gratifying task.

“It’s really rewarding to see people getting excited to learn a new skill that they haven’t developed before or haven’t had the chance to experience,” Baramidze said.

On the other hand, Moore said that, because of her prior experience working as a teaching assistant, the aspect of teaching students isn’t particularly new to her. However, as a TA, she’s used to working with students who are more familiar with costume designing. At CLOC, she said she’s had to work to make sure that she’s explaining everything as clearly as possible, since some members of the crew had little to no prior experience with the skill coming into the theater company.

Moore said it’s been important to work on finding a balance to make sure the students are learning as much as they can about the field while also putting on high-quality theater. Moore and Escobedo both said their experiences thus far in the rapid-fire environment of CLOC have allowed them to form tight-knit bonds with their teams – but on top of that, Escobedo said he and his collaborators are picking up new skills every day they work together.

“We’re all doing things out of our comfort zone, and something that a lot of my students and a lot of my collaborators say is, ‘Well, I learned about 17 things today, at least,’” Escobedo said.