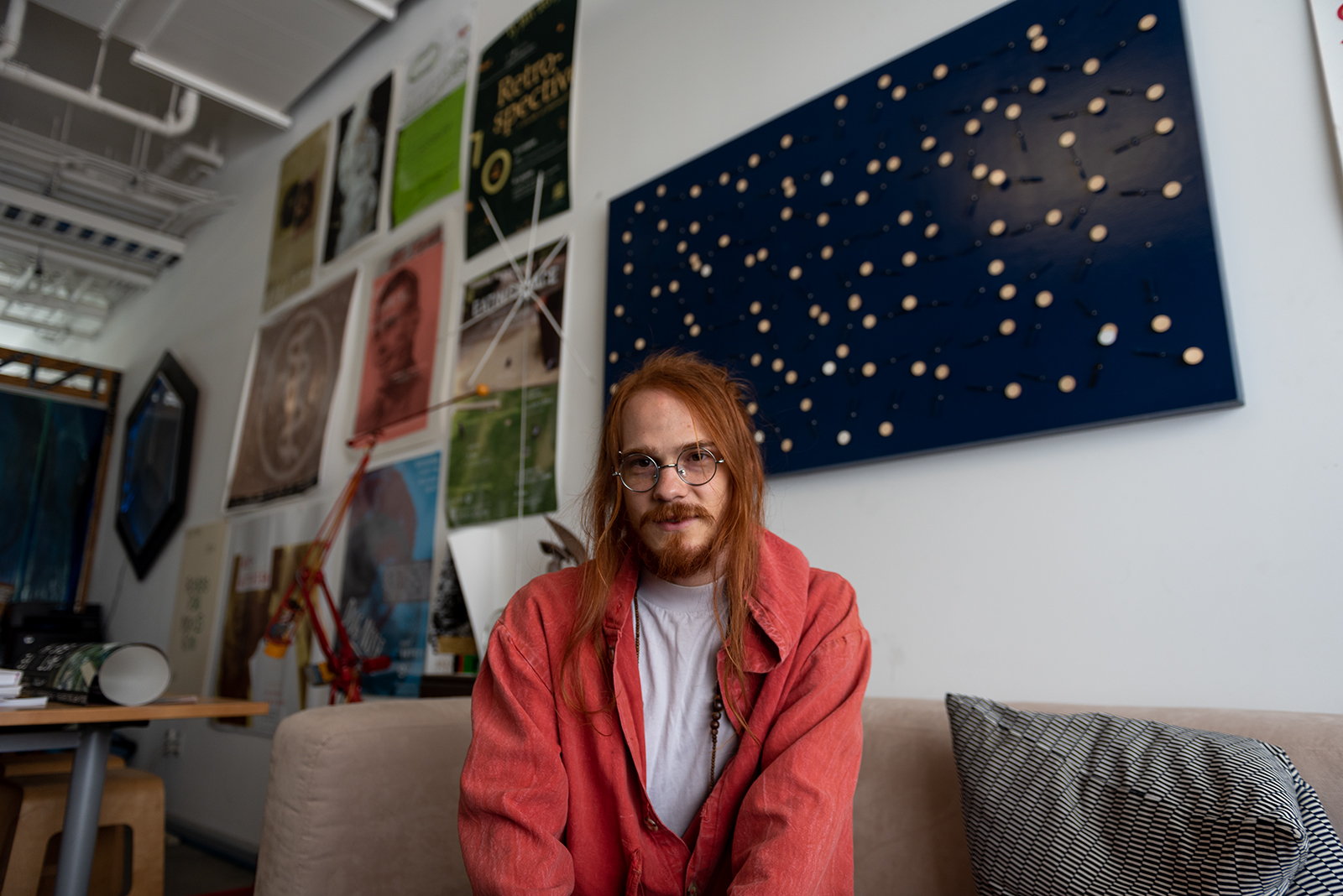 Incoming fourth-year design media arts student Dillon Bastan creates art that typically incorporates music from synthesizers and sounds from the spaces around him, such as gadgets creating repetitive noises or a metal can being kicked by audience members. He said his work appears simple, as he does not add extra embellishments, instead focusing on the sounds he creates.
(Axel Lopez/Daily Bruin senior staff)

Dillon Bastan was instructed to draw for an art class – but instead he made his own invention.

Such projects are typical for the incoming fourth-year design media arts student, who said he uses his knowledge of programming and circuitry to make art with sound. His projects incorporate music from synthesizers and sounds from the spaces around him, or include gadgets repetitively creating noise through circuitry and audio interaction.

Bastan said an appreciation of nonmusical sounds and his passion for inventing led him to begin creating art in 2015 that combines the two.

“I got more into music technology, and I was able to program custom music solutions, that led me to programming something for a motor,” Bastan said. “Then all of a sudden, I started making sound sculptures.”

Initially fueled by both curiosity and not wanting to draw himself, Bastan said the assignment in his class led him to create a sound sculpture that could draw for him. In the piece, microphones are attached to a piece of paper, and a speaker is attached to a marker. The microphones and speaker create feedback, which causes the speaker to jump around from the sound vibrations, producing an abstract drawing on the paper.

Sound artists Eldar Tagi and Lena Pozdnyakova, known as the2vvo, have collaborated with Baston for years. When he and Tagi were roommates in 2012, Tagi said Bastan would work on small projects – some as simple as card games that he made up himself.

Each game required its own system of causes and effects, which Tagi said translated to designing the interactive sculptures. For example, Tagi said Bastan had a project where a metal can could be kicked by the audience, and the sound would be amplified through a series of circuits.

“Every project has its own set of small rules,” Tagi said. “That’s in installation and performance work as well. So that’s where the interactivity element comes from.”

Bastan said his pieces look unfinished – like they are still in development – because he stops working on them after he has expressed the main message he hopes to portray to his audience. Focusing purely on the main component of each project – creating the noise – is a better use of his time than adding unnecessary embellishments, he said.

Pozdnyakova said Bastan’s classes have pushed him to look at art through multiple narratives and theories and have steered him toward viewing his projects conceptually in a larger context. He previously had been focusing more on technical problem solving, such as figuring out the best way to build an instrument.

“He still does (problem solving) but it’s heavy on the concept. And we don’t mean that he was not thinking about that before as well,” Pozdnyakova said. “But now he also puts it on display so that other people can actually learn.”

This summer, Bastan said he will be performing occasionally and working on spontaneous projects that he will post to social media. A previous performance featured a workout routine where he attaches sound-producing sensors to his body and amplifies them to the audience, he said.

Bastan said his artwork is not always trying to be profound, but instead it’s actually revealing new experiences of sound to the audience. By focusing in on natural, nonmusical sounds, such as eating at a dinner table, Bastan said his projects encourage audiences to appreciate them in the same way they appreciate music.

“I’m interested in doing other things with sound just to explore other experiences. Music is usually trying to take you away somewhere else or create its own mood,” Bastan said. “But I’m thinking, ‘Oh, how can we use sound to appreciate the experience (here) more?’”