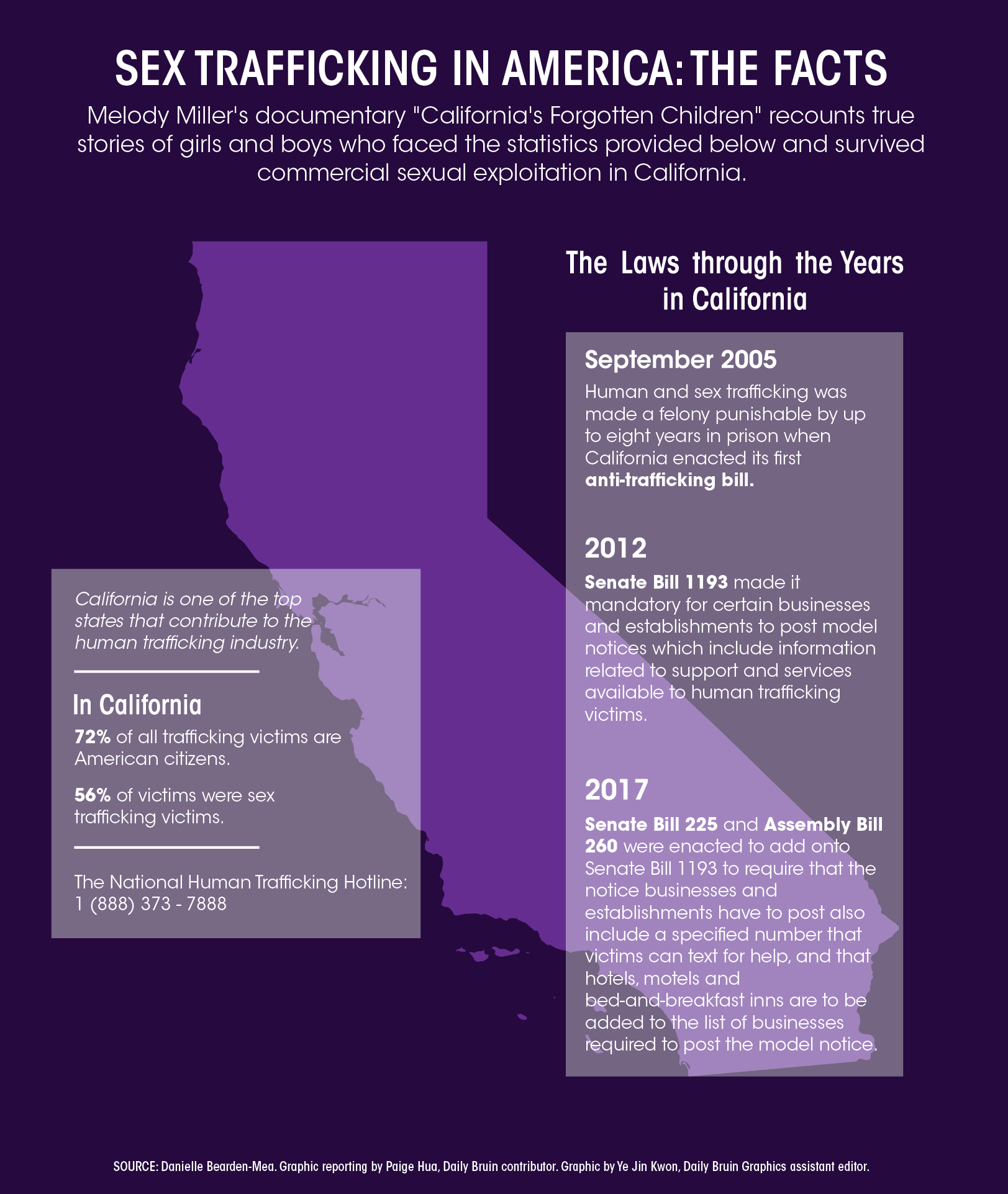 Melody Miller first discovered the reality of sex trafficking in the United States while volunteering in high school.

The alumna’s time with an organization called MISSSEY – Motivating, Inspiring, Supporting & Serving Sexually Exploited Youth – opened her eyes to the fact that kids from her own California high school were being trafficked. This led Miller to create a ten-minute promotional film for MISSSEY – the first iteration of her documentary, “California’s Forgotten Children” – which she said grew into a full-length feature at UCLA in the School of Theater, Film and Television.

Since its release, the film has garnered the attention of California Sen. Kamala Harris, who invited Miller to screen the film in Washington, D.C., in front of members of Congress on June 26. Miller said she hopes her documentary will lead lawmakers to be impacted enough to continue enacting laws that prevent sex trafficking and provide aid to victims.

“I think a lot of the people who are making the laws don’t listen to the stories of survivors and have no clue about what commercial sexual exploitation is and the amount of time it takes to heal and recover,” Miller said.

When she initially set out to make the film, Miller said she was extremely cautious in approaching both who was interviewed and how she visualized the victims’ stories. Showing the faces of children who are currently being trafficked would put their lives in danger, Miller said, or might lead them to eventually come to regret documenting their lives for the public.

To avoid this, Miller said she selected older people who were more comfortable sharing their stories in front of a camera. As for visual recreations of the victims’ experiences, Miller said she decided to use conceptual imagery, such as a single image or shot that implies a larger story.

In struggling to figure out the best way to illustrate survivors’ stories, Miller said she recruited the help of alumnus Jason Knutzen. Together, he said they decided to use visual storytelling that was not too graphic, yet would allow the audience to understand what the forms of trafficking might be and the dangers many people face.

Visually, Knutzen said the goal to provide more symbolic scenes also led them to focus more on creative aspects, such as exaggerated lighting.

The effect was not a replica of traditional home or natural lighting, he said, but rather featured heavy contrasts similar to that of an action or sci-fi genre film. Such elements help emphasize the suspense and impact of the survivors’ stories without the need for a graphic, literal recreation of what the survivors struggled through, Knutzen said.

“We didn’t want to make it feel like real life. We’re not necessarily recapping every single thing that’s happening in their story point by point,” Knutzen said. “It’s more about playing on the mood and feeling of how they were at that point in their lives; the scenes are symbolic.”

But the mood and tone of Miller’s documentary was also dependent on the choice of music, which will directly affect how audience and congress members will perceive the film, said Stephen Spies, an alumnus and the music composer of “California’s Forgotten Children.”

When presented with a scene of a recreation or interview, Spies said he collaborated with Miller to find the right instrument that could enhance the story of a survivor. Spies said he looked at various instruments to accomplish this, whether it was violins, guitars or pianos. This resulted in each survivor being paired with a specific instrument as they told their story, which Miller said provided another cue for audiences to know who was speaking.

From music composition to cinematography, Miller said every aspect of the film is a call for the funding of safe homes and prevention programs.

However, Miller stresses education most of all, not only for students but for teachers, hospital workers and police officers, so that there are more people out there able to recognize the signs of trafficking and help those trapped in the system.

“I hope that we’re able to change the laws to help children who have been commercially sexually exploited in the whole United States, so no child is forgotten about and no child is left behind,” Miller said.