Game of Zoning: How Steve Sann’s appeals have obstructed businesses in Westwood 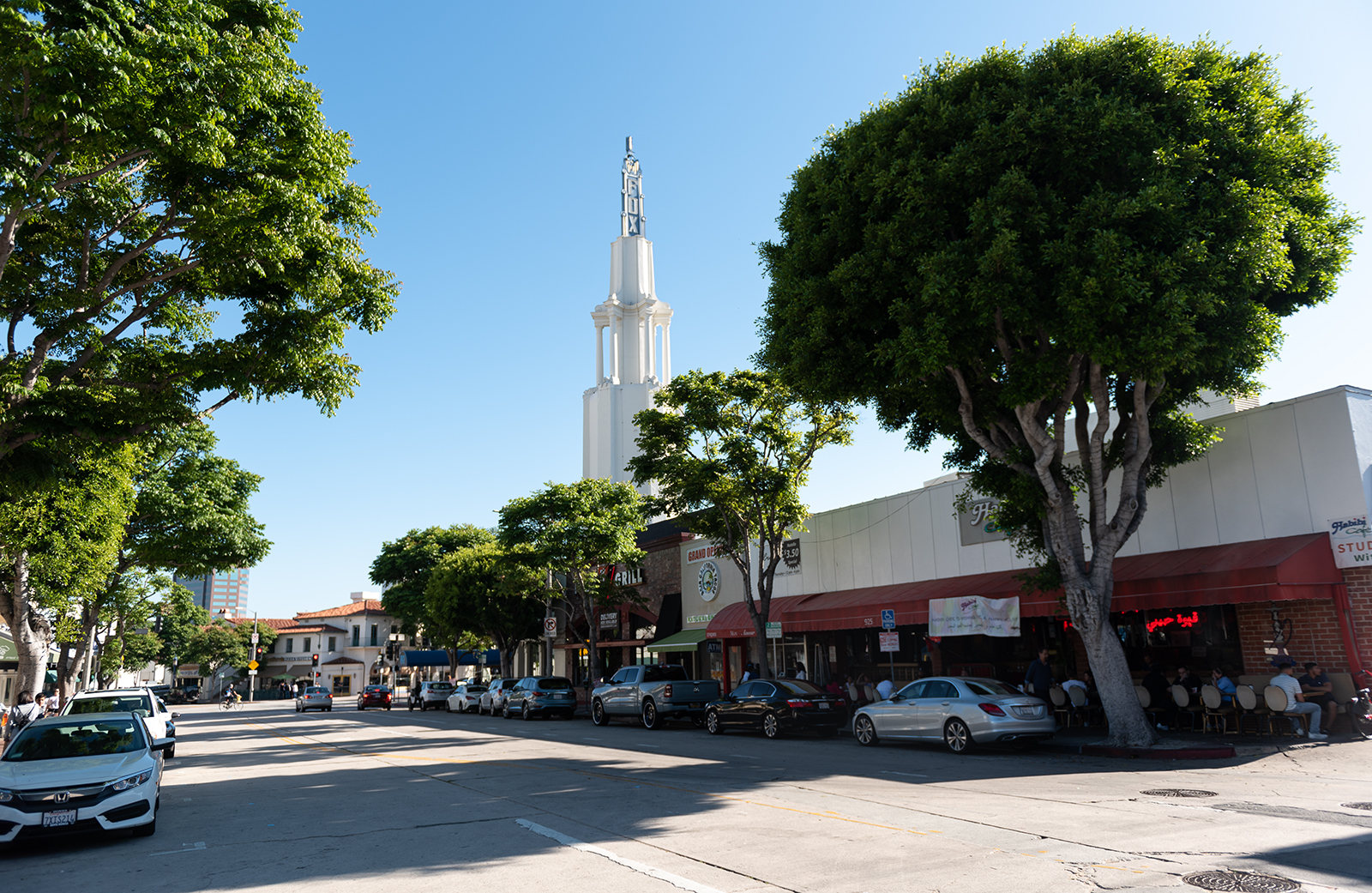 Almost two-thirds of appeals made against businesses in Westwood over the last two decades have come from three individuals. Steve Sann has filed 23 of Westwood’s appeals since 1998. (Tanmay Shankar/Assistant Photo editor)

Businesses in Westwood have experienced difficulty operating due to appeals and protests – and 61% of the appeals in the last 20 years have been lodged by three community members: Steve Sann, Sandy Brown and Wolfgang Veith.

Appeals are requests to change a project proposal that has been approved by the Los Angeles Department of City Planning. Businesses and properties can be appealed for violations of city planning ordinances and operation.

Protests are letters of opposition to an establishment receiving a license to sell alcohol on their premise and are sent to the California Department of Alcoholic Beverage Control.

Sann, chair of the Westwood Community Council, has filed 22 of Westwood’s appeals since 1998 and protested 16 establishments on their liquor licenses, including Target, D1 Cafe, Tocaya Organica and iPic Theaters, according to California ABC documents. Of the 16 protests, seven are letters of conditional support, in which Sann asked for additional conditions to be placed on businesses’ alcohol permits such as no happy hour discounts or no serving alcohol in pitchers.

Similarly, while most of Westwood’s appeals are not granted, the process costs the city $13,538 per appeal, according to city planning documents.

Now, Sann protests the licenses directly to the California ABC until the conditions are met and later withdraws them. Of the 16 protests, Sann has withdrawn eight and only three have gone to a public hearing.

Margaret Taylor, CEO and senior consultant for the consulting firm Apex LA, said applying for a city conditional use permit takes about eight months and going through the Westwood Design Review Board application takes four months.

When appeals are filed, a project manager at city planning creates a report to send to the West Los Angeles Area Commission where they either decide then or host a public hearing to grant or deny the appeal.

Brewer said he thinks Sann is a chronic protester who uses the system to put pressure on businesses coming into the Village.

Sann said he appeals projects because he cares about Westwood Village.

For example, Sann, who has expressed opposition to serving alcohol unconditionally and time-sensitive happy hours, appealed and protested Spireworks, a Mediterranean fast-casual restaurant, in 2016 because he said the area was overconcentrated with alcohol-licensed businesses, according to city planning documents.

At the public hearing for Spireworks, Sann said the business should not receive their license in part because of its close proximity to UCLA.

Additionally, Broxton Brewery was appealed in 2018 by Sann based on conditions not legally required by the city. Taylor, who represented Broxton, said Sann appealed because the zoning administrator did not include extra conditions he wanted.

Sann requested that Broxton refrain from selling alcoholic beverages in pitchers and in quantities over 16 ounces and for last call to be no later than 30 minutes before closing, according to city documents.

Taylor said these were practices the owners were already following.

“I think the uniqueness of how (Sann) appeals projects as opposed to others is that he is more concerned about obstructionism than the outcome,” Taylor said. “This was a nuisance appeal more than a substantive appeal.”

Broxton incurred a $2,000 fee from the city and the project was stalled by four to five months, Taylor said.

A handful of individuals also file appeals in other West Los Angeles neighborhoods, like Venice and the Palisades. Duncan said the Department of City Planning cannot do anything to prevent individuals from filing excessive appeals because it is a public process and anyone has the right to appeal a plan.

Sann is a longtime active resident of Westwood, starting in his undergraduate years at UCLA in 1977. He has created numerous associations and councils composed of stakeholders and initiated numerous community service and entertainment events in Westwood, he said.

Prospective businesses often encounter Sann by reference of the Westwood Neighborhood Council and other community leaders because of Sann’s knowledge of Westwood’s history and inner workings, he said.

Cameron Keller, a third-year political science student who was a member of the WCC, said Sann uses his title on the unofficial board to leverage power and legitimize his role in the Village.

However, Sann said his advising and appeals are separate from his role on the WCC, a nonprofit he started to work closely with the WWNC. The WWNC, along with the North Westwood Neighborhood Council, are advisory boards that are officially recognized by the city of Los Angeles, unlike the WCC.

In a voice recording shared to the Daily Bruin by Michael Skiles, former president and current renter stakeholder of the NWWNC, Sann said to Skiles at a NWWNC meeting that he would oppose any business that does not present to the WCC.

Sann has acted as an informal advisor and community advocate for businesses opening and operating in Westwood. As an individual stakeholder and the chair of the WCC, Sann has also played a role in determining what comes into the Village.

The Community and Sann

Sann’s longstanding involvement in Westwood has led to strict abidances to the zoning ordinances and mixed feelings within the community.

Some business owners are scared of Sann based on his influence and ability to stall their restaurants from opening, said Josh Simms, a Westwood landlord.

Sann’s involvement in the Village also resulted in a lawsuit that was later withdrawn from Medcafe, which operates Skylight Gardens, in 2013 for slander. The lawsuit alleged that Sann had spread a rumor that Skylight Gardens was closing, which led to customers pulling out party reservations and employees leaving, according to court documents.

In a letter to the Westwood Village Improvement Association, a nonprofit organization tasked with improving the state of Westwood Village, Shirin Shojapour, a project manager at D1 Cafe, said Sann pressured the WWNC to reverse their its support of D1’s conditional use permit by speaking to the WWNC land use committee members individually while Shojapour was speaking.

Lisa Chapman, president of the WWNC, said Sann appeals because he cares about the Village and is trying to preserve it.

Sann said he will work with anyone who wants to help the Village thrive.

Wendy-Sue Rosen, the former chair of the Brentwood Community Council and community advocate, has worked with Sann for the last decade and said she has experienced similar backlash from her community. Rosen has filed appeals and lawsuits against developers in Brentwood for the last 20 years.

“The appeals process is set up to give the community a voice,” Rosen said. “(Sann) should be applauded as a champion. We’re fine if someone doesn’t follow code if the benefits are worth it, but what we see is all the detriment and no benefit when developers break regulations.”

Community members voiced opposition to individuals who abuse the appeals process and asked to revise the system at a NWWNC meeting in May.

The council discussed discouraging people from making appeals by increasing the cost of each subsequent appeal, Skiles said.

Skiles said he has yet to hear back from Los Angeles City Councilmember Paul Koretz, who represents Westwood and surrounding areas.

“Businesses just can’t afford to spend years and fortunes fighting (Sann’s) appeals and protests over their liquor permits, food service plans, architecture and parking,” Skiles said. “This is sadly forcing businesses to pursue opportunities outside of Westwood, leaving the storefronts of what should be a vibrant college town chronically vacant.”