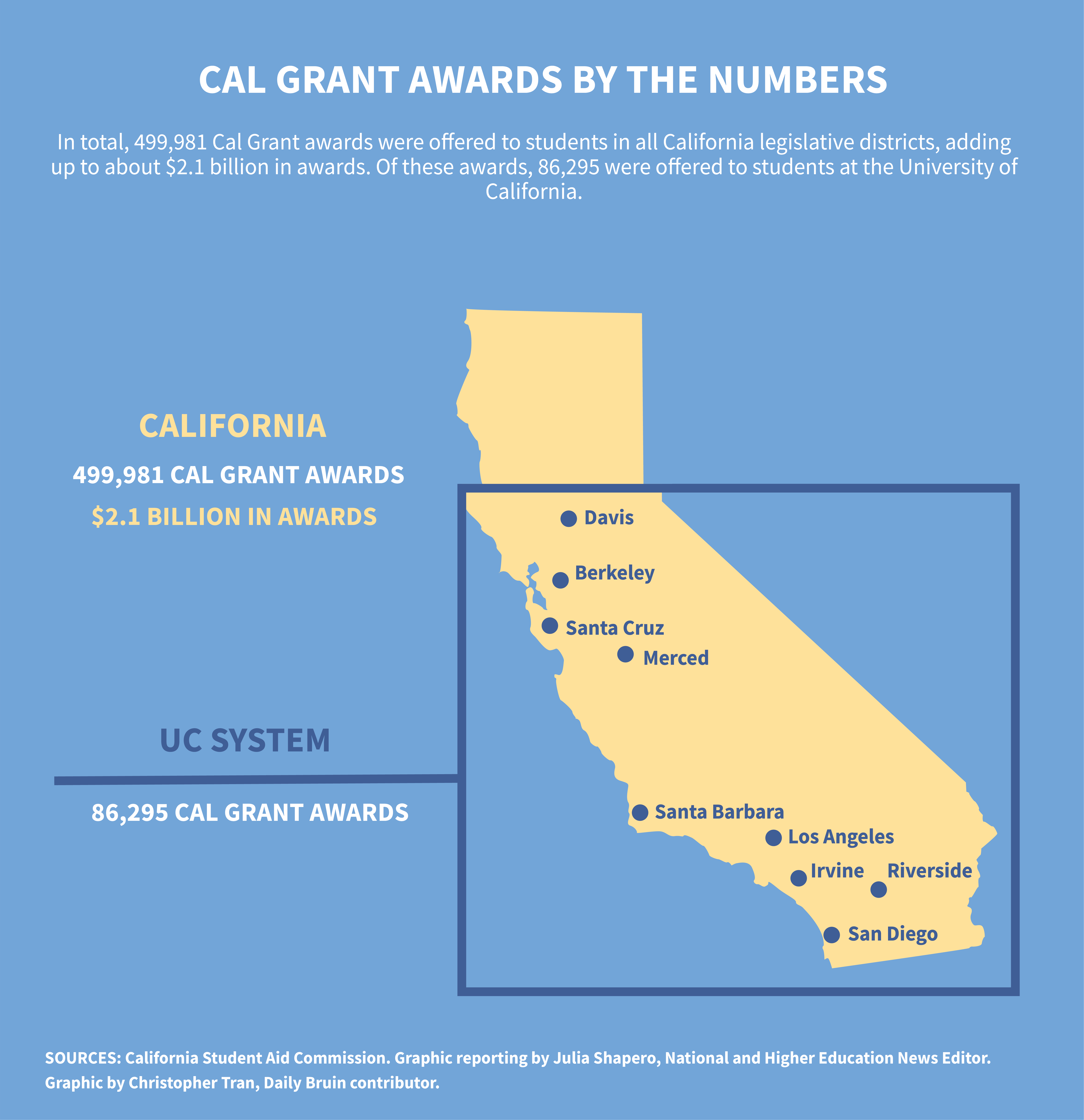 Assembly Bill 1314 would phase in reforms to the Cal Grant programs to further expand and simplify them. AB 1314 was passed by the California state assembly on May 24 and is currently going through the legislative process in the California Senate.

Undergraduate students in the United States graduated with an average student debt of $28,650 in 2017, according to The Institute for College Access and Success. This is up from $12,750 in 1996.

Eligibility for the Cal Grant, under the new bill, would no longer be based on GPA, age and years out of high school. Medina said this would allow nontraditional students, who don’t go to college right after high school, to have access to financial aid.

“Students today are not the same traditional students that they were 20 years ago,” Medina said. “We see more working adults, working parents, and these would be individuals who may not qualify for Cal Grants today (but) are going to school and would benefit from Cal Grants.”

Under the current Cal Grant system, students who qualify for Cal Grant A or Cal Grant B are guaranteed a Cal Grant if they meet requirements for the Cal Grant Entitlement Program, according to the California Student Aid Commission, the state agency in charge of administering financial aid.

Cal Grants A and B differ in their eligibility requirements and financial aid coverage, but they are both for students seeking a bachelor’s degree.

UCSA is a coalition of students and student governments in the UC system, including UCLA’s Undergraduate Student Association Council, that advocates for students and participates in the shared governance of the UC.

Arasasingham, who is also USAC’s legislative director, said USAC advocated for the bill as part of UCSA’s systemwide priorities.

“We’ve met with dozens of legislators and staffers in the (Los Angeles) area, both in district here in Los Angeles, but also up in Sacramento,” Arasasingham said. “We’ve hosted phone banking and letter writing sessions, and then we’ve sent student advocates to Sacramento almost weekly, to push for (AB 1314 and other bills) to the finish line.”

AB 1314 would further provide a Summer Cal Grant award for two summer terms to students who qualify for Cal Grant A or B without it affecting their awards during the regular academic year. Medina said providing financial aid over the summer can help undergraduate students graduate within four years.

“I think a lot of students, as they try to complete their college degree in a timely manner, find that going to summer school is almost a necessity,” Medina said. “I know when I was a student, I went to summer school, and that was helpful to me. And I think it would continue to be helpful to students today.”

AB 1314 would also consolidate the Cal Grant A, B and C programs and the Middle Class Scholarship into one program. Medina said the current Cal Grant system is too complicated and hasn’t been reformed in over 20 years. The new system will make it easier for students to navigate, he added.

The assembly bill would also require the CSAC to develop regulations for the program by July 1, 2021.

According to the assembly’s analysis, the state legislature currently spends over $2 billion annually on student financial aid.

Medina said Gov. Gavin Newsom’s final budget, which has to be passed by June 15, will help determine how quickly reforms can be implemented.

“The cost is pretty high … so it’s not going to be done in one year,” he said. “We’re looking to see how we can phase it in.”

UC spokesperson Sarah McBride said the UC has not taken a position on AB 1314 but is sponsoring Senate Bill 461.

SB 461, which is being processed in the California assembly after being passed in the state senate, would also allow Cal Grant A and B recipients to receive Cal Grant awards for up to two summer terms without affecting their regular academic year awards, if passed.

CSAC stated in a press release that college students’ learning outcomes are affected by the rising cost of attendance, rising housing costs and food insecurities. CSAC further stated it supports AB 1314 because it follows CSAC’s recommendations for Cal Grant reform, which includes reducing barriers to accessing the Cal Grant, covering summer coursework and addressing the total cost of attendance.

Charles Nies, CSAC’s governor-appointed UC representative and the UC Merced Vice Chancellor of Student Affairs, said CSAC supports the bill, but wants to make amendments to it. He added one of the largest concerns of the bill is that it is too broad and needs to stipulate how the reforms will be carried out in an efficient manner.

Nies added there is a need for more financial aid resources to make education more accessible.

“There’s no question, particularly in the state of California, that low-income, first-generation college students and students of color are not graduating at the same rates as others,” Nies said. “(CSAC wants) to make sure that financial aid is not a barrier in students’ success.”

Arasasingham said students have been advocating for Cal Grant reform for years and will continue to do so until it is carried out.

“(Cal Grant reform) is really one of these issues that should have been fixed a while back that unites all students in improving our graduation rates, our accessibility to higher education, (and) our ability to afford higher education,” Arasasingham said.