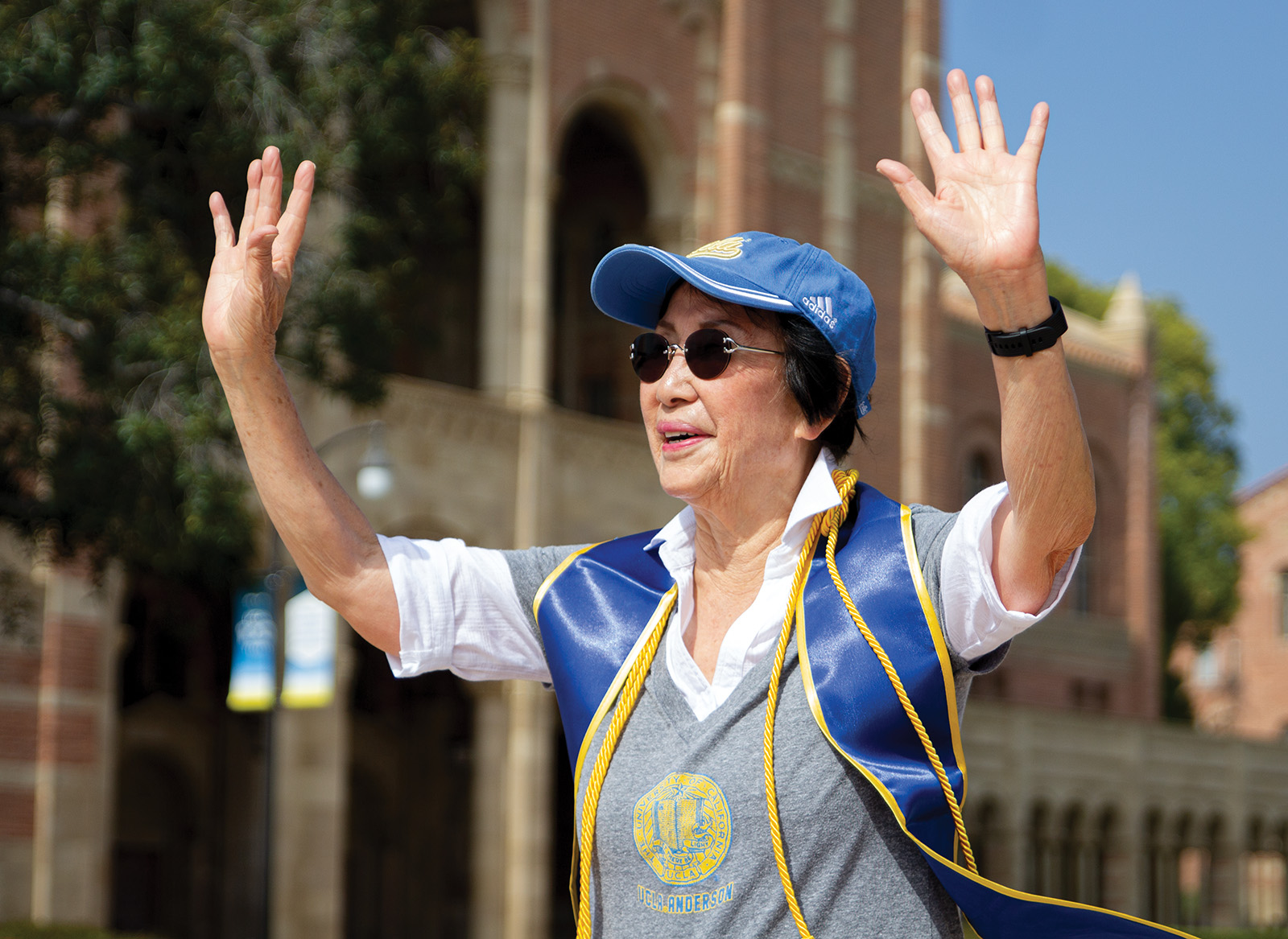 Simone King, 82, will graduate from UCLA nearly 45 years after beginning her pursuit of higher education. After her graduation, she plans to work as an intermediate in American-Korean relations. (Ashley Kenney/Daily Bruin)

Simone King is a painter, runner, golfer and tennis player, and will be graduating from UCLA at the age of 82 with a bachelor’s degree in Korean.

But despite her impressive feats, King said her degree did not come easy.

King started her education in the mid-1970s at Los Angeles Pierce College, but dropped out to take care of her children. Over the next nearly 45 years, she returned to her education multiple times, but had to leave again each time for her family or business.

However, King is a woman who always completes what she starts.

“Once I set a goal, the only way out is completion,” King said. “When the goal has reached completion, it is an automatic mechanism to build confidence. The confidence gives way to tremendous strength and heightened self-esteem.”

King was born in South Korea in 1936, during the Japanese occupation of Korea when Japan held Korea as a colony from 1910 until the end of World War II in 1945.

Growing up, she witnessed both World War II and the Korean War. She said, as a child, her family moved farther south to escape the turmoil of war. However, King was asked to stay behind with her uncle’s family as an independent.

King was forced to miss two years of schooling, but she was able to catch up and become one of the top students in her junior high school despite her difficulties.

“I learned the meaning of life (at) the age of 13,” King said. “I learned from my mother, who said, ‘In order to survive, don’t lose your consciousness,’ meaning mentally (and) physically (one should) always (be) active or continue (to) mobilize. You can achieve self-actualization.”

King immigrated to the United States in 1967, when she married her first husband who was already living and studying in the U.S. with a student visa. They divorced shortly after.

King met her second husband in 1972 while she was traveling abroad in Paris.

King said she had always wanted to pursue an education, so in the mid-1970s she enrolled in Pierce College to study psychology.

After exploring her interests by taking art, math, statistics and science courses at Pierce, King said she eventually hit the college’s unit maximum and was asked to transfer to a four-year university.

King transferred to UCLA to study psychology in 1988 due to its close proximity, but left in 1989 to continue raising her children.

“When you produce children, a woman’s No. 1 responsibility is to raise them well (and) educate them well until their independency comes,” King said.

She also assisted her second husband with his real estate business in Bel Air, serving as the business’ vice president. King’s Court, a street in West Los Angeles, is named after her husband, she said.

King returned to UCLA in 2000 to finish her degree, but left shortly after once again after the death of her second husband.

Even though she took many breaks to raise her children, King said she never lost sight of her goal to complete her education. She said the fact she had never been able to complete her degree weighed on her, so she once again returned to UCLA in 2017.

King said even though she started as a psychology student, she knew she would not be able to enter a professional career at her age. She said she changed her major to Korean in order to better understand the past, present and future of Korea and to potentially aid in improving Korean-American relations.

Her greatest challenge in returning to UCLA at the age of 80 was her difficulty understanding English, King said.

King added that she had to watch a lot of American television, as well as read different works such as the Los Angeles Times to familiarize herself with the level of English required for her rigorous workload.

Jennifer Jung-Kim, an Asian languages and cultures lecturer who taught King, said no matter the work thrown at King, she never lost her positive attitude and determination.

“It’s one thing to be able to go about your daily business, (or) even to work speaking English, but it’s quite another to be doing UCLA-level reading and writing,” Jung-Kim said. “And so not all of it came easy for her, but she just kept trying and trying, and I really admire her work ethic and her persistence.”

King also made sure to be an active participant in class and never let her voice go unheard, Jung-Kim said.

“King was really good about not feeling shy about getting to know other people in the class, sharing her thoughts, listening to their life stories,” Jung-Kim said. “So I think she’s been a real delight to have in the class.”

King said although she had difficulties with her English as well as the rigor of UCLA, she had great teachers and students to help her along the way. Fellow students went out of their ways to be supportive of her studies, King added.

Ina Na, a fourth-year history student, helped King upload assignments onto CCLE. King was grateful for the assistance and asked Na if they could have lunch together, Na said.

Na added their lunch together helped her connect with King, who was not shy to share stories with someone much younger than her.

Despite her age, King said she often remarks to her close friends and family that she is ageless and there is nothing she cannot do if she puts her mind to it.

King said after graduation, she would like to work as an intermediate in American and Korean relations and help bridge the culture gap between the two countries. She would also like to continue her painting as well as spend more time with her family.