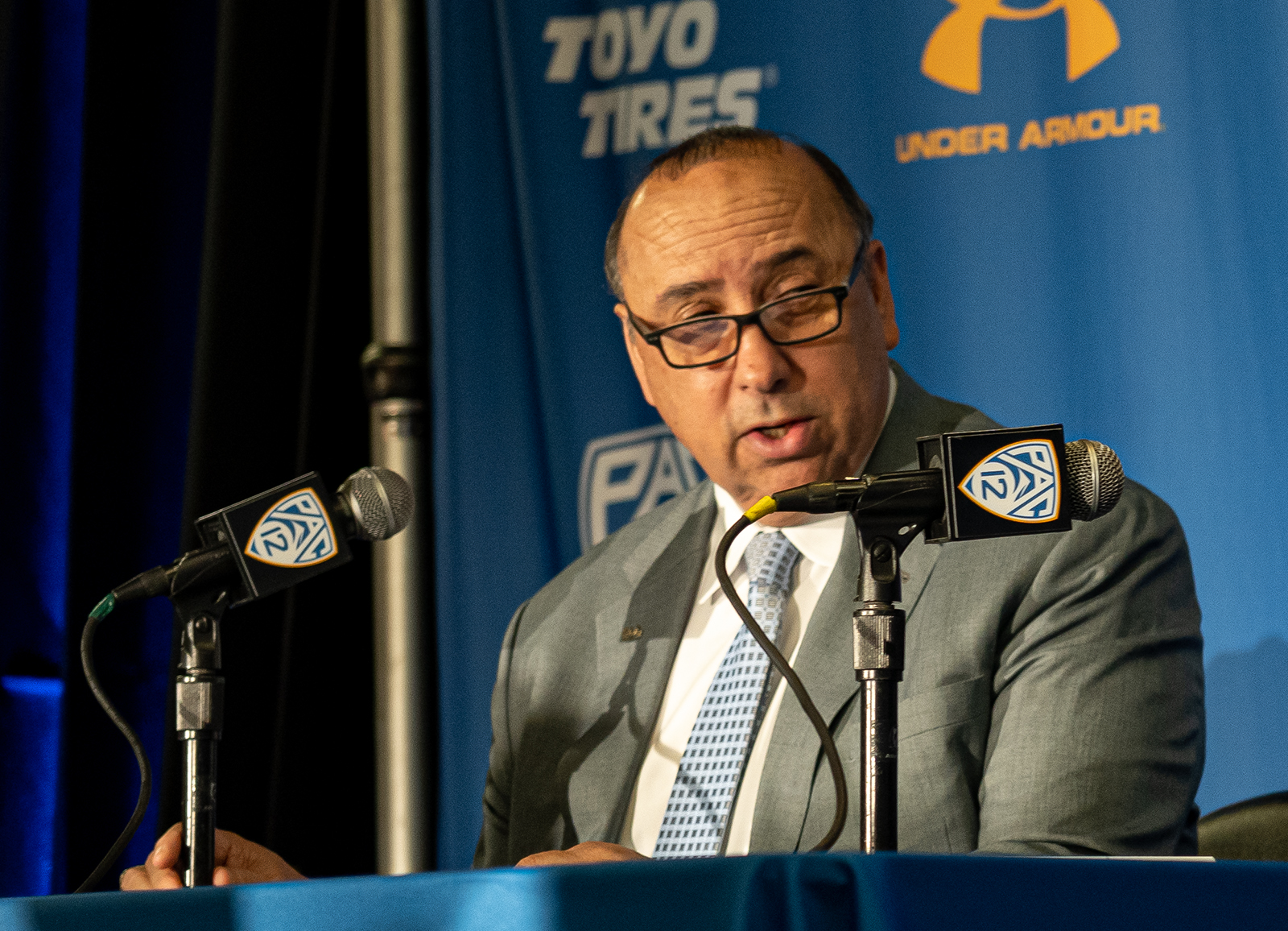 Dan Guerrero has held the position of UCLA Director of Athletics for 16 years and has seen the university win 32 NCAA titles. His contract will end at the end of 2019 barring an extension. (Elise Tsai/Daily Bruin)

Many people expected Dan Guerrero’s final exploit before the end of his contract as UCLA’s athletic director would be hiring Mick Cronin as the new men’s basketball coach in April.

They probably also thought – spoiler alert – that Grey Worm was going to die in the final season of “Game of Thrones.”

Guerrero’s current contract expires at the end of 2019 – but following Cronin’s introductory press conference April 10, Guerrero revealed that he and Chancellor Gene Block have talked about a potential extension.

Whether that extension comes to fruition or not, UCLA must make its expectations clear for whoever heads the J.D. Morgan Center next year.

Broadly speaking, there should be three key platforms that the Bruins’ future athletic director – or Guerrero if he signs another extension – should focus on: cleaning up the athletic department, standing up to Pac-12 Commissioner Larry Scott and the rest of the conference’s leadership and rebuilding UCLA’s brand.

The past couple of years have been downright ugly for UCLA Athletics, from Operation Varsity Blues to basketball players shoplifting in China to a recent Los Angeles Times report that people within the Morgan Center were aware of a cash-for-admissions scheme for years.

It’s time to get back on the ethical side of the tracks.

The next athletic director must prioritize absolute adherence to NCAA, University of California and school policies. More details about scandals may arise in the next couple of years given the scope of media attention on UCLA right now, but the new administration shouldn’t perpetuate any wrongdoing.

Critically, this rules out Senior Associate Athletic Director Josh Rebholz – who was one of the perpetrators in the cash-for-admissions scheme according to the LA Times – as a candidate to fill the position.

Secondly, the future athletic director should pressure Scott and the rest of Pac-12 leadership to catch up to the other Power Five conferences in terms of cash payouts to schools, reputation, quality of play and other metrics.

No reasonable person would expect the Pac-12 to topple the SEC in football or the ACC in men’s basketball, but one would assume that a conference with a stranglehold over an entire coast could at least match the Big Ten and Big 12 in terms of revenue.

Instead, the Pac-12 saw its revenue drop $12.5 million in the 2018 fiscal year and distributed about $31.3 million to each school, according to a tax return filed last month. The Big 12 and Big Ten reportedly distributed about $7 million and $23 million more, respectively, to all but two schools. Rutgers and Maryland received lesser cuts because of previous loans from the Big Ten.

The largest culprit for the difference is the Pac-12 Networks, which has been trampled and left in the dust by the other conferences’ gargantuan TV deals with mainstream networks. The Pac-12 has to deal with the ramifications of its failures to distribute the networks and reach its projected levels of revenue, but UCLA’s athletic director must publicly push for change instead of continuing to bolster Scott’s coffers.

The fact that the conference was unable to negotiate a deal with DirecTV to carry the Pac-12 Networks serves as an ominous warning that Scott may whiff yet again once the current TV rights agreements with ESPN and Fox expire in 2024.

As a confluence of these two factors, UCLA’s brand has suffered – this was a clear takeaway from the bungled men’s basketball coaching search whiffs that played out in the public sphere. The Bruins have not consistently been in the national spotlight since Ben Howland’s run of three consecutive Final Fours ended in 2008.

While the Wasserman Football Center and Mo Ostin Basketball Center represent a massive step in the right direction, UCLA needs to pool more resources toward upgrading facilities and resources for student-athletes, just like any other school does.

Jackie Robinson Stadium and the Rose Bowl could both use a nudge into the modern world of comfort and technology. The new student-athlete academic center is promising, but better mental health and nutritional services are arguably just as important.

And for a school that prides itself on athletics, UCLA fails to retain student turnout to home games. Obviously not everyone is interested in watching sports or has the free time to, but as the Lonzo Ball year showed, there is more than enough interest across campus to pack The Den.

A crucial priority should be to showcase more athletes to garner student interest. One example is that despite the fact that not that many students enrolled as gymnastics nuts, they still packed meets to see junior Kyla Ross, junior Madison Kocian and senior Katelyn Ohashi.

The new athletic director should lead the Morgan Center in spotlighting standout athletes in Olympic sports through social media and on campus – if students realize how dominant athletes like junior baseball pitcher Ryan Garcia and redshirt junior softball pitcher Rachel Garcia are, they will be more likely to become invested in a team.

As the longest-tenured athletic director in the Pac-12 with 16 years at the helm, Guerrero was the only one to pull in more than $1 million in salary for the 2017-18 academic year, according to The San Jose Mercury News.

It’s time UCLA and Block demand he performs up to that level of compensation by standing up for the four letters, or find someone else.

They must demand more from the head of the athletic department.