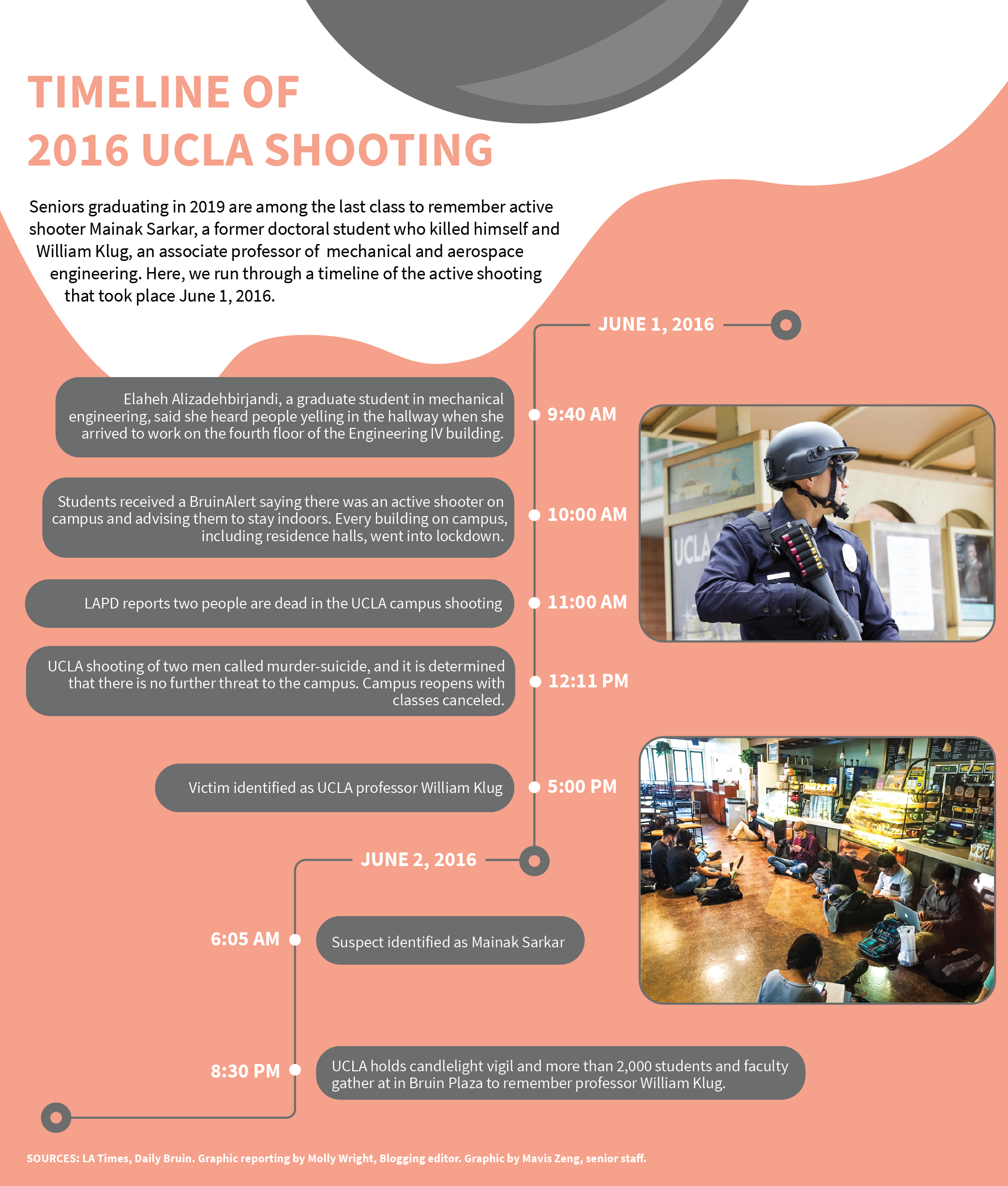 Fourth-year theater student Vivi Le still remembers waking up in her Dykstra dorm room to the loud whir of helicopters and to a phone blown up with missed calls and messages.

Le was not alone in her atypical start to the morning June 1, 2016. Thousands of UCLA students woke up to the alarming news of an active shooter on their own campus, and many more received the news only steps away from the active site.

The UCLA community was forced to think about the unthinkable – a school shooting on their home turf. Three years later, graduating seniors look back on this tragedy as an event that has taught the community a simultaneous fragility alongside resilience, but that still remains a frightening reality that can never be erased.

At around 10 a.m., all UCLA students received a BruinAlert informing them of a shooting at the Engineering IV building, commencing a school-wide lockdown.

Fourth-year history student Hubert Liu was passing the Bruin Bear on his way to class when he picked up a phone call from a friend who instructed Liu to turn around and go home straight away.

When Liu got back to his dorm, he learned that there had been a shooting on campus and immediately sought out as much information as he could get from online news outlets.

“At that point I was feeling more confused about what was happening rather than scared because I had too little information to work with,” Liu said.

Many students and faculty shared similar sentiments to Liu, whose initial feelings of confusion preceded any kind of fear. Students earnestly sought updates and clarification about the situation through word of mouth, news outlets and social media.

“You would think that the students who were actually in the school would get the fastest updates, but we were getting our information from the news as if we were outsiders,” Le said.

For many, fear took over with the spread of rumors through the community. One widely spread speculation stated that there were four active shooters, each targeting different parts of the UCLA grounds: North Campus, South Campus, the Hill and the apartments.

Director of terrorism and disaster programs at the UCLA-Duke National Center for Child Traumatic Stress, Melissa Brymer, said an individual is likely to feel at peak distress in a lockdown when forced to navigate conflicting information.

“Whether it be from Twitter or from the BruinAlerts, notifications were neither clear nor regular enough,” Brymer said.

Students who had earlier starts to their day on campus were confronted more closely with danger.

Fourth-year psychology student Nicholas Eittreim was waiting for his Chemistry 14C lecture to start in Moore Hall 100 when he and his classmates were notified of a shooting that had occurred in a building right around the corner.

Eittreim said he remembers being the most scared when they heard someone rattling the doors, trying to get into the lecture room.

“People were screaming and crying and trying to hide in between the seat aisles,” Eittreim said. “Overtime, my anxiety started increasing as I tried to grapple with conspiracies and speculations.”

The entire UCLA body was struck with fear about the possibility of an uncontained shooting.

“I felt afraid because I learned to assume the worst in situations like this,” Liu said.

At around noon, the campus reopened with a clearing from the LAPD. The shooting of two men was deemed a murder-suicide, and the gunman was later identified to be former UCLA doctoral student Mainak Sarkar and the victim, associate professor of mechanical and aerospace engineering William Klug.

Merlene Alonso, a fourth-year Latin American studies student was working her morning shift at the Sproul Hall front desk at the time.

After the lockdown was lifted, Alonso said she saw students coming back to their dorms from campus, and never forgot the looks of fear and anxiety on their faces after having experienced such a traumatic event just minutes prior.

“We hear a lot about shootings on the news, but you never think it will happen in your community,” Alonso said. “Seeing the expressions of the students who had lived the moments that news channels were documenting made it even more real.”

Shortly after the incident, UCLA worked to create spaces for mental and emotional healing in its community through Counseling and Psychological Services sessions and open group discussions.

Despite these efforts to set aside a recovery time, the campus seemed to fall right back into its normal cycle within a week from the incident – which was anything but normal, Le said. Finals week commenced, and students began to focus their attention on cramming for exams and moving out at the end of the quarter.

Eittreim said his chemistry final was made optional, as the professor understood that some students were not in the proper mental state to be studying for exams, but recalls that many of his friends still had to bear the crunch of final projects and assignments even right after the shooting.

These varying responses to the shooting weigh whether the U.S. is growing a culture of desensitization, or simply resilience.

The UCLA shooting situated itself in a larger timeline of increasingly frequent school shootings in the United States, closely following the fatal events that took place at High Point High School and Independence High School in May and February of 2016.

After the tragedy, the UCLA community worked to return to normalcy and move forward – a transition that has unfortunately become almost second nature to many Americans.

Although the event at hand was logically and emotionally traumatic, things felt oddly normal even though they weren’t supposed to be, Le said.

This raises the question: Does the road to normalcy ever exist after tragedies like the 2016 shooting, or does the nature of the world in which we live teach us to gulp our fears and persist on?

As the class of 2019 graduates this spring, fourth years will take the last of the experienced student memories of the tragedy with them.

This incident showed the graduating class how easily unfathomable situations on the news could occur on their own campus. Nevertheless, it demonstrated the importance of support and acknowledgement as a community in getting through these difficult times.

Not only did this incident spark the rise of student groups that have worked with the UCLA community to create a culture of support, it has also fostered a growing sense of student activism to implement changes in safety protocols and gun reform, said Brymer.

“Community was key here,” Liu said. “The aftermath of this event brought the UCLA community even closer together in a moment of brief mourning and remembrance of this tragedy.”