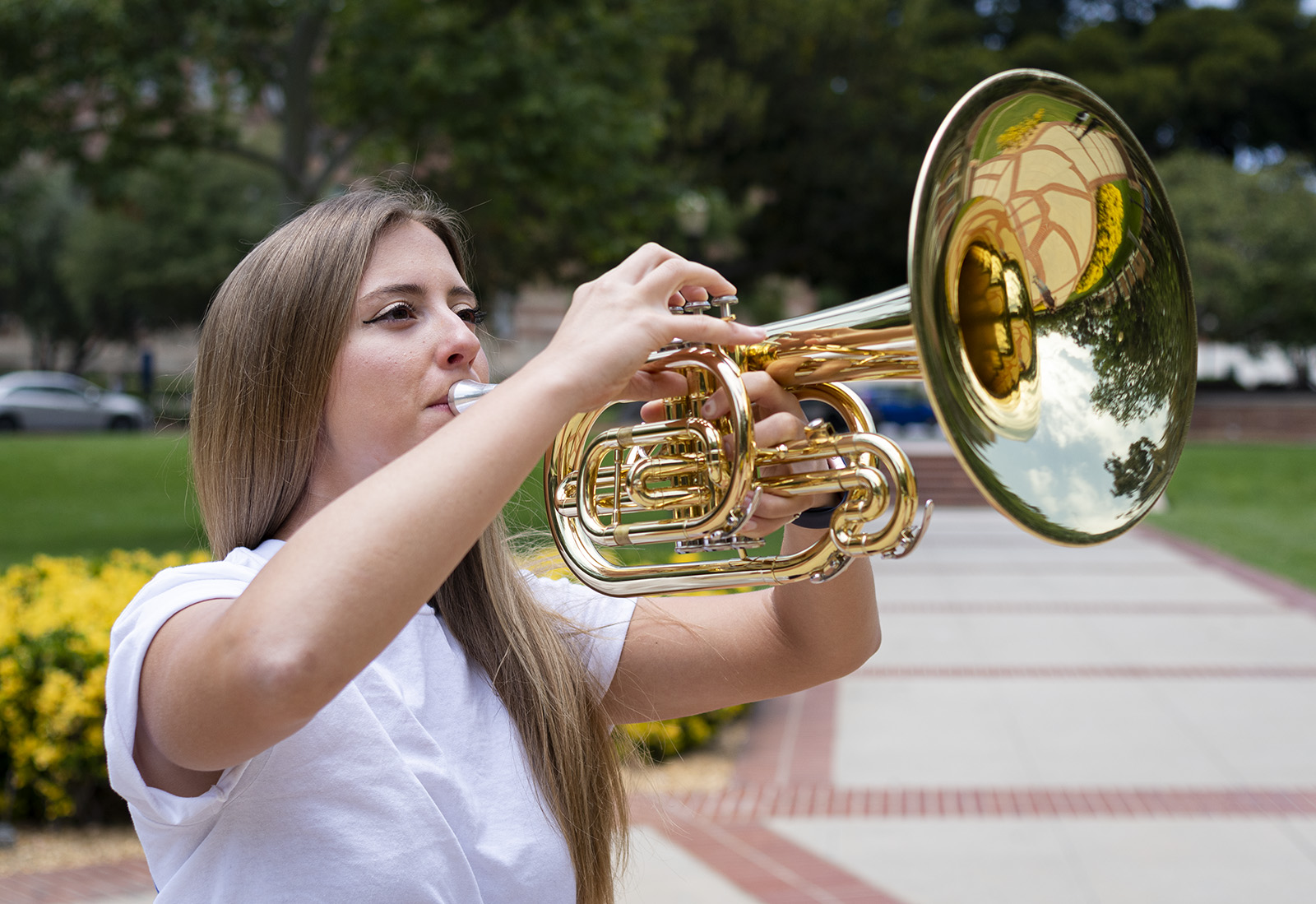 Emma Boone, a second-year music education student, will tour the United States with Blue Devils Drum and Bugle Corps in the summer. The group incorporates theatricality into its performances with choreography that implements ballet influences, she said. (Lauren Man/Daily Bruin)

The Blue Devils Drum and Bugle Corps performs the same set for over 20 competitions during the summertime, Emma Boone said.

The second-year music education student will play the mellophone for the Blue Devils Drum and Bugle Corps in the summer. Throughout May and early June, the 154-person group rehearses for 12 hours a day in Concord, California, to prepare for its United States tour starting in late June, Boone said. Competition is not the main reason the performers are part of drum corps. Instead they joined to help grow and better the Blue Devils organization, Boone said.

Drum corps heightens the intensity of a normal marching band through long training days, and the members’ hard work will culminate in its upcoming summer tour, Boone said. The sound and mobility of the mellophone makes it fit well into a marching band setting, she added, but the instrument also lends itself to the larger and more theatrical numbers the Blue Devils perform.

“Everybody comes together for one common goal – and it’s because they love performing,” Boone said.

The group’s performances will consist of both common and lesser-known songs, she said. While some of the songs on its set list have already been composed – such as Britney Spears’ “Circus” – others have been written specifically for them to fit the show’s “Ghostlight” theme. This year’s show centers around the idea of a ghostlight – a prop commonly used in theater – as a light source to ward away or attract ghosts, Boone said.

Drum corps combines both music and visual choreography in its sets, Boone said, differing from marching band, which tends to be more theatrical. Its performances draw from ballet influences, highlighting pointed toes and immaculate posture to imitate characters reflected in its performances. In their numbers, many musicians hold their instruments while dancing and performing, while others – like tuba players – will set their instruments aside to engage in the choreography as they play, Boone said.

“We’ll actually still be playing while we are dancing … because it is more impressive to play while you are moving your body and still have a good sound rather than just standing there still or marching,” Boone said.

But performers only have a brief amount of training before they carry out the complicated and dynamic choreography, said Boone’s previous drum corps instructor and alumnus Marcus Stone. In addition to this, students must contend with the intense demands of touring, such as traveling and loss of sleep. Students must be prepared to perform the elaborate numbers in a myriad situations they might encounter, he said – like playing for an unfamiliar crowd without the guaranteed support.

“We kind of just throw everything at them because our job is to create a laboratory environment where it’s OK to fail because the next day you can try again,” Stone said.

The Blue Devils’ performances typically center around an artistic vision, said Elijah Jones, a second-year music performance student, who will play tenor drums for the Blue Devils in the summer. The Blue Devils bring an artsy avant-garde style to drum corps, he said. A past performance from the Blue Devils was inspired by Edward Hopper’s painting “Nighthawks,” Jones said, in which the group brought a new perspective on where the characters in the artwork come from. The organization’s visual staff helps the performers to perfect the choreography, like bringing a unified acts during movement periods, he said.

“Our visual staff are the ones that will help us with being able to do the dance work that we have in the show and be able to help us with … making sure that we can all move together,” Jones said.

For her summer with the Blue Devils, Boone said she expects long bus rides and hot temperatures. The struggles, however, forge closer bonds between the bandmates, which is important for a cohesive performance, Boone said.

“(Performing) will get hard, but there’s times where you realize … ‘This is why I do it’ (and) ‘This is why I love this,’” Boone said. “All these other people are suffering alongside with me, (and) in the moment it’s really hard, but it totally pays off once you start performing.” 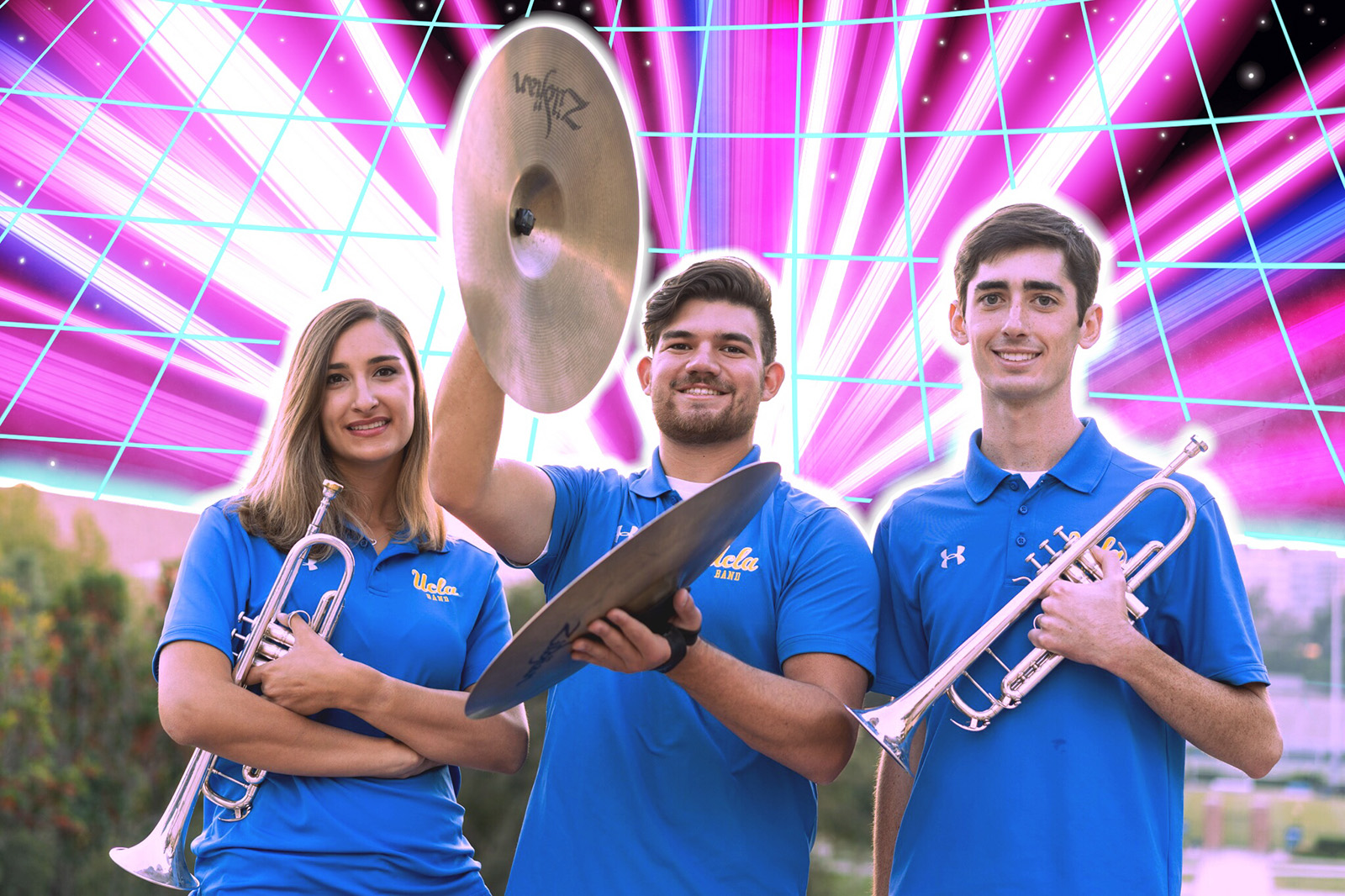 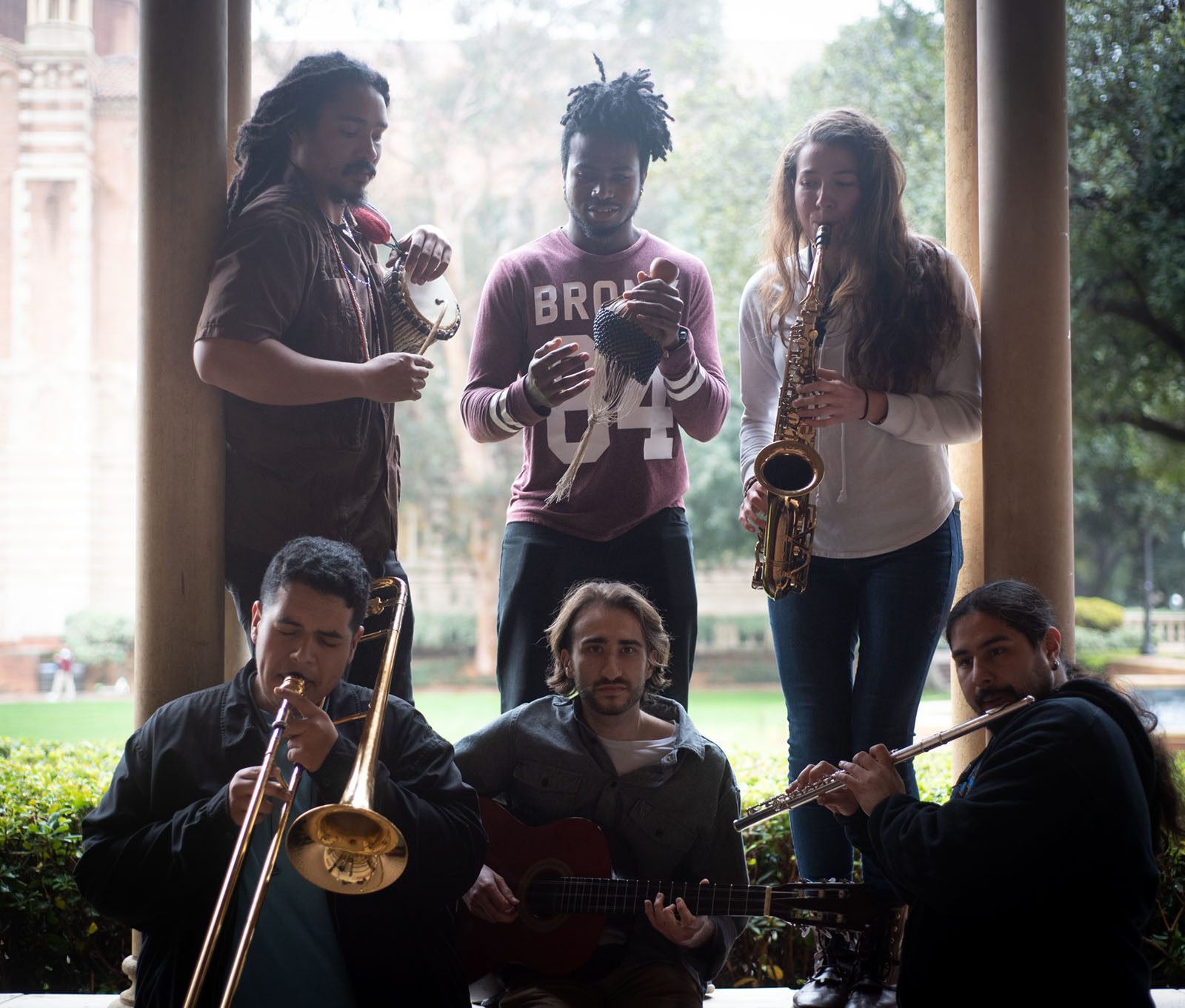