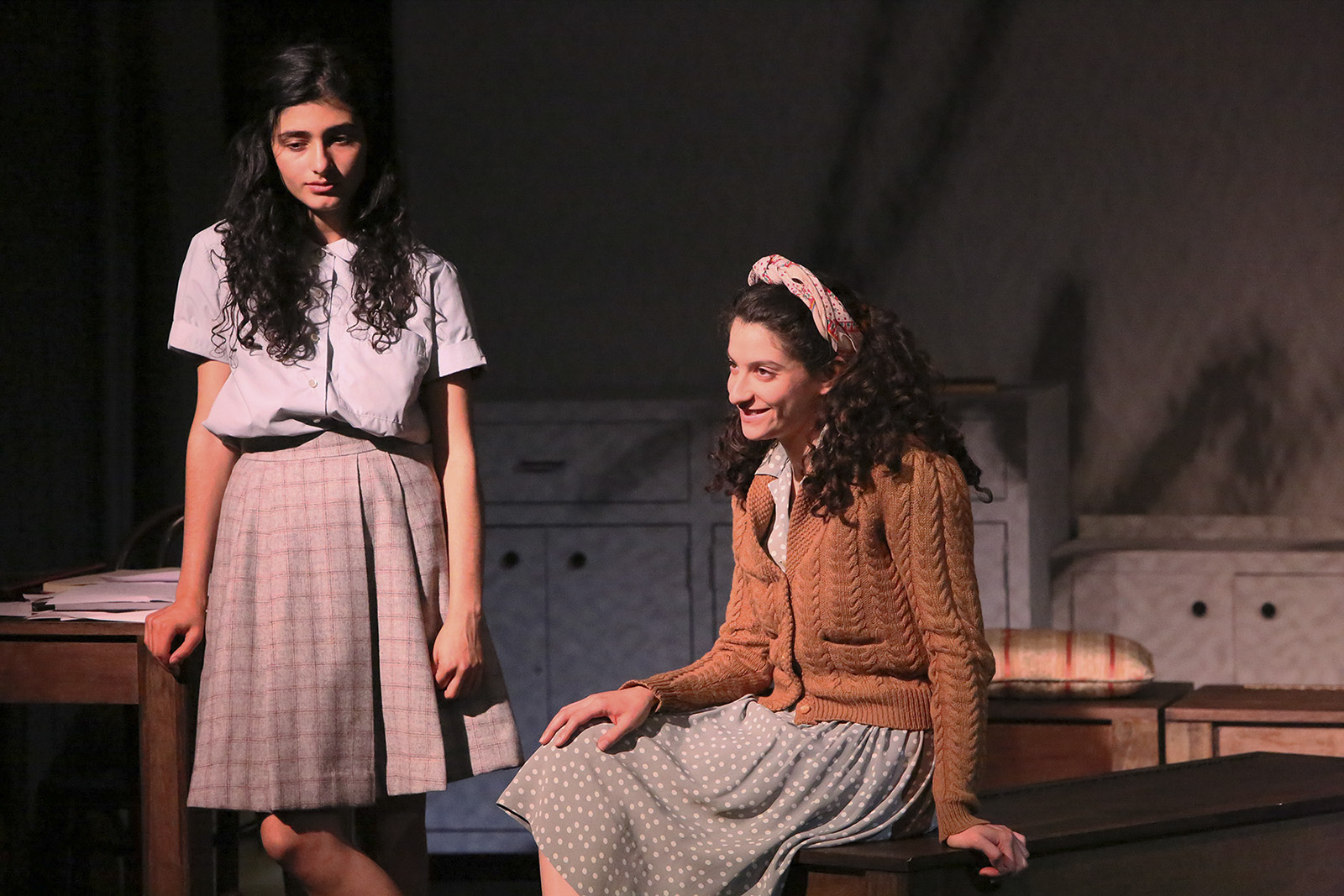 Third-year Ana Lalezarzadeh (left) stars in “Anne, A New Play” alongside alumna Marnina Schon (right) telling the hypothetical story of what life would be like for Anne Frank had she lived to see the aftermath of the Holocaust. (Courtesy of Michael Lamont)

Imagine if Anne Frank had survived the Holocaust.

“Anne, A New Play,” running from June 16-22 at the Museum of Tolerance, depicts a reality in which she does. The story begins as Anne meets with a publisher who hopes to turn her diary entries into a book, and follows her as she reflects on the years she spent in hiding with her family.

Ava Lalezarzadeh, a third-year student in the school of Theater, Film and Television who plays Anne, said the production allows audiences to view Anne’s life from a hypothetical perspective, which leaves room for individual interpretation.

In order to highlight Anne’s reflective narrative, director Eve Brandstein said they created a minimalistic backdrop for the play. She decided to depict the three-story annex that housed Anne and her family on one austere plane that lacks a traditional kitchen, sink or bed.

“Oftentimes, theater places emphasis on physical craft, but I believe in the power of stories. I wanted to strip the production of any unnecessary set designs – I wanted audiences to listen to the dialogue and leave with a memory of the story,” Brandstein said. “I didn’t want there to be room for distractions.”

Having a simplified set gives more weight and attention to the life that Anne imagined for herself, said alumna Marnina Schon, who plays Anne’s sister Margot. Minimizing set changes fosters an intimate environment between the cast and the audience, she said.

One of the cast and crew’s goals was to force audiences to leave with a greater sense of empathy and an obligation to be tolerant in their respective communities, Schon said.

“It was an interesting challenge to create a world that pushes the story forward while also leaving room for audience interpretation,” Schon said. “It’s incredible to watch because people get to fill in the details themselves.”

Lalezarzadeh said the cramped, unconventional set design also reflects how claustrophobic the actual environment was for the Frank family. The characters in the play never leave the stage, and only benches are moved to indicate location changes.

Just as characters are forced to remain confined to the tight space, the audience’s only choice is to listen to Anne’s story. The experience is raw and unfiltered because there is simply nothing to hide behind, she said.

For Lalezarzadeh, part of portraying an unreserved experience was finding truth in telling Anne’s story. As soon as she read the play’s script, she felt an immediate connection to her life, part of which she said stemmed from their shared Jewish heritage. As an Irani-Jew herself, she said persecution hits close to home.

“My soul and her soul just clicked. I felt close to her on a spiritual and personal level,” Lalezarzadeh said. “That also means I feel a great privilege and responsibility to do right by her.”

Because Anne Frank is such a well-known historical figure, it can be hard to bring a character like that back down to earth for the audience to sympathize with, Lalezarzadeh said. Oftentimes with Anne, Lalezarzadeh relied on her intuition to guide her through the process of building her characters.

When it came to decisions such as how Anne would discuss her tragic experiences during World War II, she said she followed her intuitions. Lalezarzadeh said these intentional portrayals are important in order to preserve her family’s story, as well as spotlight its relevance in the modern world.

The multicultural cast is a large part of what makes this production dynamic, as Brandstein wanted to stress that although it often feels like the Holocaust was in the distant past, something of this magnitude could still happen today.

“This is the kind of play we need right now because these atrocities – these superiority sentiments and marginalization tactics – are still relevant in contemporary life,” Brandstein said. “We never want to dismiss the horrific discrimination that the Jews faced during the Holocaust, but it was important to me that this story belong to everyone.”

Brandstein’s sentiment is shared by Schon, who said she hopes people who view the production will feel compelled to stand up against bigotry, whether it be by taking part in large-scale political activism or simply initiating a healthy dialogue with their friends.

“While it is heart-wrenching to imagine the full life Anne would have had, it is absolutely necessary,” Lalezarzadeh said. “There are two questions that I hope audience members ask themselves: ‘How can I be a more tolerant individual? And how can I prevent such a profound injustice from ever happening again?'”