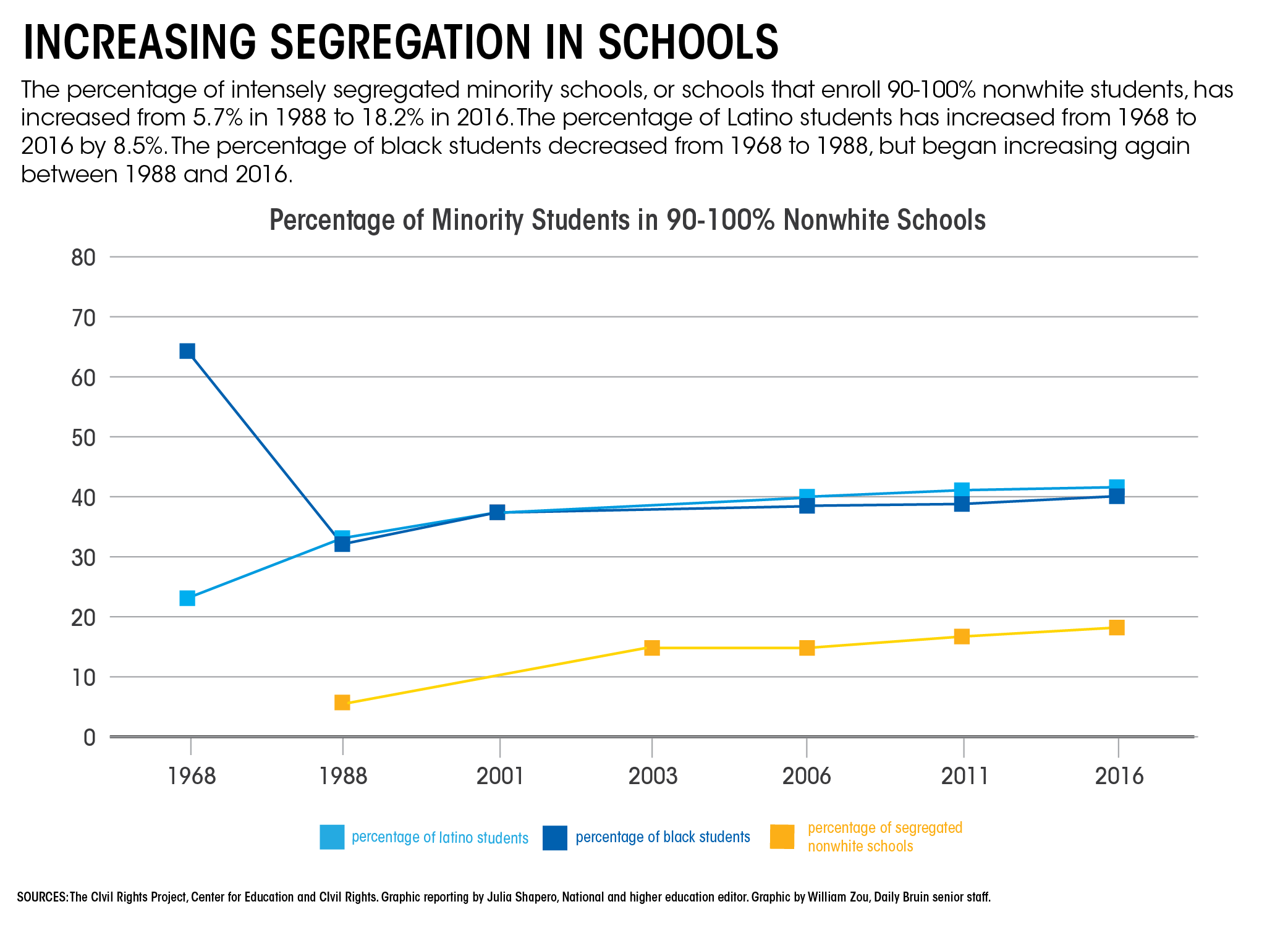 American public schools are increasingly segregated along the lines of race and income, a study found.

A report from the Civil Rights Project at UCLA and the Center for Education and Civil Rights at the Pennsylvania State University, which was published in May, found racial and economic segregation is intensifying and spreading among American public schools due to demographic changes and a stall in desegregation regulations.

The report examined segregation in American schools in observance of the 65th anniversary of the Brown vs. Board of Education Supreme Court decision, which deemed racial segregation in public schools unconstitutional.

The report found the share of intensely segregated schools more than tripled from 1988 to 2016, to the point where one out of five schools counts as intensely segregated, said Jenn Ayscue, an assistant education professor at North Carolina State University and co-author of the report.

Gary Orfield, a professor of education, law, political science and urban planning at UCLA and co-author of the report, said he thinks progress made toward desegregation since the civil rights movement has largely been erased.

“We are back to the periods of the late 1960s in terms of levels of segregation,” Orfield said. “We’ve lost all the progress we made since the time of (Martin Luther King Jr.’s) death and we are going backward steadily.”

Orfield said the Latino population in the United States has quintupled since the 1970s, from 5% to 26%, due to factors including increased immigration and decreased domestic white birth rates.

Ayscue said the study found desegregation efforts in state and federal levels have stalled because schools are no longer legally required to desegregate.

“When (school) districts are released from court-ordered desegregation, they also lose their focus on desegregation efforts, and without actively trying to maintain desegregation, schools often resegregate,” Ayscue said.

Frankenberg said to reverse segregation, she thinks school districts and governments need to work together. She said state and local governments can aid in these efforts by incentivizing cross-district enrollment and collaborations.

She added she thinks all branches of the government need to work together to create permanent housing integration efforts to avoid segregated communities. However, she said these efforts require sustained bipartisan political effort, which she believes is currently absent.

Ayscue said she thinks it is also important for school administrators and superintendents to understand whether their school assignment plans facilitate desegregation or exacerbate segregation.

Black and Latino students often experience double segregation, or segregation on the basis of both race and income, Orfield said. Schools that are doubly segregated have fewer resources and opportunities for students, he added.

About half of Asian students and about a third of white students are in the nation’s best high schools, compared to about 5% of black and Latino students, he said. This may have a drastic effect on the college admissions process, Orfield added.

Orfield said he thinks the rhetoric and actions of President Donald Trump’s administration have made people more aware of segregation.

“I think people are realizing that we are in a dangerous time as race relations in this country with the polarization and racism of the Trump era, and they are beginning to recognize that schools are one of the only places that we have to prepare people for different outcomes,” Orfield said.

Frankenberg said the different branches of government must cooperate in order to make policies that address school segregation, as they did to initially desegregated schools following the Brown decision.

“For me, that was a really important example about how widespread change can happen in a very little time period,” she said. “But that was a time in which we had all branches of the federal government working together and I think an important lesson is that we can’t do this piecemeal, it has to be a comprehensive effort.”