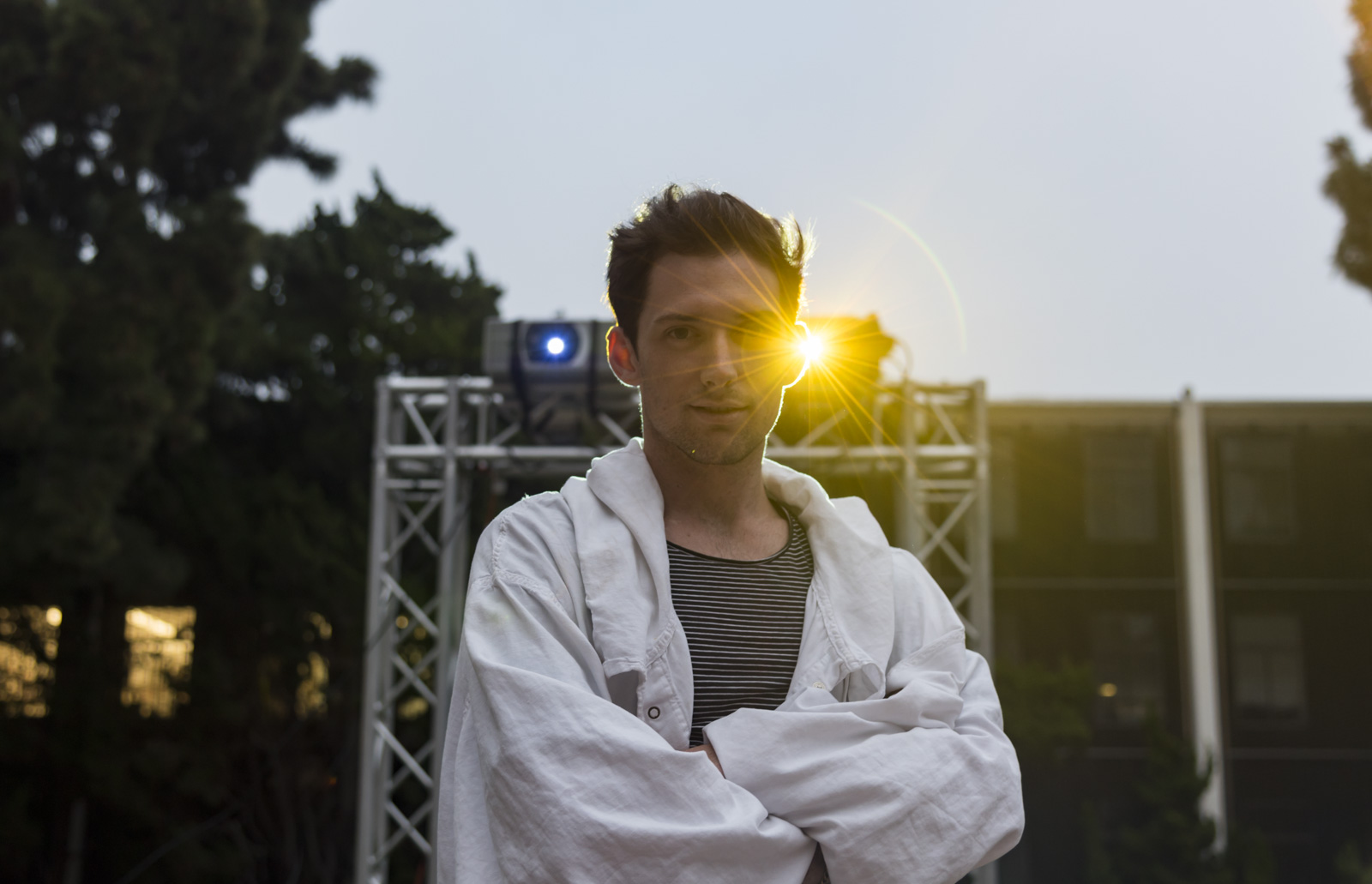 Fourth-year design media arts student Nate Mohler will project animations and shapes on the wall of the Broad Art Center as part of the “Pressed for Space” senior showcase. He said he hopes his work helps spread the idea that projection is a form of art. (Daniel Leibowitz/Daily Bruin staff)

Flashlights will uncover a pattern of animated, distorted glass on a wall of the Broad Art Center.

Using the wall of the main stairwell at the front entrance, Nate Mohler will use three projectors that reveal patterns and animations as the audience interacts with the piece. The fourth-year design media arts student’s project will be a part of the design media arts “Pressed for Space” senior showcase starting Thursday at the Broad Art Center. Inspired by the classes he’s taken on projections and their increasing use in Los Angeles, Mohler said he aims to urge people to recognize projections as an art form.

“My personal draw to projection as art is how much of a delicate experience it is,” Mohler said. “Projection art is temporary in nature, and at some point the light must go out and the building or object will go back to being itself.”

Mohler’s first projection for a school project featured student-submitted quotes on mental health and allowed people to spray-paint a wall with virtual-reality technology. Two USC students then utilized his VR spray-painting concept and projected their work onto a building. Mohler said their success led him to make his own large-scale version to project at UCLA, focusing on projections as art forms rather than just for commercial purposes.

“(The USC exhibit) paved the way, but I said I can totally do this and better – something more meaningful and something more conceptual,” Mohler said.

Mohler’s projections will utilize the entire staircase wall at the front entrance of the Broad. Participants can use 3D-printed flashlights – whose movements are tracked by VR technology – in order to reveal hidden patterns that will be projected onto the wall. Mohler coded each pattern, some of which simply augment the wall with 3D grooves and cracks, while other patterns include animated, distorted glass.

When creating the patterns, Mohler said he first considers the space. Because the Henri Matisse sculptures rest near the wall, he wanted his patterns and overall projection to contrast with the traditional design of the early 20th-century sculptures, he said. He then draws from his coding skills, ensuring the animations and patterns complement the wall yet keep the texture of the concrete visible.

“A lot of the time when I do any kind of design, I (try to) be impactful but also fun and playful and learn about it,” Mohler said. “I always pull from different parts of my own life, making that balance of art and something people can understand.”

Unlike traditional projection-mapping and video art, Mohler’s project relies on audience interaction – otherwise, the wall will remain blank, said Casey Reas, professor of Mohler’s capstone project class. The projection’s incorporation of interactive flashlights required Mohler to conduct tests, which helped him determine which patterns would work best and how smoothly people can engage with the project, Reas said.

Mohler said he highlighted audience participation because of his experiences interacting with art, including his own virtual spray-painting piece. Viewers can engage with the exhibit, evolving the piece to be more game-like; even a child could understand and take part in it, he said.

“Having this interactive element where a person can come in and alter, that is (a) really interesting relationship between the art and the person,” Mohler said. “Now they have an impact.”

The project is currently designed so participants will have individually tailored experiences when engaging with the exhibit, said Luke Mombrea, a fourth-year music student who designed the sounds paired with the projections. As participants uncover the patterns, they also listen to ambient noises that differ depending on the headphones they choose to wear, he said, allowing viewers to immerse themselves in their own atmosphere. The noises embody a nature theme and include sounds of waves and fire crackling, Mombrea said.

“One of the things special about ambient music is because there’s less rhythmic and melodic content, it leaves you a lot of space to form your impression about what the music means and what the visuals mean,” Mombrea said.

Though projection work is an evolving medium, Reas said Mohler’s project considers that architecture can be animated and forces people to think differently about space. Mohler said more and more people are using projections today and he hopes people realize that projections imbue boring, everyday objects and spaces with life and emotion.

“(Art is) not just paints on paper but also light and projection, and not just tech and something fancy like VR,” Mohler said. “I think there’s always a wow factor, but I want something more than a novice approach to technology.”