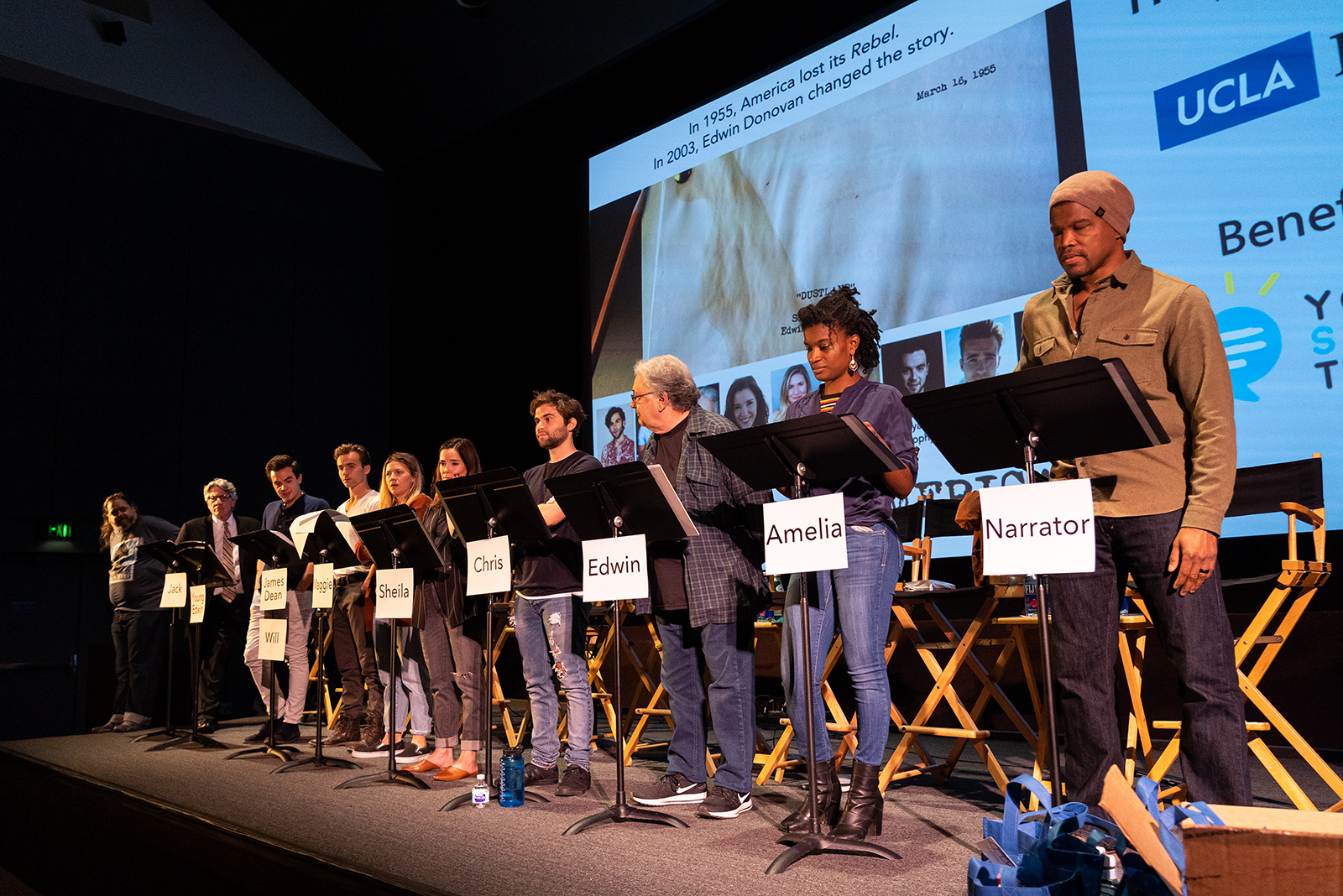 Actors gave a reading of a screenplay titled “James Dean America” during an event hosted by the UCLA Center for Health Services and Society. The story follows a producer’s assistant who attempts to sway a writer into selling his old script in order to create a film. (Elise Tsai/Daily Bruin)

James Dean might have died in 1955, but he was brought back to life this weekend.

On Saturday, the UCLA Center for Health Services and Society hosted a live table read of the screenplay “James Dean America” in collaboration with the Healing and Education through the Arts Program. Joseph Mango, the arts director and media coordinator for the HEArts Program, who wrote the script in 2012, said the table read aimed to destigmatize mental health issues by telling a story inspired by both his own personal background and the life of UCLA alumnus James Dean.

“James Dean America” follows a producer’s assistant, who, in 2003, finds an old script written by a man named Edwin. The producer’s assistant attempts to persuade him to sell the rights to the story. However, Edwin refuses, claiming that he wrote the film with his friend James Dean in mind, and he won’t allow the script to reach the big screen without the late actor involved. Dean’s character is featured in the story through constant flashbacks to Edwin’s memories of Dean and of film executive Jack Warner from 1955, the year of Dean’s death.

Nine different actors read the parts of the characters in the play, one of them being Jake Borelli, best known for his role as Dr. Levi Schmitt in “Grey’s Anatomy.” Even in his personal life, Borelli, who read for the producer’s assistant named Chris, said he is passionate about destigmatizing mental health issues.

“The first hurdle (in tackling the issue of mental health) is to get people to understand that mental health is just as important … as getting help for a physical ailment,” Borelli said.

Though Mango said he strives to include certain aspects of mental health in all his scripts, the inspiration he found from his personal background made this script even more special to him. His own life as an assistant in the 2000s film industry inspired “James Dean America,” but he did not actually write it until 2012, when he was in graduate school.

In “James Dean America,” Edwin experiences chronic depression resulting from his lackluster success in the film industry. His depression manifests itself in extreme loneliness and absence of passion as Edwin is unable to find the motivation to pursue storytelling, despite his love for it, Mango said.

Mango said he wanted to show that depression can be exceptionally lonely, which the script shows through Edwin mostly appearing in just his apartment. From there, Mango said the message began to focus on how getting help is equally as important as realistic representation of mental health. In Edwin’s case, the ability to retell stories is what gives him joy again, allowing him to find a path to better his mental health.

“It shows how the power of storytelling can provide solace for people, and an act of empathy can affect someone’s whole life,” Mango said.

Borelli was attracted to “James Dean America” because he has a passion for removing the stigmas around mental health issues. His character aids Edwin in finding his way back into storytelling, encouraging him and supporting him by listening to his life.

And for Dr. Kenneth Wells, the director and professor-in-residence of the UCLA Center for Health Services and Society, the connection between mental health and the arts is something he said is constantly relevant. Wells, who is a composer in addition to being a psychiatrist and health services researcher, said he discovered art is a medium through which people can find ways to connect with each other beyond what their mental situations might be.

“The arts create a safe space where people can gather, and in arts situations with stories – like plays – people can relate to people who go on the journey of the story,” he said.