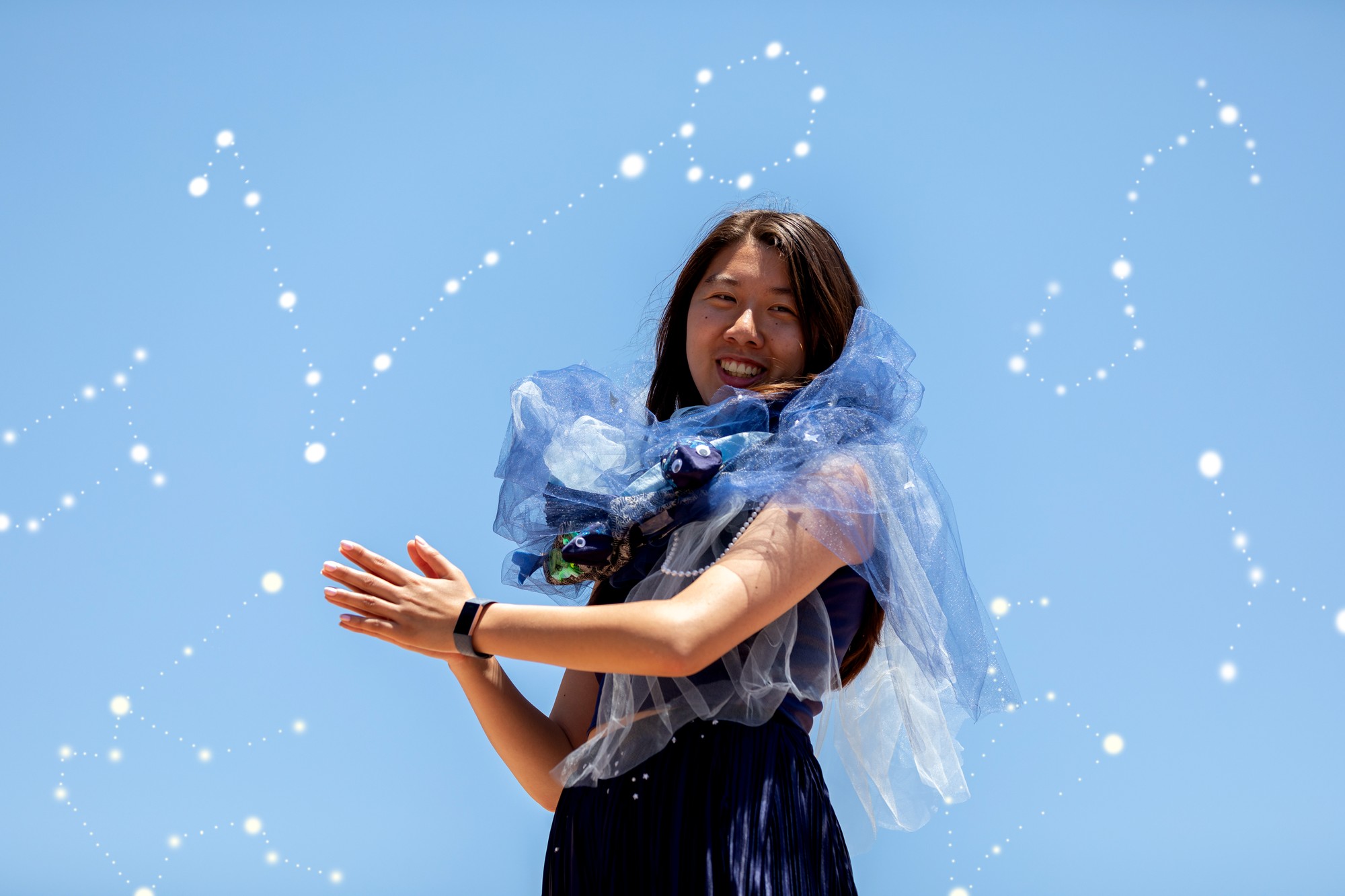 Josephine Qi, a first-year pre-economics student, designed her clothing line, “Pisces,” by combining themes of both fish and the stars. Her designs will be showcased at this year’s Fashion and Student Trends fashion show. (Photo by Tanmay Shankar/Illustration by Emily Dembinski)

Josephine Qi designed her first clothing line, “Pisces,” based on fish and stars because she found the concept amusing.

The first-year pre-economics student first developed the idea after seeing a young boy’s shirt featuring fish heads attached to human legs, and she later designed a fish-centric line in high school. She created Pisces for Thursday’s Fashion and Student Trends at UCLA runway show based on those sketches, but made them less ambitious so she could sew them and bring her designs to life, she said. Pisces also has an astrological connotation, and while Qi said she doesn’t know much about horoscopes, she named the line because of the word’s association with fish and the stars.

“I guess it’s because I was exposed to so much of that and I started to think, ‘Wow, this aesthetic is really cool,’” Qi said. “I’m just one of those people who saw (astrology) so prevalent in modern society, and I just kind of got on the bandwagon.”

When it comes to the recent astrology trend, there are two distinct groups of people: those passionate about the topic and those who don’t believe in it, said Qi’s friend Hatim Malek. The second-year political science student said Qi’s line finds a middle ground between the two sides. Because the line is inspired by astrology, Malek said the name will intrigue those who are interested in it, as well as those who aren’t.

“(Qi) finds (astrological signs) interesting but she’s nowhere near as passionate about it as, say, someone like me,” Malek said. “She was still able to find inspiration from it and use it in her fashion line … (taking) a very lighthearted approach with it which I definitely appreciate.”

Pisces includes a total of six pieces, following a general color scheme of dark and light blues, Qi said. The piece she said she is most excited about includes a giant fish head with large googly eyes worn over the shoulders, which cuts off just underneath the model’s eyes so they can still see. Qi used a dollar-store flower wreath made out of wires as the base for the fish head. The rest of the dress sparkles from glitter, tulle and stars flowing down to the floor in a long fish tail train, which is meant to create a feeling of fluidity, she said.

“You get the flowy feeling from water and how the fish moves and then you get this sort of flowy vagueness of space, and I wanted to try to connect that,” Qi said.

Qi’s roommate, Lucy Huo, a first-year undeclared engineering student and another FAST designer, said it has been interesting to see Qi incorporate unconventional materials – such as googly eyes and cotton balls – in her designs, many of which are from the dollar store. Huo said she usually sees Qi cutting material out, such as dainty stars to put on her clothes to add more visual dimensions. Creating actual clothes is more difficult than sketching them, she said, because it’s important to keep in mind the dimensions and curves of an actual body as opposed to a flat, 2D one.

“It has been interesting figuring out how to sew and make clothes and go from drawings to actual 3D objects,” Huo said. “It’s easy to draw crazy dresses and stuff but actually making it is a lot tougher because you would need structuring.”

Many of Qi’s pieces are crafted to maintain a certain shape, such as a fish head emerging from the torso with a fish body stemming from the back. To create a sturdy silhouette, Qi said she bent wire and aluminum which she then covered with polyester fabric along with silver, white and light-blue glitter. In other designs, she also incorporated koi fish-patterned fabric, which was used to create a skirt, and bought fish-patterned shower curtains from Target, which were repurposed for a jacket and a fish-tail piece. For another design, Qi created a cloud vest that hangs off the neck and shoulders using pillow stuffing and string lights to resemble a galaxy.

“I didn’t realize having my ideas would be unfeasible with the time, money and materials that I had, so I had to make it up as I went along,” Qi said.

Qi said she sometimes wishes she took a more serious direction with her line and respects designers who are passionate about what they do. But because fashion designing is more of a hobby for her than anything else, Qi said she mainly aims to enjoy the designing process, which emerges from adding small details – like googly eyes.

“I want to enjoy what I do, and my sense of humor is so childish that it won’t be fun unless what I think I’m doing is funny,” Qi said. “I’m doing this, one, to learn about fashion, and two, to have fun.”