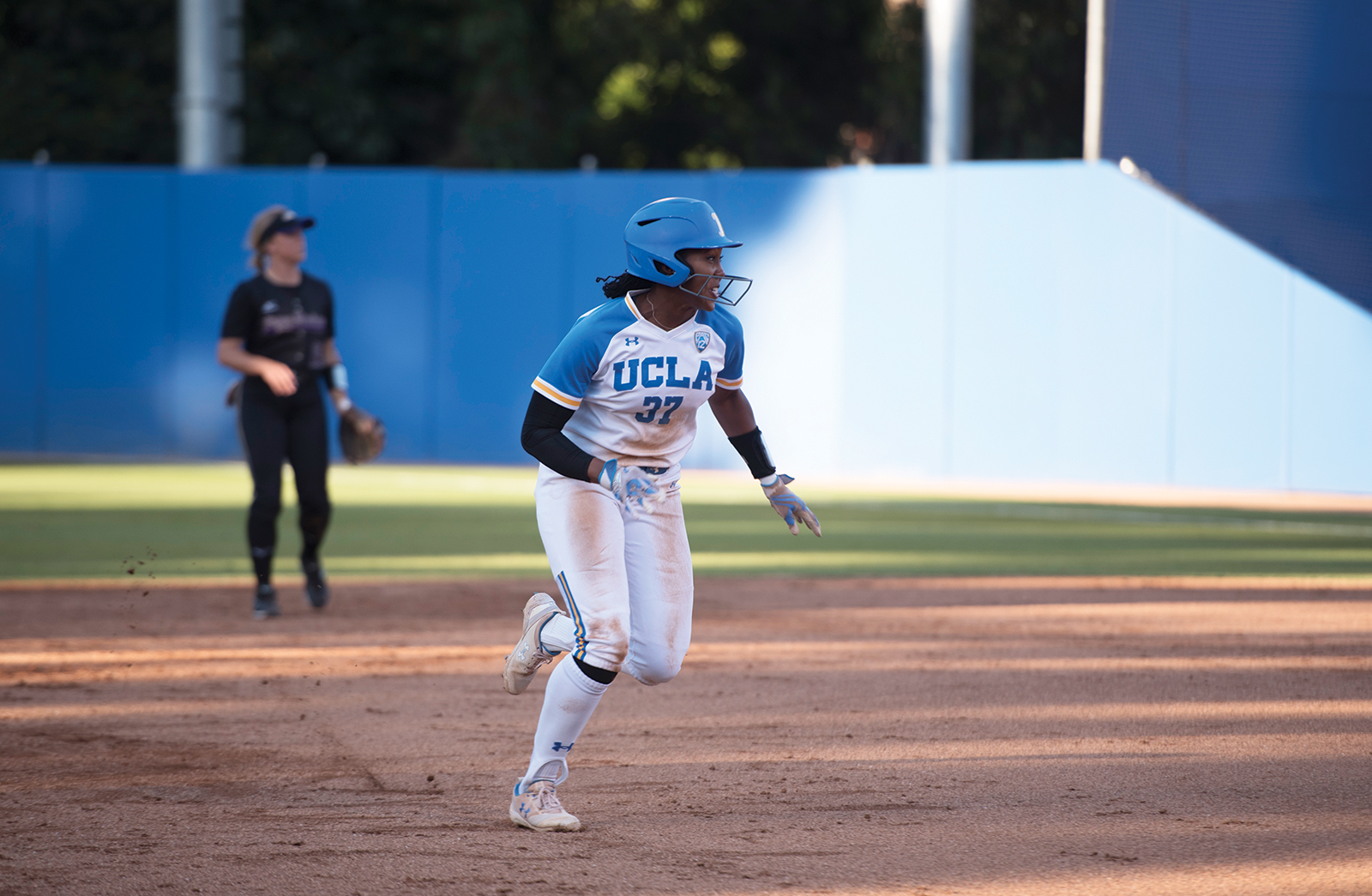 Sophomore utility Kinsley Washington doubled and scored twice in No. 2 seed UCLA softball’s win over James Madison. The Bruins will have a chance to advance to the Women’s College World Series with a win tomorrow. (Ashley Kenney/Daily Bruin)

The Bruins need just one more win to advance to the Women’s College World Series.

The Bruins fell behind early after redshirt junior pitcher Rachel Garcia gave up a solo home run to the second batter she faced in the game.

“They threw a punch first, and the way that our team responded is probably what makes me most proud,” said coach Kelly Inouye-Perez. “We threw a punch back, and we were ready to play, and I think that set a tone of what we’ve been all year.”

Sophomore utility Kinsley Washington’s double down the line started a rally for UCLA in the third inning. Washington advanced to third on a wild pitch and scored when sophomore shortstop Briana Perez reached on a fielding error by the Dukes’ first baseman.

“I think since our team was really going for that one run that we were behind by, it was really important for me to do anything I could to get on base … and then just let my speed and let my teammates move me over,” Washington said.

Garcia gave herself some insurance runs two batters later, driving a three-run home run to right-center to give UCLA a 4-1 lead.

Washington scored again in the fourth inning on a bases-loaded walk, followed by a single from Garcia that scored one more to put UCLA up 6-1.

Washington doubled and walked in the game, scoring two runs and starting the rallies in both the third and fourth. Inouye-Perez said that having productive hitters like Washington batting all the way in the eighth spot in the batting order shows how deep the team is, and is the key to the Bruins’ success this season.

“This is what makes UCLA softball so successful. (Washington) can go anywhere in the country, and she’s in the three-spot,” Inouye-Perez said. “She can fill the role of doing whatever it takes for this team, she has speed, she has power, she has short game.”

In a game that featured two of the three candidates for USA Softball Collegiate Player of the Year – Garcia and JMU pitcher Megan Good – Garcia emerged with the complete game win. Garcia gave up only one hit after the first inning, striking out 12. On the other side, Good took the loss after giving up six runs in 3 1/3 innings, two earned.

Garcia also edged out Good at the plate, going 2-for-3 with a home run and four RBIs while Good finished the game 0-for-3 with three strikeouts.

The Bruins will face the Dukes Saturday at 5 p.m. at Easton Stadium, with a chance to win the series and move on to the Women’s College World Series next week.