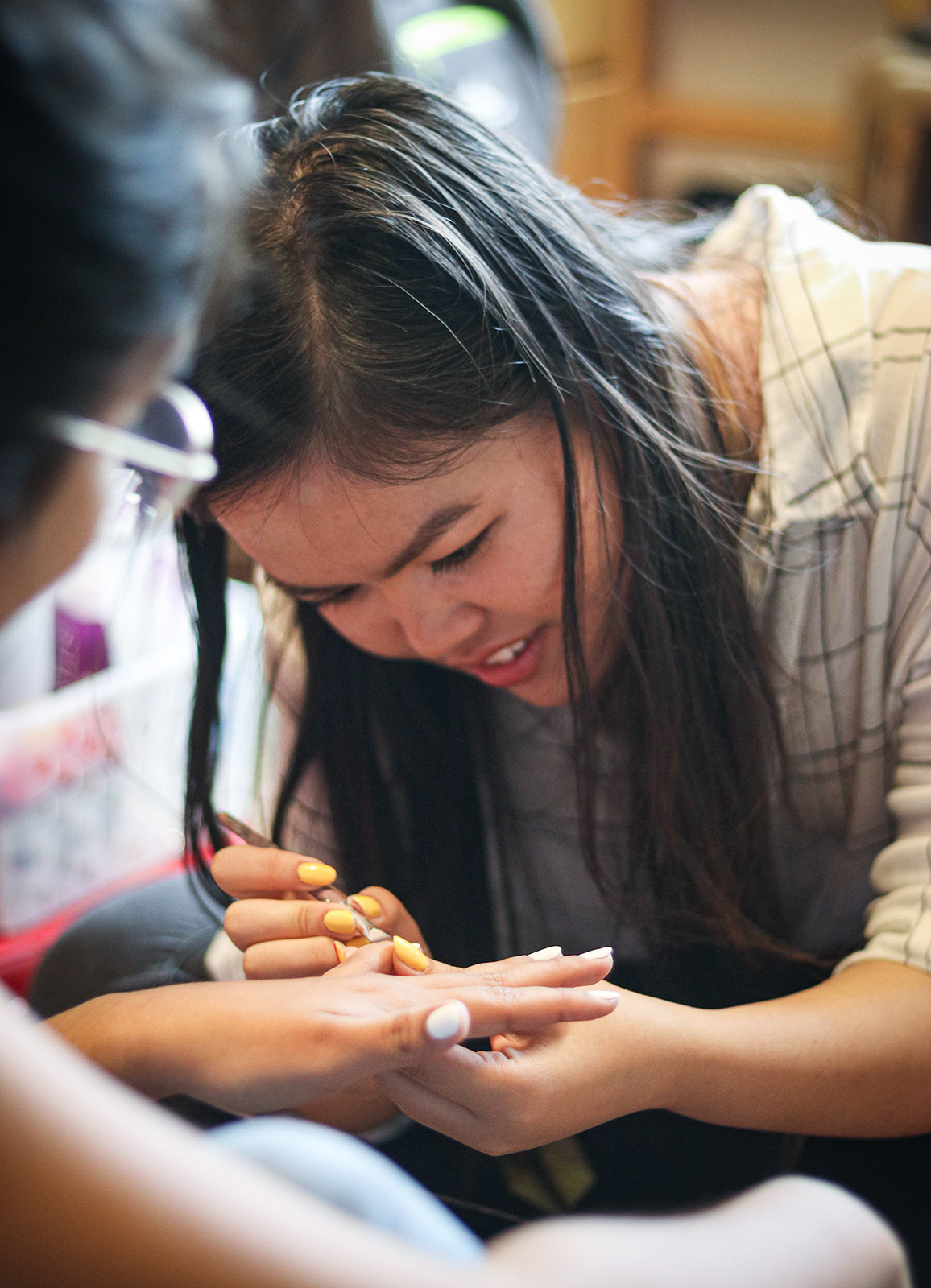 Brittany Nguyen wanted to stop biting her nails – so she started painting them.

The second-year sociology student taught herself nail art through YouTube videos at 14 years old. Toward the end of her freshman year of college, Nguyen wasn’t involved in many extracurricular activities; she took to nail art, posting pictures of her work on social media platforms and eventually seeking student clientele. Nguyen said she improvises her work based on each client’s nail preferences, their previous nail appointments with her, their nail length and the clothes they wear. But since she is still fairly new to the nail art field, Nguyen said there is room for improvement.

“It can be pretty daunting when you see some super cool acrylic designs and just think ‘I can’t do that,'” Nguyen said. “But then once you find the time and space to do so, it just kind of flows right out of you.”

While she mostly uses Instagram as the platform to showcase her nail art, Nguyen said she started growing her clientele base through Facebook. Posting about her services on Facebook groups – like UCLA Free & For Sale – and hosting giveaways and service deals helped her gain followers and customers, she said. Nguyen said she typically has seven to 12 clients per week.

“There’s been so many new talented people on the rise (on social media) that a lot of times … it’s hard to create something that people haven’t seen before,” Nguyen said. “It really depends on how much you engage with the people who actually like you for what you do.”

Her most popular requests from students are white or nude gel nails, but some students like to experiment with neon or bright colors. One client requested for 10 fingers be painted different colors for a music festival, though more common among the bolder requests are stripes and polka dots, she said.

Students sometimes base their requests on designs they’ve found on her Instagram page, she said. Her feed mainly features photos of her clients’ nails, she said, most of which bear simple work, like a solid color in gel polish.

Nguyen said while some nail polish formulas and colors are easy to work with, others require more of an effort. Nguyen said she has about 75 bottles of nail polish in her dorm room for her manicures and pedicures. With her collection of polishes and tools, Nguyen said she starts off her services by buffing and shaping the customer’s nails before painting them.

Marlene Quintanilla Flores, a first-year pre-human biology and society student, said she first learned about Nguyen’s services through her posts on Facebook, on the UCLA Class of 2022 – Official Group. Quintanilla Flores said she prefers her nails long with a simple and plain polish color with no additional design – which is the look she received from Nguyen.

Unlike the occasionally rushed nail salons, Quintanilla Flores said Nguyen pays attention to the small details with her craft – like making sure the edges of her nails are covered in polish. Visiting Nguyen was also less expensive than visiting a professional nail salon, she said. Nguyen said she charges around $12 for a gel manicure. Quintanilla Flores said she thinks students running services out of a dorm can better accommodate students’ needs and schedules.

“At a school like UCLA, … things are not really easily accessible or things are expensive in the area,” Quintanilla Flores said. “(Student-run) businesses are great because they make a little extra cash and then we get what we want without the need of having to go far or pay an extensive amount of money.”

Nguyen said she considers herself a perfectionist and takes her time with every client. First-year pre-human biology and society student Riya Shah said she also found out about Nguyen’s work through posts on Facebook and has had two appointments in Nguyen’s dorm. Shah said she likes how Nguyen’s services are on the Hill and how she can get manicures and pedicures without traveling far. For her first appointment with Nguyen, Shah said she asked for baby pink nail polish on her fingertnails, and returned after liking her first design. For her second appointment, Shah said she got a white-colored nail polish on her fingernails and a baby pink polish for her toes.

Nguyen said she likes to control and be flexible with her work hours by booking appointments around her classes and study time. Having grown from her dorm into her floor lounge, Nguyen said she enjoys engaging in personal conversations with her customers about family or what happened during class that day.

“I generally do enjoy getting to know my clients (and) I look forward to having new appointments,” Nguyen said. “It’s just … really cool being able to manage myself, my own hours and getting to bring people into my life.”