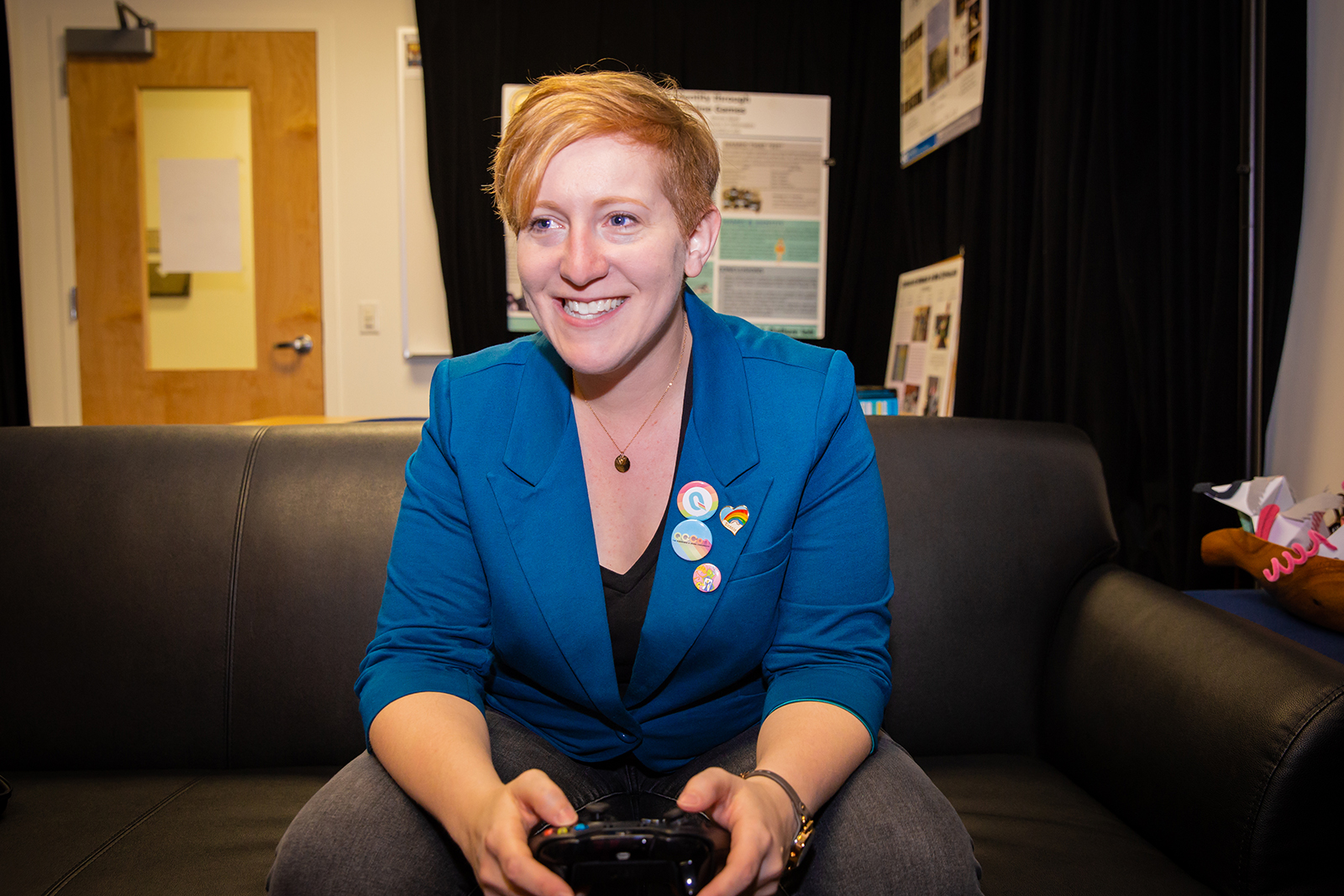 Bonnie Ruberg, an assistant professor in the department of informatics at UC Irvine, believes video games can be interpreted through a queer lens, even if they weren’t explicitly designed to have queer themes. Ruberg gave a talk May 1 at UCLA. (Courtesy of Han Parker/UCI)

Bonnie Ruberg sees parallels to their queer experiences in video games like “Octodad.”

Within the game, players fulfill the role of an octopus pretending to be a human father, which Ruberg said resonated with their own experience as a nonbinary person.

Ruberg, an assistant professor in the department of informatics at UC Irvine, discussed how a queer person’s experiences can affect their interpretation of video games during a lecture at the UCLA Game Lab on May 1. Finding queer content in a game is similar to analyzing books or films, they said, where the content is considered through various interpretive lenses. Such analysis can push people to consider messages that could be seen as nontraditional, even if the games are not considered as being explicitly queer, Ruberg said.

“It’s a way of reclaiming video games because games culture can be really exclusionary, really homophobic and transphobic,” Ruberg said. “It’s a way of … saying, ‘You know what, even though you’ve made all these queer people feel unwelcome, this medium (of video games) belongs to us too.'”

The concept of “queer play” helps Ruberg discover the queerness within a game. When a gamer plays a game in ways not intended by the designer, they can incorporate their own identity into the narrative, Ruberg said.

A game called “Realistic Kissing Simulator,” for instance, could theoretically be seen as something that resists gender and sexuality norms through the freedom in its design, as no genders are explicitly stated, they said. The two-player simulator is a lighthearted take on kissing and lacks a clear winner, which Ruberg said deemphasizes the idea that sex is something one should try to be “the best” at. The game evades heteronormative ideas about gender and relationships because any two people can play together, they said.

Ruberg co-founded the Queerness and Games Conference, which fosters conversations on how to apply LGBTQ gaming concepts to the broader queer community, they said.

“To look at the ways (video games) relate to queer experience, or queer desire, even when (the games) don’t seem to have any queer people in them, is kind of the specialty of my research,” Ruberg said. “I’m finding queerness in games in ways that are still really meaningful even if there aren’t any LGBT people represented in these games.”

Testing the limits through speedruns can also open up new symbolic perspectives, said Christina Curlee, a graduate student and game designer who attended Ruberg’s talk. Speedrunning is the process of people exploiting self-discovered glitches within a game, such as button combinations that make the game jump forward in time, to complete it as fast as possible. Playing the game against the designer’s intentions can parallel the idea of resisting common societal narratives that tend to exclude queer people, Curlee said. A player could also implement their own code into a game to make it personalized based on their own preferred appearance, Curlee said.

“When you play games wrong, you’re literally not playing … the rules that were set up for the system and going instead in what feels right to you for what you want to do,” Curlee said.

Curlee uses software engines originally created to make violent video games, but instead uses them to change aspects of the original coding. Glitch colors, like pinks and purples that flash on the screen when the game is “broken,” make the game more colorful than it would have been originally and can provide an outlet for self-expression, Curlee said.

When video games allow people to pick their own characters, the gamer is also given a space to express their identity inside a fictional game. Choosing a character’s gender and outfits, for example, gives the player control of their in-game appearance, Curlee said.

“You can explore identities and explore things about yourself in games that you can’t in the real world, but you also can’t in something like a movie,” Curlee said. “It’s input in a very one-to-one, individual experience between you and the game.”

The characters that players are forced to use can also represent the LGBTQ community in a roundabout way, said alumna Sofia Staab-Gulbenkian, who helps run the UCLA Game Lab. In “Super Mario Bros.,” the lead male character is in love with a princess. Staab-Gulbenkian said she had to play the straight cis male character and the game encouraged the idea of her having a relationship with the princess. Thinking of herself – rather than just Mario – as in a romantic relationship with the princess helped create a personalized queer storyline, she said.

“I’m not a man, so I’ve never played games from a male point of view. So to me, (video games) always had an element of pretending to be somebody that I’m not,” Staab-Gulbenkian said. “The idea that your identity is fluid while you’re playing a game is not something that’s unfamiliar to me.”

However, finding queer interpretations of video games is not a replacement for LGBTQ representation, Ruberg said. It’s important for large gaming companies to reflect their queer audiences’ experiences, they said. However, supporting people who are queer and make small experimental games also has a profound positive impact on the community because it gives them more recognition in the gaming world that often lacks queer representation, Ruberg said.

“At some point (queer video game interpretation) starts to have an effect where people feel like they legitimately belong more,” Ruberg said. “And if those people feel that way, then they can go out and make change in what we see in games themselves.”