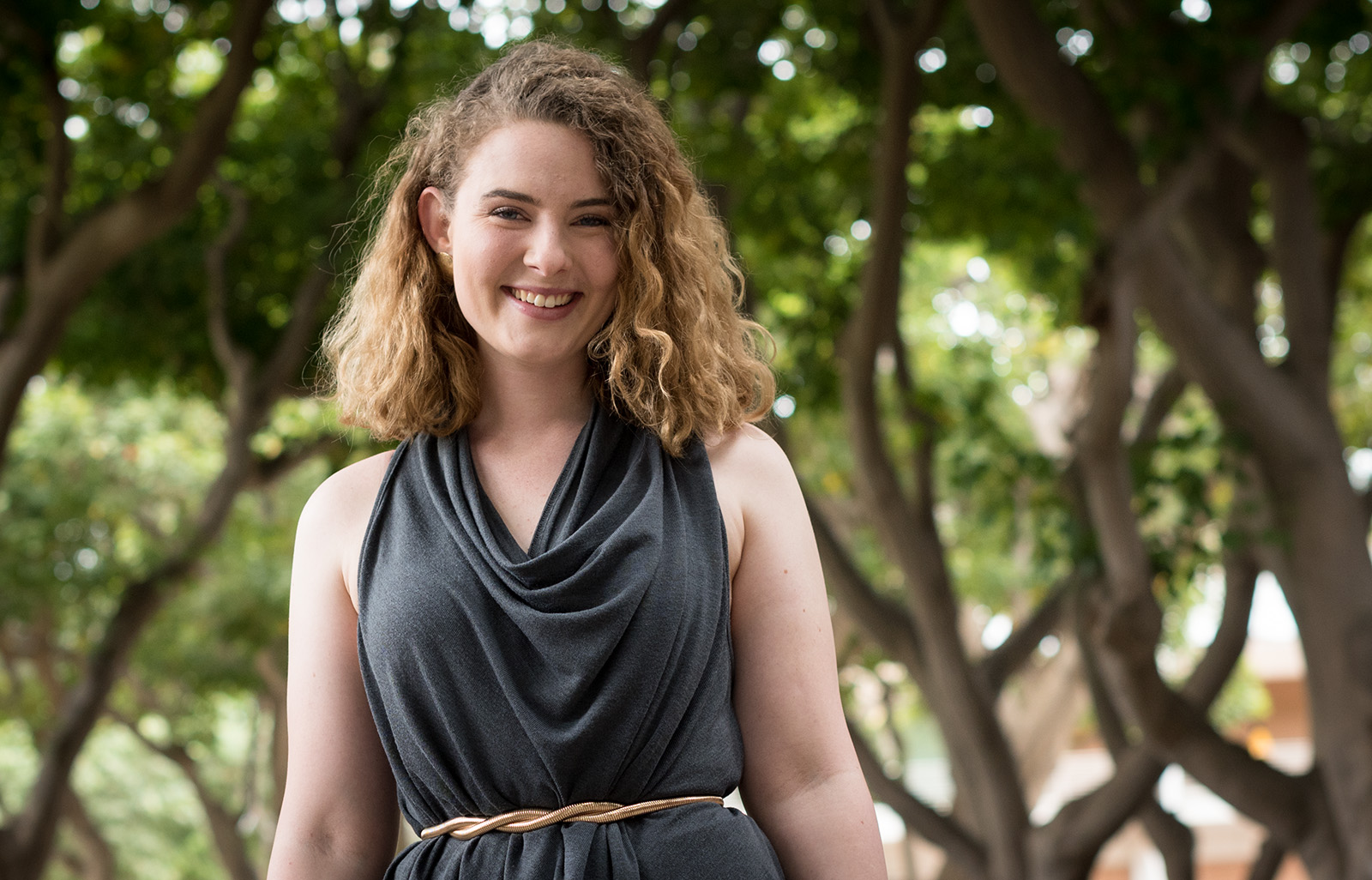 Graduate acting student Chelsea Giles wanted to translate the magic she has experienced in her own queer relationships, so she directed the short film “Grapefruit.” The absurdist romantic comedy follows two women brought together by an unnamed narrator.
(Daniel Leibowitz/Daily Bruin staff)

“Grapefruit,” her absurdist comedy, attempts to subvert typical romantic comedy tropes. Giles said her aim was to portray a romance that felt sweet, charming and hopeful, but also reflects her experience as a queer woman. When it comes to queer dating, she said there’s a magical quality she feels that she wanted to translate into the film.

“There’s a lot of joy and cheekiness that you can fall in love with a woman when you are a woman,” Giles said. “The people who live these romances don’t necessarily get to feel complete in the typical script.”

Giles approached alumna Zoe Yale to write the screenplay for “Grapefruit,” which Yale said came from the idea of flipping a common rom-com trope on its head: the meet cute. The trope tends to involve the two leads meeting in an unlikely or zany fashion, but Yale said she was interested in doing one that felt modern, fresh and personal. While most rom-coms depict their leads as exceptional, Yale said she wanted two very ordinary people to meet in a strange way.

“I wanted to capture the life of our main character without feeling like we were fetishizing or justifying her,” Yale said. “I didn’t want to start off as, ‘She’s a babe and she also happens to read.'”

Giles said most queer women meet on dating apps, but rather than tell a commonplace story, Yale’s script has the two meet through an introduction by a mutual friend at a location most banal: a park bench. The location belies a simplicity that’s made complex by Yale’s tonal choice.

The story utilizes an omnipotent narrator who creates the two leads, Rhea and Alex, and observes them from an ethereal distance, asking questions both about them and of them. Rather than the cheerful, beguiling characteristics common of leads in rom-com films, Yale said the narrator of “Grapefruit” examines Rhea’s idiosyncrasies. They comment on what she usually smells like – coconut, illustrated by a quick cut to a jar of coconut oil – and the sounds she makes – a conglomeration of laughs, coughs and other bodily noises. Yale said she wanted to capture Rhea’s character as a whole person, not as a romantic ideal.

“Those are the sounds that she makes in a day, that’s her scent and how it changes,” Yale said. “Sometimes they’re great and glamorous and sometimes she’s just a sweaty mess.”

When the narrator asks aloud what it’s like to be around Rhea, they direct the other lead, Alex, into meeting her. Their park bench encounter would look mundane in any other film, but the narrator playing puppet master is odd enough to make the audience pay attention, Yale said. The manner in which dialogue is employed, with quick cuts to illustrate the imagery of what each character is expressing, is not something one would typically see in an archetypal rom-com.

“For me, it was taking these great romantic tropes that make movies beautiful, but making them resonate more with me and my queer experiences,” Yale said.

The film was produced by Violent Pink Productions, a production collective that focuses on intersectional feminist filmmaking. It was founded by Yale with fellow alumnae Maggie Jorgenson and Lauren Henning, who respectively serve as the supervising producer and executive producer of “Grapefruit.” The aim in establishing Violent Pink Productions, Jorgenson said, was to move the industry forward by creating a platform for work of queer women filmmakers. Giles said after asking Yale to write the film, it only made sense that Violent Pink Productions should be the company to produce it.

“(Giles) came to us and asked if we wouldn’t mind coming aboard the project,” Jorgenson said. “We’re very much into … producing and building platforms (for queer people) and helping people put forward their ideas.”

Giles said Yale’s original script was titled “A Fig,” and the central fruit that was to be shared between Alex and Rhea was the titular fig. Yale said the original use of the fig was meant as a cheeky symbolic representation of female anatomy, but they were out of season, so they utilized grapefruits instead.

“I just wanted to show those fragments of life that say, “‘There’s a little magic in romance that we get to experience and others don’t,'” Giles said.

Comparing the tone of the short film to contemporary queer cinema and television, Giles said her goal was closer to “Wynonna Earp” rather than “Blue is the Warmest Color.” She said she wanted to create a queer film that was far more representative of a lighthearted romance between two women, rather than the emblematic tale of two women who must endure strife due to their illicit relationship.

“Queer women are usually in period pieces, which implies a level of subtlety and modesty,” Giles said. “(Those stories) usually end up being about the suffering and the struggle.”