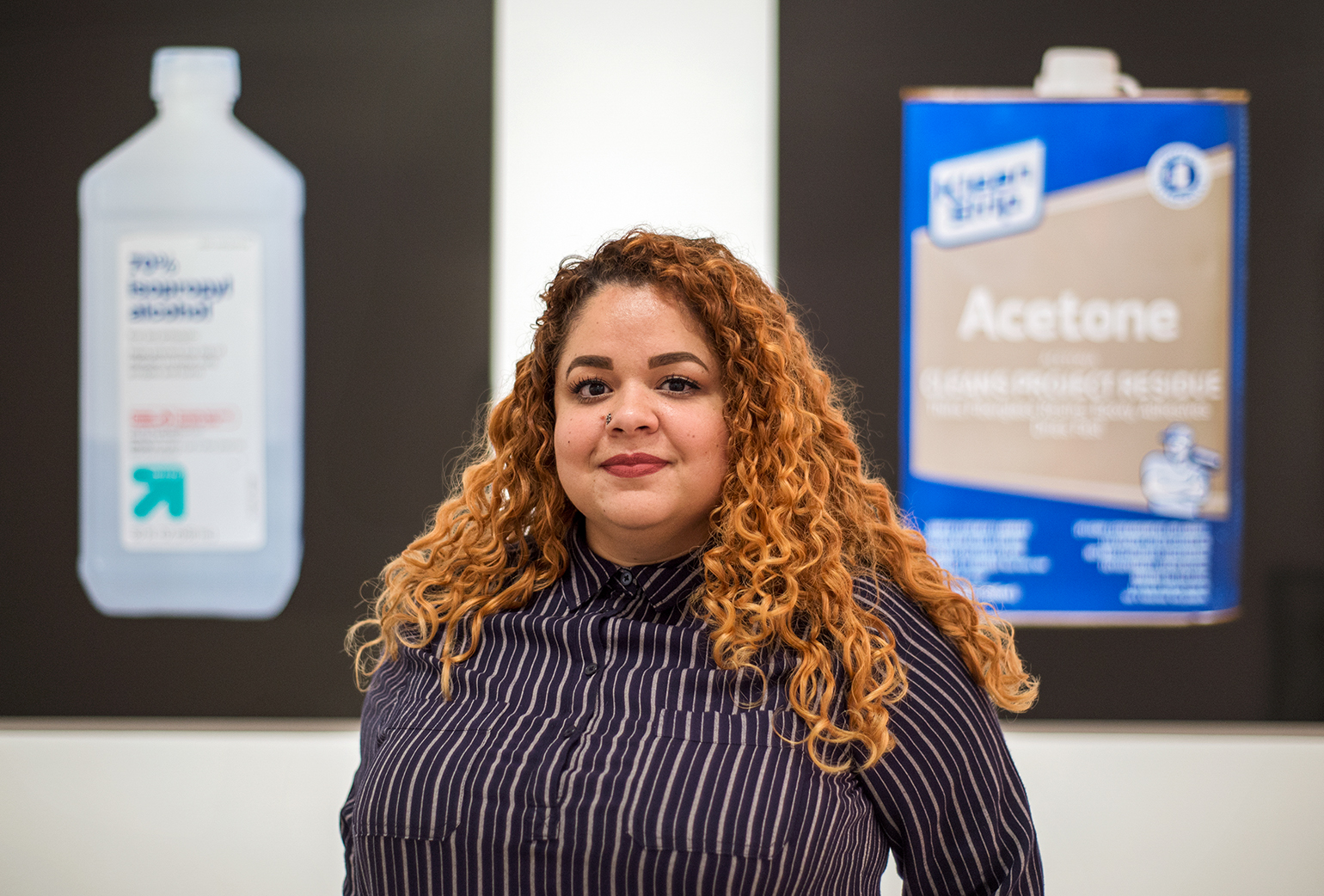 Alumna Aydinaneth Ortiz created a series called “Ingredients,” in which she photographed common objects used in the synthesis of crystal meth. She said the dangers of drug addiction affect her own life, as her brother self-medicates his schizophrenia. (Courtesy of Juan Manuel Valenzuela)

Ingredients commonly used in crystal methamphetamine can be found in your everyday household products.

Readily available commodities like isopropyl alcohol, brake fluid and battery cleaner are sometimes used in the synthesis of the drug, said Aydinaneth Ortiz. The UCLA alumna photographed a number of these products for a series titled “Ingredients.” Three photos from the set of eight were on display at the University Art Museum at California State University, Long Beach from January 28 until April 14 as part of the exhibit titled “Call and Response, When We Say … You Say.” With “Ingredients,” Ortiz said she wants to show viewers the dangers of crystal meth, since it is an issue that has impacted her own life and continues to affect many people.

“I noticed that crystal meth or drug abuse are not really talked about in the art world so I wanted to take this opportunity to highlight this problem,” Ortiz said. “I was able to see how big this problem is besides in my own home.”

Ortiz said drug addiction has influenced her own life because her brother has schizophrenia and self-medicates with crystal meth. In her series, the eight photos each highlight a different product or ingredient, and the three showcased in the museum exhibit display acetone, sinus medication and alcohol. While taking the photos, Ortiz said she placed the products against a black background – almost as if she was taking a portrait – to draw attention to the ingredient. She said she hoped to distinguish her work from typical commercial photography, in which items are usually placed atop lighter backgrounds.

Ortiz then magnified the photos, producing them as large graphic prints of 40-by 60-inch dimensions. Since they are poster-sized, she said the photos emphasize some of the warning signs and labels on the items’ packaging. Phrases like “removes corrosion” and “flammable” appear on the containers, she said, sometimes accentuated using bold text or red colors. When viewers see such labels accompanying common crystal meth ingredients, Ortiz said they might be less likely to want to consume the drug.

“It can be in conversation of what people are ingesting and putting in their bodies, and how harmful these things are, so they’re larger than life so people can actually read their texts,” she said. “You will see warning signs on a lot of these ingredients or products – they’re warning people to be careful, to have caution.”

When scouring for products, Ortiz said she bought some for the project but also included items that have already been used, like brake fluid she borrowed from her dad. She said some product containers had tears and rust on them, which matched the series’ darker theme.

Ines Schaber, Ortiz’s mentor at California Institute of the Arts when she was pursuing her Master of Fine Arts, said she was not aware of the everyday ingredients that can be found in drugs prior to seeing Ortiz’s work. Schaber said “Ingredients” provides people with a wide description of drugs and ways they are made. She said Ortiz poses a complex question, positing that there should be more social and community care for those facing drug use and addiction.

Ortiz said she tries to spark conversations about issues that are not always discussed in the art world, one of them being drug addiction. She previously made a photography book that dealt with her brother’s schizophrenia and her youngest sibling’s death, and after sharing her story, found that others were willing to open up to her too, she said. She started to focus on works that were personally meaningful for her but also relevant for many people after learning more about other experiences.

“In her artist statement, if you read the wall, there’s like a kind of an ‘aha!’ moment … to ask what are these things the ingredients to? Once they find out, to have that kind of epiphany … is how I feel art should function as opposed to being a didactic,” he said. “It’s not a textbook, it’s not a math problem, it’s not scientific – it’s about allegory and storytelling.”

Though her brother has seen her work, Ortiz said it has not changed his behavior. Regardless, she said she hopes “Ingredients” will help others, like family members who might know someone with drug addiction. Viewers might become more aware of the issue after viewing her work or will take it as a warning sign to prevent people from falling into the dangers of such a dangerous drug, she said.

“I show the research that I’ve done with these issues that have happened or problems that have happened with my life,” Ortiz said. “I do wish that I can maybe start that conversation where people want something different in their life and want change.”