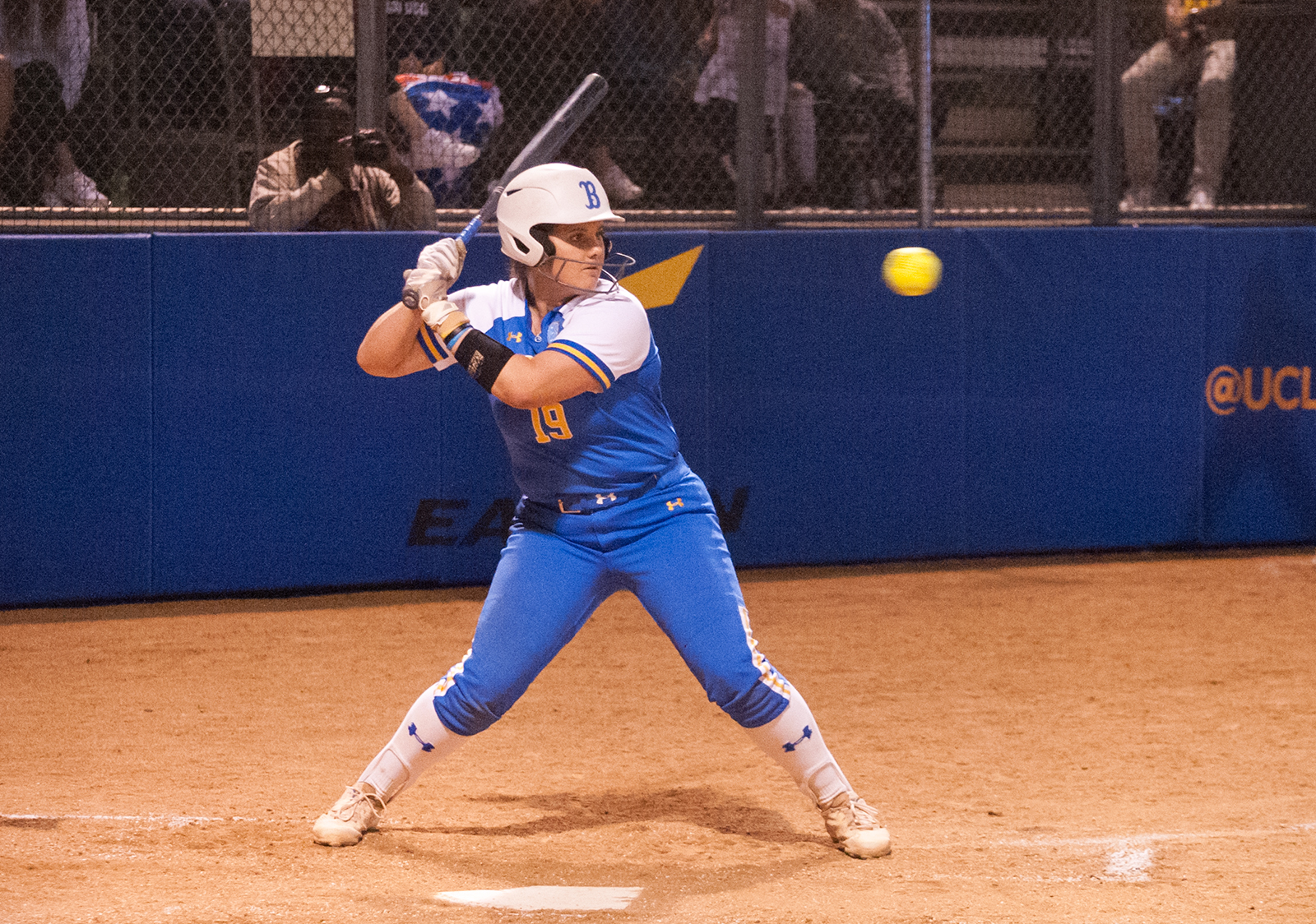 Freshman utility Colleen Sullivan hit her second home run of the year in UCLA softball’s game against Oregon State on Friday. Sullivan is hitting .259 on the year. (Alice Naland/Daily Bruin)

The Bruins are powering through conference play.

No. 2 UCLA softball (40-2, 14-1 Pac-12) dominated Oregon State (21-18, 3-13) over the weekend, outscoring the Beavers 25-3 in the series. After the Bruins lost just their second game of the season to the Oregon Ducks (21-22, 4-11) the weekend prior, junior outfielder Bubba Nickles said a big reason for their renewed success was the team’s power hitting against the Beavers.

“It’s crucial for us to be able to hit the long ball as well as play the short game,” Nickles said. “With games like this weekend, we were trying to focus on our swings and the process.”

The Bruins started the season by hitting 28 home runs and scoring 203 runs in their 27 games against nonconference opponents – good for an average of 7.5 runs per game.

But as the Bruins moved into conference play, the power took a backseat as UCLA instead had to rely on small ball to score runs when it struggled to win against more talented pitching staffs.

In one such case, neither UCLA nor their opponent California were able to record more than five hits in the second game of their series. The difference ended up coming on a defensive error from Cal that allowed sophomore utility Kinsley Washington to score after she had singled, stolen second and advanced to third on a groundout.

“The expectations of being able to win, the idea that we should run-rule everybody, we should hit, would be great but they aren’t always easy tasks,” said coach Kelly Inouye-Perez. “The goal is to be able to do everything that we can, whether it’s a lot of runs or a run-run ball game. We focus on getting people on (base), moving people over, and manufacture runs.”

After a few weeks of relying more on small ball for runs, UCLA hit .371 in the Oregon State series as a team and recorded four home runs and four doubles on the way to the sweep. Nickles was a big part of that offensive explosion, hitting .700 for the weekend with two home runs and seven total hits, going 3-for-3 in both the first and second games.

Along with the return of its power hitting, UCLA also continued to utilize small ball over the weekend, as Nickles and freshman utility Kelli Godin both stole a base, and the Bruins took advantage of errors to score four unearned runs.

“If you play short ball, you’re going to need someone to hit the long ones, and vice versa. You need to get people on base,” said freshman utility Colleen Sullivan. “When we hit long balls, a lot of our pressure is taken off because we get a lot of runs, but I think we get more energy from the dugout and the combination (of the two styles).”

UCLA now has the highest team batting average in the Pac-12 at .349. The Bruins are also tied for the best on-base percentage at .426, and are in third place behind the Arizona schools in slugging percentage at .555.

With the last few series of the regular season coming up, including a home series against No. 5 Arizona (38-7, 15-0) in two weeks, Inouye-Perez said the Bruins know they have to continue to excel in all parts of the game if they want to win.

“Bottom line: Great teams find a way to win,” Inouye-Perez said. “For us, whether it’s by a lot or by one, whether we hit the long ball or put pressure on the defense until they make an error, the goal is to win.” 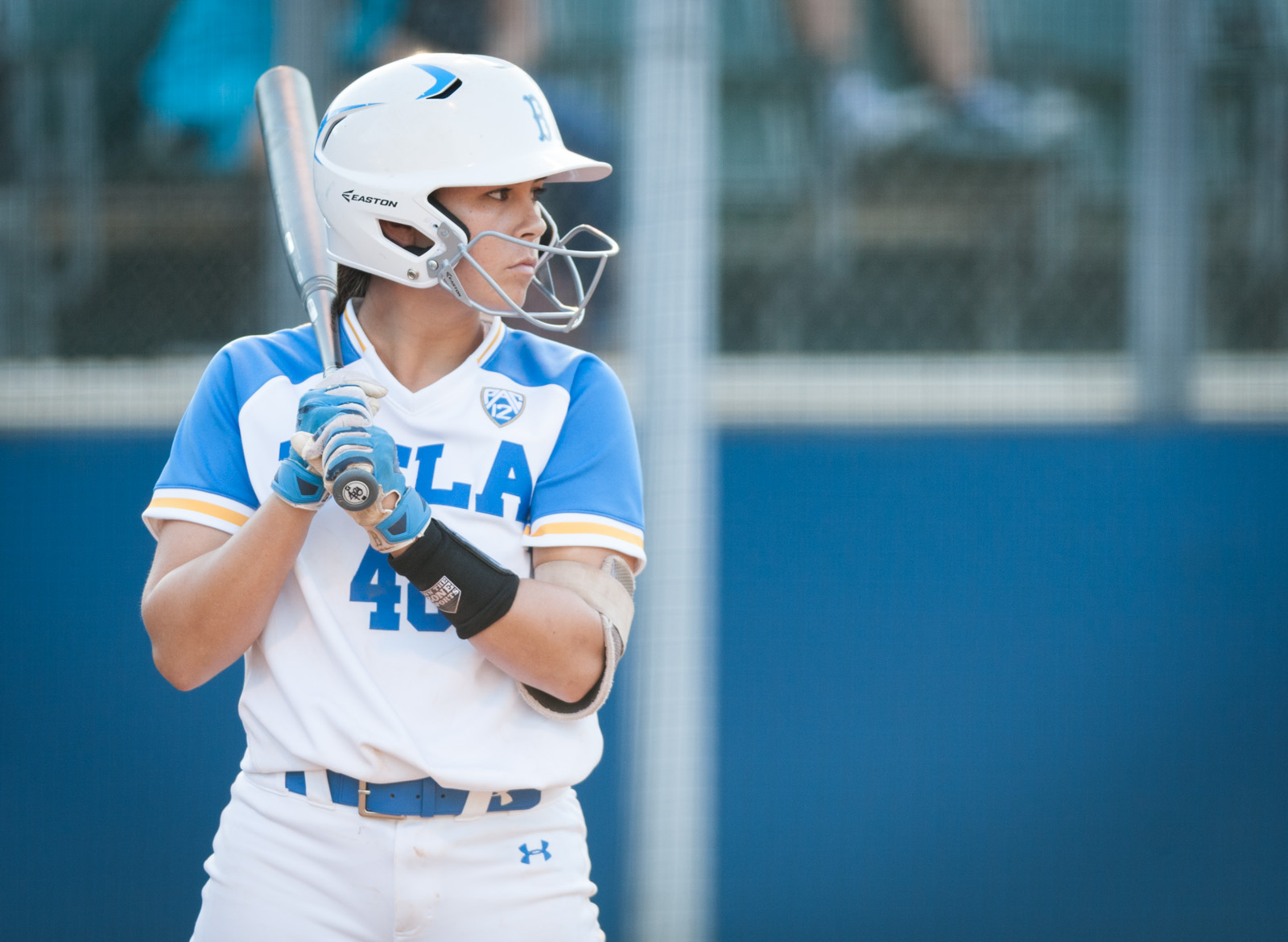