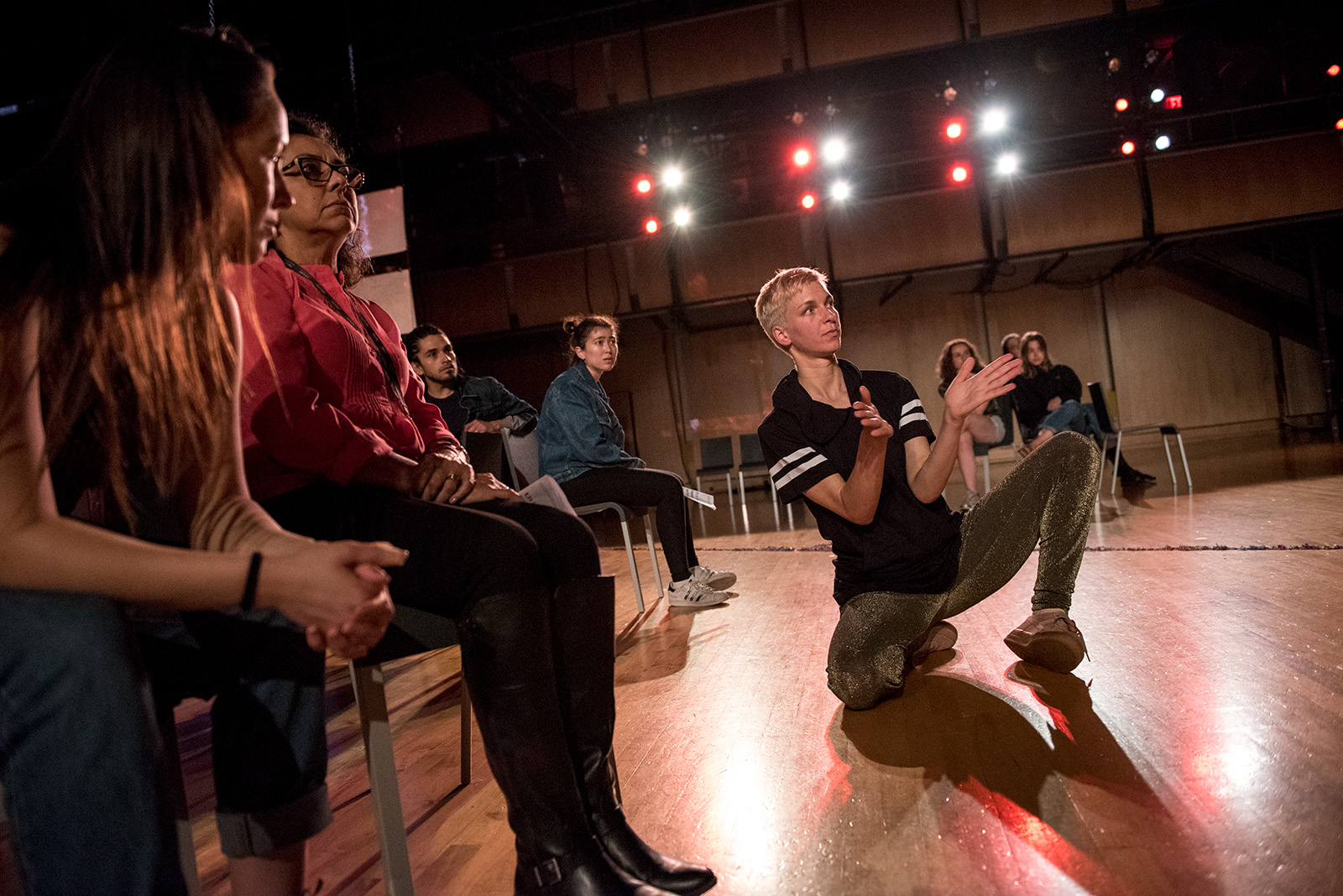 “This must happen before the end” is composed of two group dances, choreographed by graduate students Kristianne Salcines and Levi Gonzalez. The show will take place Friday and Saturday. (Niveda Tennety/Daily Bruin)

"this must happen before the end."

Blindfolded dancers will take the floor for a portion of “this must happen before the end.”

The showcase, composed of two group dances, will take place in Glorya Kaufman Hall on Friday and Saturday. World arts and cultures/dance graduate students Kristianne Salcines and Levi Gonzalez choreographed “Afternoon Experiences” and “subpolyversadiscoteca,” respectively, for the show. The dances are meant to challenge the traditionally separate roles of audience and performer, Gonzalez said.

“When people say audience participation, I usually cringe,” he said. “So I was trying to figure out my way of doing this, of having an engagement with the audience that didn’t feel abusive, or gimmicky, or kind of putting people on the spot, but still managed to ask questions and do some thought-provoking.”

In Gonzalez’s “subpolyversadiscoteca,” seats for the audience will be scattered throughout the otherwise empty space. This arrangement, he said, is meant to highlight the dance floor’s openness. To interact with viewers, the individual dancers will share stories about their life experiences and come very close to the audience to emphasize the sense of physical proximity, he said. Audiences have a chance to learn about performers during a performance they might otherwise only watch, Gonzalez said.

Gonzalez said he wanted to make the art more accessible by adding relatable sections to his performance. A disco section of the piece, for example, is meant to elicit the audience’s memories of dancing in a club during their own lives, he said. As the music plays, the performers dance near the seated audience and make eye contact with other audience members from across the room, which adds another level of interaction, Gonzalez said. “Subpolyversadiscoteca” includes more focus on the sound of the dancers’ voices and their close contact with the audience, Gonzalez said. These interactions challenge the tendency for performances to be purely visual and expand the piece at hand to be a sensory experience, he said.

“The piece is actually about … kind of reframing the interaction between audience and performer as an active one, and a central one, and one that involves our bodies in a very clear, multisensory way,” he said.

Audience members will share their own stories to contribute to Salcines’ piece, “Afternoon Experiences.” Prior to the performance, attendees are invited to share experiences in a workshop setting, which they then translate into images, words and sentences on paper. The dancers then create a map based on the visual continuities among the stories and translate them onto the stage. “Afternoon Experiences” uses an improvised dance style within the mapped-out space, Salcines said. The performers can use the space to express both their own experiences and those of the audience members, which lessens the perceived artistic separations between the performers and attendees, Salcines said.

“The way in which I have put (the audience) in the space … feels like a comment about something around where we are standing,” they said. “We meet in the same place and stand in the same ground, and there shouldn’t be a separation between the performer and the audience.”

The maps add more spatial structure by creating a designated area that constrains the dancer’s highly improvisational performance, said Randy Reyes, a freelance choreographer who collaborated with Salcines. The audience members shape the performances’ structures – depending on the outcome of their maps and how they are translated onto the physical stage – but the performers have full agency to move how they want within that space, Reyes said.

“Oftentimes, a performance can turn into being just entertainment, and this is more about an energetic exchange, and trying to get the audience to see themselves in what’s happening with the emotions and trauma,” Reyes said.

The open style of “Afternoon Experiences” makes it vulnerable, said Diana Thielen, a movement artist who also collaborated with Salcines. The performance will display the story maps from both audience members and dancers on strings that hang from the ceiling, Thielen said. Viewers can walk around during the dance, she said, choosing to view the maps or approach the performers. The liberty that both the audience and dancers possess creates a piece that feels independent, Thielen said. She added that performers and viewers can relate to each other because of the societal experiences they share.

“(The freedom) gives me agency as a dancer, performer and as a human being to be more than only a physical entity,” Thielen said. “There are some (experiences) I carry with me every day and they might be different tomorrow than today.”