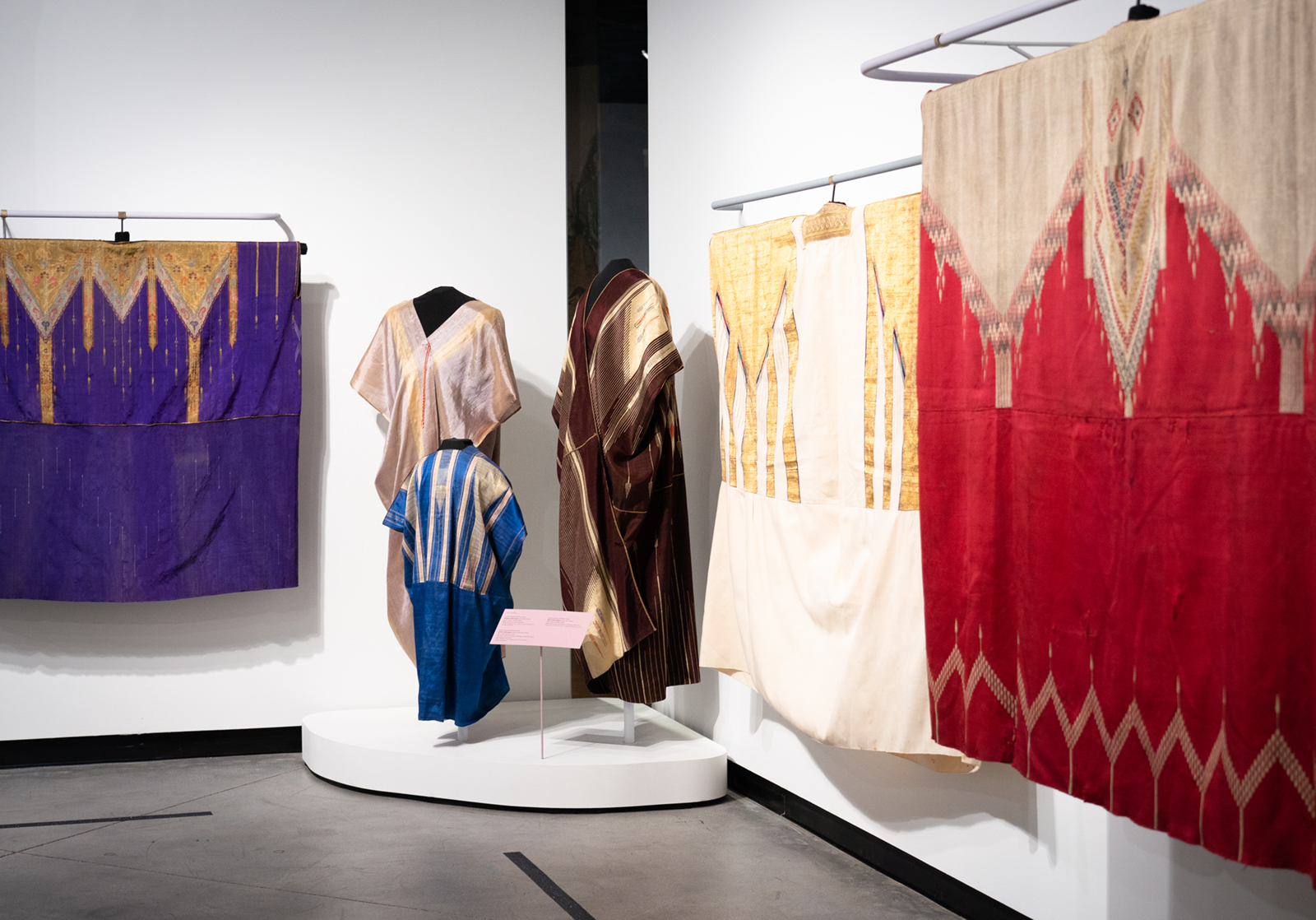 Robes with metallic accents will be part of the Fowler Museum’s exhibit “Dressed with Distinction: Garments from Ottoman Syria.” The pieces were worn by the Syrian elite. The displays will highlight and celebrate Syrian’s lost textile industry, said textile archaeologist Gillian Vogelsang-Eastwood. (Elise Tsai/Daily Bruin)

Correction: The original version of this article incorrectly stated David Reisbord is a collector. In fact, he is a curator.

Robes with metallic accents once served as the fashion of upper-class individuals in Syria.

Such traditions will be brought into the present through “Dressed with Distinction: Garments from Ottoman Syria,” an exhibition running through Aug. 18 at the Fowler Museum at UCLA, showcasing pieces like robes and jackets. The exhibit highlights clothing from early 20th century Syria, featuring Ottoman styles. Christian de Brer, Fowler Museum’s director of conservation, said the pieces appealed to him because of the variety of dyes, the hand-weaving techniques and gold and silver threads running through the clothing.

Gillian Vogelsang-Eastwood who is the curator for the exhibit and has worked with them for her research. She said she looks at present-day exhibitions to study how textiles were made. After working as a textile archaeologist for 30 years, she began collecting Middle Eastern clothing during her role as director at the Textile Research Centre in Leiden in the Netherlands. The pieces in “Dressed with Distinction” are important to understanding Syrian culture, Vogelsang-Eastwood said.

“Even if (the exhibit) just means people say that’s where Syria is, at least (it will make people more aware) of where these countries are and aware of … how glorious they are and beautiful,” Vogelsang-Eastwood said. “It’s slipping away, all of this beauty.”

Collector David Reisbord said his interest in Syrian objects grew after touring the country and visiting bazaars there. But he could barely find anything written about Syrian clothing, so he decided to learn by collecting his own textiles. At first, he collected items he simply found interesting, but later began to focus on items from specific ethnographic groups, such as clothing from Syria.

The robes and other clothes in the exhibit are from the Ottoman Empire after World War I, Reisbord said. It was worn by upper-class members of Syrian society, but is rarely worn by anyone today, he said. Most of the clothing share common themes, such as patterns of upside-down triangles and gold and silver threading. But there are variations in each piece, such as some differences in color. The upside-down shapes also vary in size as well as in level of detail. Some viewers may see the commonalities among the pieces and consider them monotonous, but when considering the differing patterns and colors, the pieces are actually eye-catching and striking.

“I just like to accumulate beautiful things,” Reisbord said. “Starting out as a collector, I never dreamed that I would have a collection of any significance.”

De Brer said that, when conserving the clothing pieces, he focused on the metallic fabrics weaved throughout. The metallic hints were always used as the decorative elements in the clothing, and, after the pieces had experienced some wear, it was easy for those threads to be lost or tarnished. Discoloration would make them appear darker or of a matte texture, he said. While he could not do much to fix the wear over time, de Brer said the changes in the clothing show that it was consistently used, rather than worn every once in a while as ceremonial garb.

“The most serious side of the exhibition I think is the war in Syria and the destruction in the last few years of the textile industry,” Vogelsang-Eastwood said. “It’s celebrating this amazing tradition of textiles, but it’s also to be aware of what war can do, because this textile industry will never come back again.”