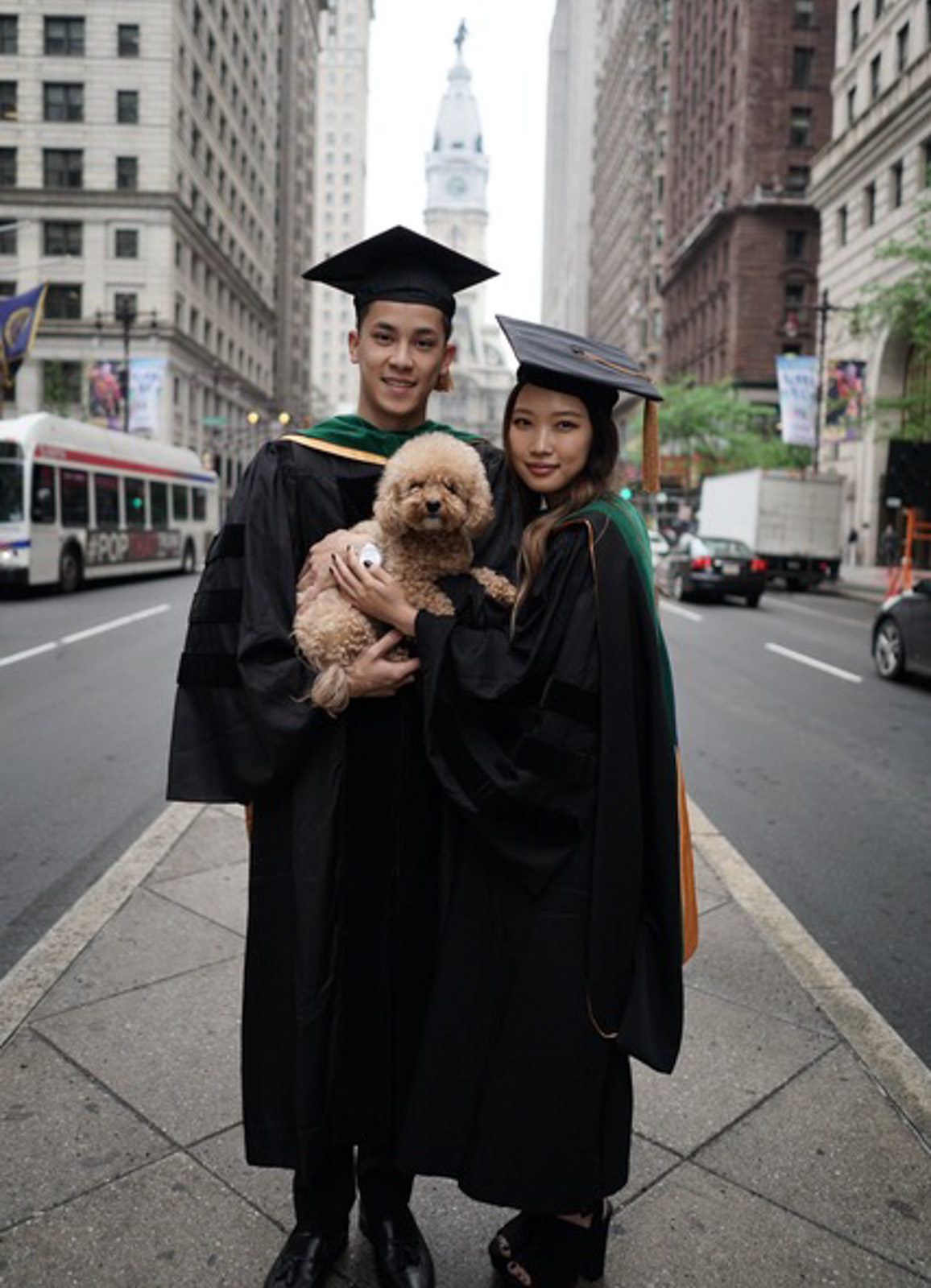 Alumna Jane Lee (right) and her boyfriend Jady Pham run a YouTube channel together under the name JaneandJady. The couple met at their medical school orientation in 2014, and now use YouTube as a platform to discuss their experiences as medical school graduates and current anesthesiology residents. (Courtesy of Jane Lee and Jady Pham)

The couple now runs a YouTube channel together with over 100,000 subscribers based on their experiences as anesthesiology residents and medical school graduates.

The two started their channel, JaneandJady, in 2015 and have since created 200 videos. Pham said he and Lee initially posted lifestyle content, such as ice skating vlogs and grocery hauls, not focusing on their academics. However, people began to pick up that they were medical students and asked questions about their experiences, leading them to upload videos on the admissions process, choosing the right medical school and study tips. Lee said she has found online resources like message boards helpful and felt she could give back to other students who are currently on the pre-medical path. In particular, she wanted to be frank about the strenuous conditions medical students face and not romanticize the process.

“The reason we started this is to add to the repertoire of resources for pre-med students and medical students to help them, because this process requires help – nobody could do this alone. Growing up, I loved looking online and asking people their experiences and their advice,” Lee said. “I would have loved to have these YouTube channels and talk to those people.”

Though most of their videos include tips and encouragement, Lee said she and Pham have not shied away from the difficulties and stressors of becoming a doctor. In one of their videos, titled “What is Medical School Like (All 4 Years) | Med Student Vlog,” Lee said typically, the first year of medical school entails waking up before 8 a.m. and attending three to four lectures in the morning, then studying for the rest of the day. In other videos, she talked about not having time to do laundry or dishes and working 12 days straight without time off during residency.

She also said medical school can be time-consuming and draining, and most medical students have to sacrifice time devoted to loved ones and hobbies. It can be hard to be open about the negative aspects of pursuing medicine, Lee said, as she doesn’t want to sound ungrateful or discouraging. However, she said prospective students deserve to know the obstacles they will face.

“It’s so important to be realistic with everybody, not glamorize medicine, because a lot of people think, ‘Oh, my God, being a doctor is so great, you get to save lives,'” Lee said. “They forget about the sacrifices that come along with pursuing medicine.”

JaneandJady’s authenticity is what drew in Dania Abid, who has been subscribed to the channel for the last four years. Abid said she found many of JaneandJady’s videos useful, including “Applying to Medical School with Low MCAT/GPA | JaneandJady,” which she said debunked myths that medical schools only accept people in the top 10% of their class. She also appreciated that their videos provide viewers with a detailed portrayal of Lee’s and Pham’s lives during the residency process.

“Initially, when they were both at (Drexel University College of Medicine) they gave a lot of advice on pre-med for pre-med students. Once they got to residency, they had a really hard time balancing crazy amounts of hours,” Abid said. “They became really honest about their experiences about how challenging it was.”

Once they graduated in 2018 and moved to New York City to begin their residency programs – where they both specialize in anesthesiology – Lee said they began focusing on giving advice to those who want to pursue the same specialty. They posted videos on their work, such as “Being Honest: Stress of a Doctor in Residency.” She also said she wanted people to know the switch from student to worker can be significant: Students transition from focusing only on their schedules to being accountable to their employers.

Besides preparing prospective medical students for the intense workload, Pham wanted to convey to subscribers the importance of personal time. Even with their hectic schedules, Pham said that he and Lee prioritize their hobbies, such as filming YouTube videos, because it provides a way for the two to destress throughout the week.

When it comes to collaborating on their channel, Lee said both she and Pham bring something specific to the table and can create a nuanced perspective. Lee said she enjoys adding creative elements, such as on her personal Instagram page, @theanatomyoffashion, on which she posts beauty and fashion content, like a discussion of Korean skin care trends. Conversely, Pham handles most of the technological aspects of the channel, including filming and executing ideas.

Whether they are filming a vlog about their daily lives, working on a video on cardiac arrest or answering frequently asked questions about medical school, Pham said he is happy that both he and Lee are able to create content he feels is beneficial to so many people. Having always been a fan of YouTube – specifically the videography and editing aspect of it – Pham said he is glad that he’s able to contribute to the platform in this way.

“My favorite part is knowing that we’re able to help people,” he said. “Whenever we get a message saying, ‘Oh, your videos definitely made an impact on us,’ or ‘Watching your videos gave us motivation to study harder,’ I think that’s probably the coolest part about the YouTube channel.”