The Quad: A look into UC employee union strikes in the past year, reasoning behind them 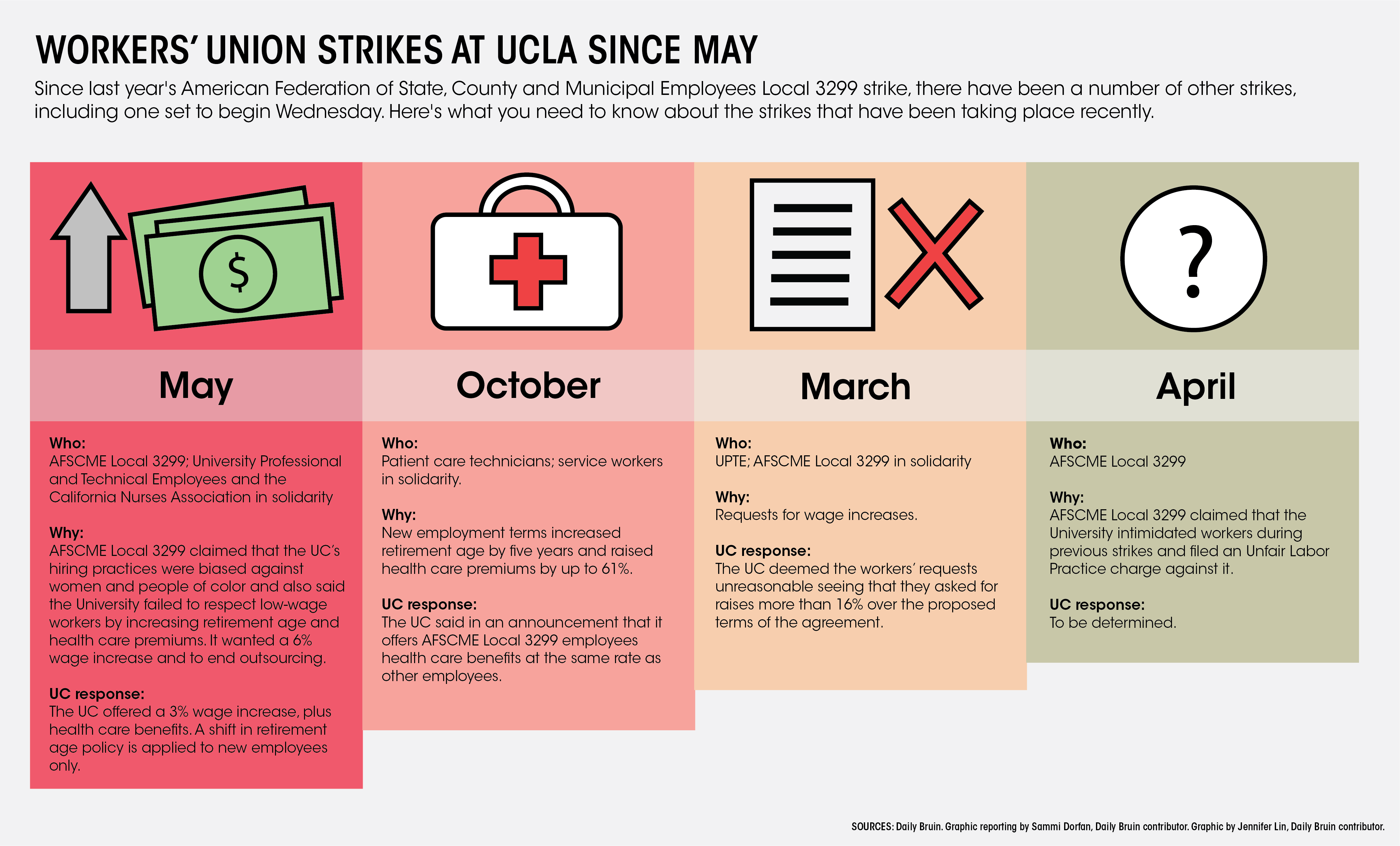 For the fourth time in the last year, UC workers will assemble at the picket line to exercise their rights protected under the National Labor Relations Act. Since previous negotiations between workers and University administration have proven fruitless, it is unlikely the strike set for April 10 will be the last.

Such strikes weren’t always so ubiquitous on our campus. While negotiations have been in the works since 2012, May marked the beginning of a series of public displays of workers’ efforts to end outsourcing and ensure more fair pay and benefit policies.

Claire Doan, a UC Office of the President spokesperson, said in an email statement the UC pays patient care and service workers at or above market rates with excellent benefits.

The American Federation of State, County and Municipal Employees Local 3299, the UC’s largest employee union, which represents more than 24,000 service and medical workers, claimed in April the University failed to respect low-wage workers by increasing retirement age and health care premiums. At the time, Doan said the shift in retirement age policy only applied to new workers.

The union rejected the UC’s final proposal, which included a 3% wage increase and other health care benefits, asking instead for a 6% increase, and held a strike for three days alongside the University Professional and Technical Employees and the California Nurses Association who joined in solidarity.

“Since bargaining started with both unions in 2017, AFSCME leaders have refused to put any of UC’s competitive proposals up to a membership vote,” Doan said.

John de los Angeles, an AFSCME spokesperson, said the workers’ strike reflected their desire to close the wage gap between themselves and better paid UC employees.

“They were raising issues over what they believe to be growing income inequality between the top of UC’s administration and the workers who run the University every day,” he said. “We believe that this is in part being driven by the University’s desire to outsource jobs that have traditionally been performed by these workers.”

But it wasn’t just outsourcing that AFSCME Local 3299 thought was unfair. The union felt the UC’s hiring practices were biased against women and people of color.

Then in October patient care technicians held a strike in response to new employment terms which increased retirement age by five years and raised health care premiums by up to 61%. Once again, service workers joined the technicians in solidarity.

The UC wrote in an announcement that it offers AFSCME Local 3299 employees health care benefits at the same rate as other employees, some of whom are represented by other unions.

[RELATED: AFSCME strike comes to a close with hopes of a new deal for UC employees]

De los Angeles said the UC cannot see the validity in workers’ concerns and as a result has been unable to address them.

“I would say that the University is choosing time and time again to ignore these very valid concerns. It has not acknowledged the existence of these problems and … when asked about these issues, the university typically responds with something completely irrelevant,” de los Angeles said.

The University, on the other hand, made clear through a statement at the time it believes disrupting normal quotidian affairs through strikes is not as effective as sitting down and bargaining to achieve reasonable compromises.

University Professional and Technical Employees-Communications Workers of America 9119, representing around 14,000 UC research and technical workers, held a strike March 20 as a last resort after 22 months of bargaining to no avail.

Doan at the time said UPTE-CWA 9119 asked for raises more than 16% over the proposed terms of the agreement, a request the University deemed unreasonable.

“This is, from the perspective of workers, an attempt by the University to silence the voices of those raising their concerns,” de los Angeles said.

He said the intimidation ranged from workplace harassment to threats of police citation to violent physical assault. For example, one striker and employee at UC Berkeley required stitches after being arrested.

The strike scheduled for April 10 seems to be less about the issues about which workers struck three times prior and is more in response to the University’s alleged maltreatment of its workers on the picket lines.

“At issue with this upcoming strike is something much more fundamental than wages or benefits – it’s about whether or not workers at the University of California even have the right to raise these issues, to voice these concerns, to protest and strike against them,” de los Angeles said.

In response to AFSCME Local 3299’s announcement to strike for a fourth time, a UC spokesperson said again that striking is a futile, disruptive attempt to achieve their end and that negotiating would prove far more productive.

“We’ve offered compromises on wages, service contracts and pensions, while union leaders have not budged on those issues,” Doan said.

The disruption that these strikes create is undeniable. Not only are students faced with limited dining options, but the ruckus from the picket line makes for an environment neither conducive to studying nor sleep.

De los Angeles said students are vital to the workers’ efforts to champion change. Because of the fact that a lot of the workers work multiple jobs or have familial obligations, the students can fill in for them when they are unavailable to be present during a protest.

“Students are extremely valuable and important to workers in the sense that they can offer to fill this void,” de los Angeles said. “They have the ability to go and put bodies on a picket line and to sit in and to voice these concerns.”