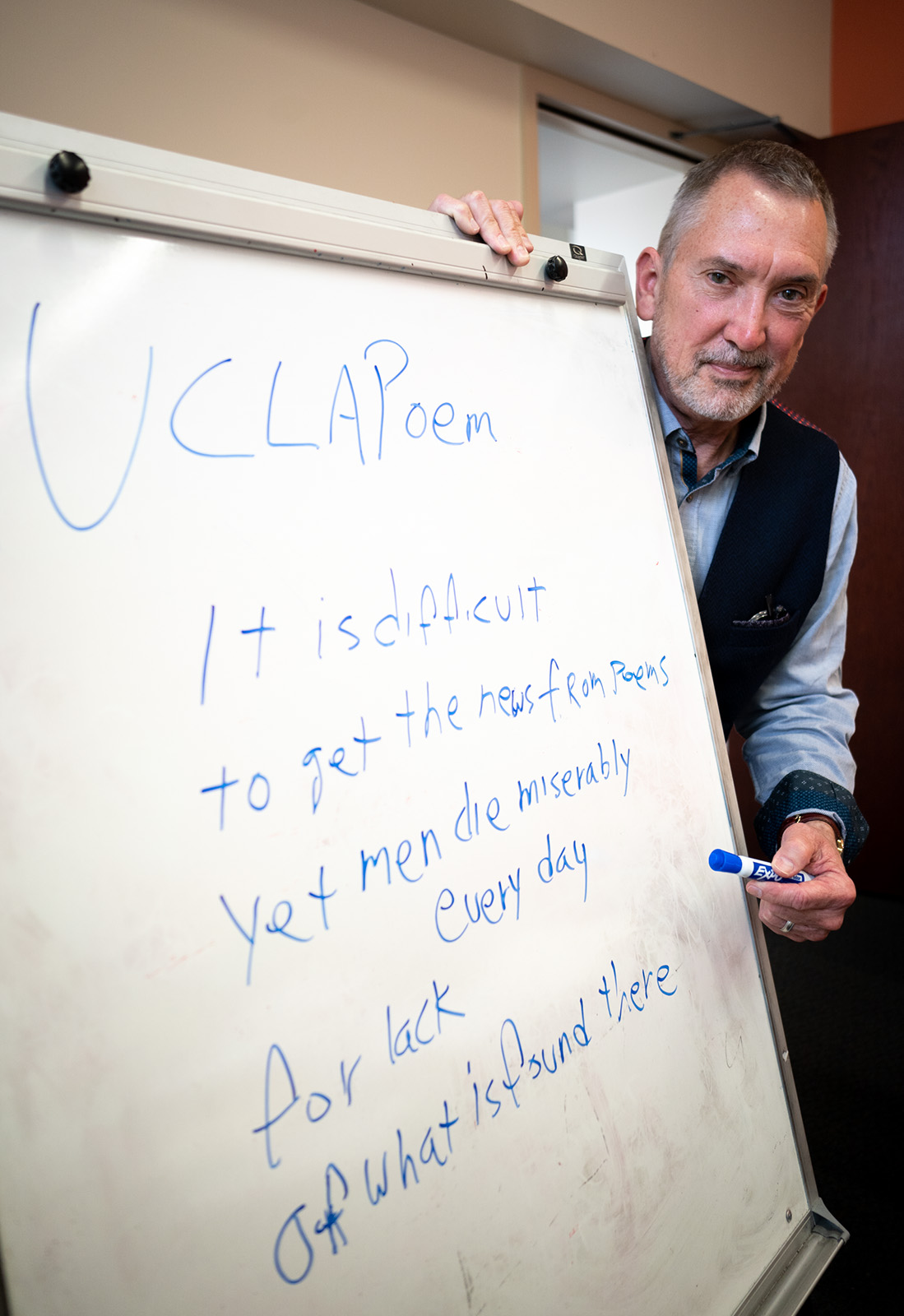 English professor Reed Wilson conceived UCLApoem, a student-run organization that aims to foster an appreciation of poetry across students of all academic backgrounds. UCLApoem will host multiple poetry readings and events throughout spring quarter, encouraging students no matter their prior experience with the subject. (Niveda Tennety/Daily Bruin)

Every member of the UCLA community should read or hear a poem sometime between this April and June, said English adjunct assistant professor Reed Wilson.

UCLApoem – Wilson’s brainchild – is a new student-run organization that will organize several poetry readings and events during spring quarter, with the goal of directing an annual UCLAPoetry Festival every spring quarter. The class is also offered for credit as English M192.2: “Public Poetry Project.” Wilson, Creative Writing Coordinator for the English department, said the organization originally started as a practicum course in winter quarter 2018. But there are nonliterature students who wish to develop their affinity for poetry and don’t know how to do so, Wilson said – through UCLApoem, he hopes to help these students and demystify the subject.

“The late poet W. S. Merwin once said that when times get tough, people turn to poetry,” Wilson said. “It’s always there as a source of inspiration, wisdom and advice.”

Wilson blames the way poetry traditionally has been taught – with books in a classroom. He said he hopes to invigorate some of the great tradition of poetry in live readings that invite a more sensuous experience. Students also tend to be more aware of works by dead poets, as opposed to contemporary poets, Wilson said. He wants to pay special attention to living poets, like Jane Hirshfield or Brian Turner, in an effort to better engage students.

“We certainly want to foreground our efforts in the living art of poetry,” Wilson said. “By understanding the living art, that draws people back to the inspirations … from the past.”

Annalis Masters, a fourth-year political science student, said she was not exposed much to poetry in high school. Even now, because she is not an English student, poetry is not part of her curriculum. Masters said the stigma of undertaking artistic endeavors without an art background was discouraging, and she felt like she wouldn’t understand the poetry she attempted to. But after joining UCLApoem last quarter, she gained an appreciation for the art through Wilson’s weekly assignments.

The assignments were simple: Each student sent Wilson a link to a poem of his or her interest, which Wilson printed out and brought to class for discussion. Wilson said the purpose was to respond to the poem emotionally and intellectually. The English students had more literary context in their responses, but all students, regardless of their academic background, had similar emotional and intellectual responses to each poem. Masters said she enjoyed being treated the same as any other student in the class.

“A lot of students from other departments like (political science) or (economics) or the sciences would really benefit from reading poetry,” Masters said. “It’s important to break the stigma.”

Masters was encouraged to join UCLApoem by her roommate, Katheryne Castillo, a fourth-year English student and the organization’s student director. In earlier iterations of the class, Wilson would assign poems he considered difficult to comprehend, Castillo said. The exercise forced her to consider the perspective of a nonliterary student, she said, and the experience was akin to approaching poetry for the first time.

Castillo said it was one of the activities the original class presented last year that convinced her to join the organization. American poet Frank O’Hara wrote poems during his lunch breaks and compiled them into a book called “Lunch Poems.” Inspired by him, the class organized an event on the steps of Powell Library to read O’Hara’s book aloud while students sat and ate lunch.

“I thought it was so cool to have poetry being read. … People would randomly come in and sit down to join on the steps,” Castillo said. “It was such a peaceful event.”

For fourth-year English student Jodi Scott Elliott, the finer details of language drew her to UCLApoem. Elliott is an editor of Westwind Journal, the undergraduate journal of the arts, and while she said she has a background in fiction and nonfiction writing, she recently has been more interested in poetry. As a writer, poetry has helped Elliott look at language in a way that is very different from other forms of literature. She said it helps her slow down and consider individual words, punctuation and syntax in order to achieve the desired message.

“All forms of writing are communication,” Elliott said. “Sometimes, (writers) forget that we’re actually one person trying to communicate something to another, and we get lost in the artistry of the words.”

Wilson said he understands students are often barraged by organizations on Bruin Walk, but he wants to set UCLApoem apart by holding poetry events and activities in other places around campus, such as the Court of Sciences, the Franklin D. Murphy Sculpture Garden and perhaps even on the Hill. He wants to reach nonliterarature students in the places where they work and study, Wilson said.

Planned events so far include poetry readings, zine-making, a poem hand-out activity for National Poem in Your Pocket Day on April 18 and a Shakespeare reading event on the Bard’s birthday at the end of the month. Wilson said students often feel they need special knowledge or skills to appreciate and understand a poem, but he hopes to prove that wrong by having activities pop up in places one might not suspect.