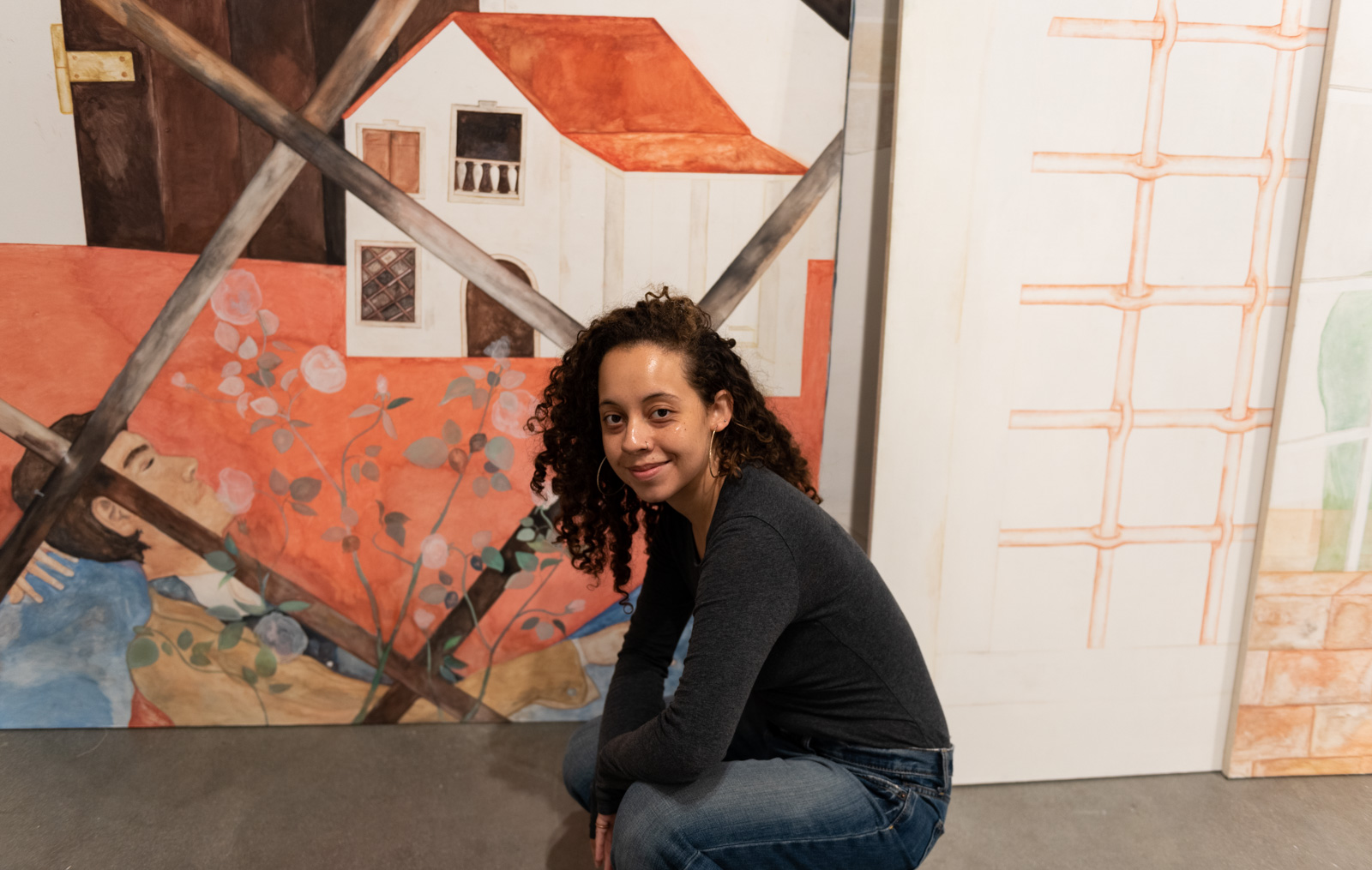 Graduate student Brannon Rockwell-Charland will showcase a variety of artistic pieces to relate black history and feminism to her personal life for her exhibit in the MFA showcase. (Anirudh Keni/Daily Bruin)

The second of four final MFA showcases by the UCLA department of art will take place Thursday through April 12 at the New Wight Gallery in the Broad Art Center. Presented works will include frescos of abandoned buildings, interdisciplinary compilations and photographs examining auto repair shops in the United States and within former Soviet countries.

Graduate students Amedeo Polazzo, Brannon Rockwell-Charland and Aleksey Kondratyev will have their work highlighted in the showcase. Hanna Hur and William Wasserman’s works will also be displayed, but the former declined to comment and the latter did not respond to requests for an interview.

The graduate student said he plans to present a combination of frescos and wall paintings in the showcase. His works, all untitled, feature places resembling suburbs, trailer parks or abandoned construction sites found in Central America or Southern Europe, he said.

“(These abandoned buildings are) never finished, so they remain in the middle of a city or countryside … in this state of in between, and that’s what I look more for. There’s nothing that can’t inspire you in a state like that,” Polazzo said.

One of his wall paintings depicts a ruined construction site with garden chairs lying on the floor and a little brick wall with rebars sticking out. A washed-out painting hanging atop the wall illustrates the decaying interior of an old villa with a person peeking through a bricked-up window.

Polazzo said he uses chalk pastels mixed with water to create the effect of a fresco painting with a light color scheme. Just like a construction site can become an actual building or fall into more decay, he said the washed-out color scheme could either vanish or become even more apparent. Polazzo said this creates the effect of an in between state that serves to disorient the spectator. Combining frescos with traditional paintings enabled him to play with the idea of intertwining inside and outside views, in which the inside becomes the outside, he said.

“Ideally, you’re disoriented and you have to replace yourself in this environment that you don’t know by looking at what is familiar to you,” Polazzo said. “This is an experience that you share with other people. … There’s a sort of equalizing moment that happens because everyone is in the same way replaced.”

Rockwell-Charland centers her artwork around family history and storytelling.

The graduate student plans to showcase an assortment of photographs, drawings, sculptures and personal documents. She said her artwork examines the roots of black history and feminism, relating them to her own life as a black woman.

One piece on display is a photo series called “Talking My Way out of the Paper Bag.” The photos document her trip to New Orleans where she researched the history of quadroon balls, brown paper bag tests and colonial sites. The brown paper bag principle was a test used to determine the degree of privilege an African-American had based on how closely their skin resembled the color of a paper bag. Rockwell-Charland’s photo compilation examines legacies of colorism connected to her research and how the issue relates to her own family and view of the world.

“The great thing about dealing with stuff that’s really deep and personal and has to do with family legacy is that it’s so gratifying to mine that history, but it also puts a lot of pressure on the presentation and the rendering,” Rockwell-Charland said.

Another piece, named “Suitcase Full of Gold,” features a suitcase which holds a silverware set that belonged to her boyfriend’s grandmother and was passed down. The sculpture is a family heirloom that Rockwell-Charland said she chose to present unaltered and in the context of art. She said she processes her place in the world through immersion in the history that defines everyday black women, like the ones who raised her – the family heirloom is a part of telling their story.

Rockwell-Charland said her works draw largely from the ideas of womanism – or black feminism – and minimalism. Because her artwork examines black history and race-related signifiers, she said she finds herself drawn to working with colors such as blacks, whites, grays, beiges and browns.

“I hope people will see something perhaps of themselves in (my artwork) or something maybe that prompts them to reflect on how they see or how they are seen,” Rockwell-Charland said.

Photographer Kondratyev initially traveled to Azerbaijan with the aim of capturing how countries around the Caspian Sea are connected to Southern California’s economy.

But he found the concept difficult to illustrate photographically, so instead, the graduate student shifted gears toward comparing auto repair shops between different post-Soviet countries and the United States. Kondratyev plans to showcase his ongoing project as a set of 16 framed photographs, with the four largest images focusing on auto repair workers. The other photographs are fragments of landscapes from the places he visited, such as the Caucasus Mountains.

Kondratyev said the combination of being born in Kyrgyzstan and having a father who worked in auto mechanics sparked his interest in the project. He grew fascinated by how traders can buy a totaled car in the U.S. and ship it internationally for repair in an eastern subsidiary economy, where the cost of labor is much cheaper, Kondratyev said. Through his photographs that illustrate auto mechanics, he aims to connect these different cultures and economies.

Kondratyev said it was his first time applying stain, or oil, to darken wooden frames. The frames serve to confine the photographs, and the countries they represent, as fragments of the larger work, he said.

“I like the kind of darker tone to it – it creates a frame like literally for the image in a way that I feel like light frames don’t,” Kondratyev said. “I’m interested in the spatial (aspects) of the landscapes as kind of these self-contained fragments of different parts of the world that are in the same physical space.”