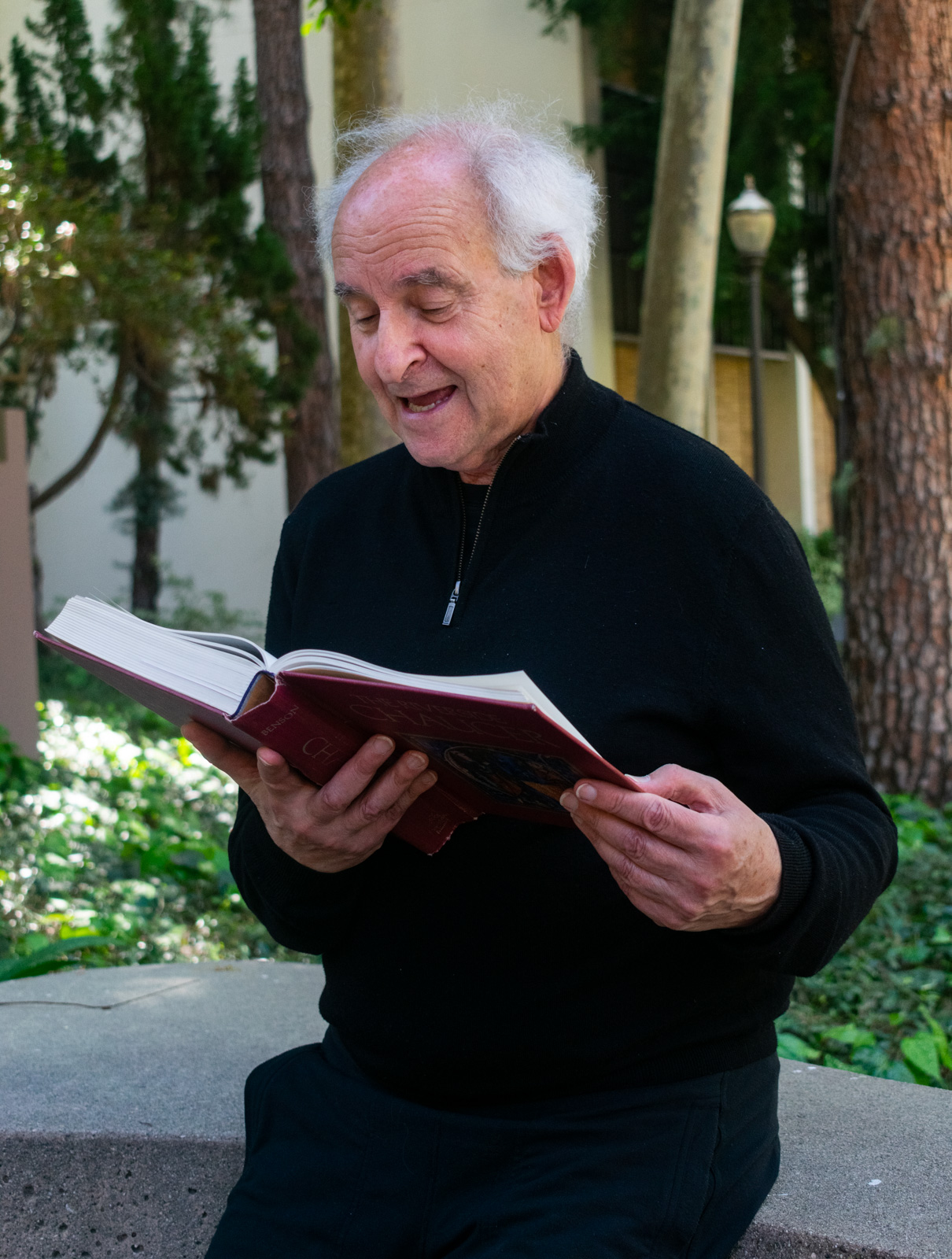 Leonard Koff, an associate at the UCLA Center for Medieval and Renaissance Studies, will give a lecture Thursday. The lecture will tie in philosopher Emmanuel Levinas’ theories with Geoffrey Chaucer’s “The Pardoner’s Tale.” (Daanish Bhatti/Daily Bruin)

The UCLA Center for Medieval and Renaissance Studies will host associate Koff’s lecture Thursday. The lecture applies Emmanuel Levinas’ philosophical theories to “The Pardoner’s Tale.” The chapter, part of “The Canterbury Tales,” is narrated by a corrupt pardoner who uses a cautionary tale to trick listeners into giving him money. As an element of the lecture, the tale will be a conduit for exploring Levinas’ theories about how human existence is defined by interactions.

“(Levinas) offers a way to explain aspects of literature where characters are seen to … understand who they are, how they are living,” Koff said.

Levinas, a 20th-century Jewish philosopher, theorized that one is truly alive only while interacting with the “face of the other.” Engaging in such conversations challenges the idea that one is the center of the universe, Koff said. Levinas proposed confronting one’s perceptions of self-totality is critical to living, he added.

“You encounter another and you let the other impinge on you and you acknowledge his existence or her existence,” Koff said. “That’s the moment where you exist.”

Unlike other philosophers, Koff said Levinas believed people are born into an ethical existence, meaning they must negotiate interactions with others from birth. People who choose to use others for purely selfish ends are not, by Levinas’ definition, alive.

“As you are born … you are already connected to those whom you have moved over so you have a place in the world,” Koff said.

In “The Pardoner’s Tale,” three rioters go out searching for Death, who has killed a close friend and thousands of others, said Henry Kelly, a distinguished research professor of English at UCLA. Ultimately, the three meet their end when an old, immortal man tells them Death is under a nearby tree, where they find a chest of gold and kill each other over it. While the Pardoner is open with his listeners about his corrupt nature, his tale effectively demonstrates through the rioters’ deaths how money causes conflict and sin, Kelly said.

But Koff said this story demonstrates not only Levinas’ theories about interaction and existence but also about art.

Law and philosophy professor emeritus Herbert Morris said by applying philosophy to literary works, people can ask a wider range of questions about the works. As a result, philosophy can lead to alternate interpretations in literature and allow students to be attentive toward their own imagination. Koff said his goal for the lecture is to expand listeners’ previous interpretations of “The Pardoner’s Tale,” using their imagination in conjunction with philosophy.

For Koff, “The Pardoner’s Tale” raises the question of whether or not an immoral person can tell a moral tale. The Pardoner’s story is meant to make listeners want to part with their money to ensure their moral purity, ultimately coercing listeners into a more moral existence, Koff said. A morally corrupt person can still know the difference between right and wrong, even if he cannot follow the morality he preaches.

“Can a bad person … use language to manipulate people into doing good? There’s that sense that you can speak morally, but can’t do moral things,” Koff said. “A person can have a good influence even if he himself can’t do what he says.”

Koff said his lecture will encourage literary fans to reexamine “The Pardoner’s Tale” as more than a canonical text but as one that can also be used to extract questions of morality. Through Levinas’ theories, Koff hopes to expand listeners’ understanding of art and philosophy.

“(Chaucer is) engaging because he’s a philosophical comedian,” Koff said. “I hope (people) come to recognize the value of Levinas’ understanding of what existence is and that existence is already ethical.”