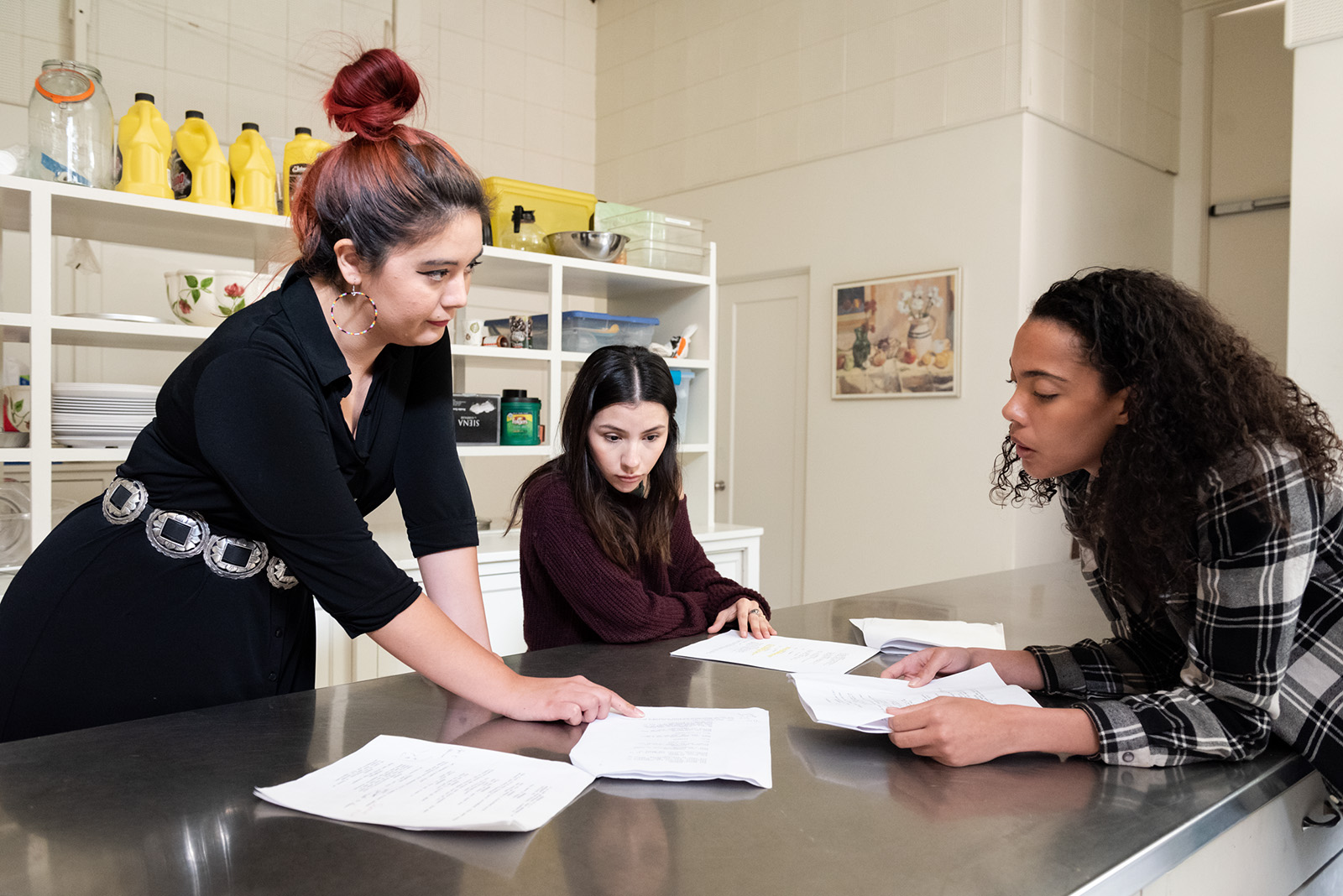 Maya Rose Dittloff, a fourth-year film and television student, Carla Emilian Olivas and Cheree Fraser are part of “STAG PARTIES,” a series written, directed and produced by Dittloff. Olivas and Fraser both act in the series, which will begin filming Thursday. (Tanmay Shankar/Daily Bruin)

In the early 1900s, men often attended stag parties at clubs or fraternities where they paid to watch stag films – a subgenre of pornography – in a group setting.

In the fictional series “STAG PARTIES,” four young women decide to film and distribute their own stag films, hoping to reclaim the subgenre and empower themselves.

Writer, producer and director Maya Rose Dittloff, a fourth-year film and television student, said her crew will begin shooting Thursday. Set in 1920s Harlem, the series follows four women who hope to exploit the toxic masculinity of their time. By producing their own stag films, they have control over the content and earn profits. The film industry has almost always been male-dominated, Dittloff said, but she hopes to empower women by portraying main characters who rewrite the rules of filmmaking.

“’STAG PARTIES’ is saying that the power is given to those who hold the camera, that write the script. Those behind the scenes really determine how audiences perceive the subject matter,” Dittloff said. “Giving that power to this group of young women becomes altogether revolutionary because that means that they determine the future for filmmaking.”

In the series, maids Valentina and Aurora are cleaning a fraternity house when the house’s manager forces himself upon Valentina and kisses her. For Valentina, the experience is dually traumatic, Dittloff said that in addition to the violation, Valentina is a queer woman and is not attracted to men. Meanwhile, Aurora is upstairs, observing a group of men watch stag films, during which she develops the idea of her and three friends making their own.

The gender inequality and power dynamics will be accentuated through the cinematography, said co-producer and cinematographer Cole McCarthy, a fourth-year film and television student. When the fraternity manager forces himself on Valentina, the camera shots of his face will be from farther away, separating viewers from his emotions, but shots of Valentina’s face will be close-up so viewers can empathize with her feeling of powerlessness. During filming, the camera will also look up at the manager but look down on Valentina, rendering her somewhat helpless, McCarthy said.

When Valentina is violated by the fraternity manager, she feels she wants to reclaim her power over her body, said Carla Emilian Olivas, the actress who plays Valentina. While stag films were produced for the male gaze, Olivas said having the women make the films is sex-positive and empowering, as the women are making their own choices about their bodies.

The women are making the decisions every step of the way and have their own say, making filming a safe space, Olivas said. When the women are engaging in something intimate, like shooting their own stag films, they know other females have their back and will not ask them to do anything that makes them feel uncomfortable, she said. In the series, the women set their own boundaries, making sure they discuss what they feel comfortable doing on camera.

As men started to take over the film industry, they pushed women to the bottom of the ladder, and in directing stag films, they would just tell women what to do without considering their comfort on camera. Additionally, the women are gaining the profits made from the films by creating and distributing them instead of men, Olivas said.

“I think ‘STAG PARTIES‘ is kind of just rewriting that history and saying, ‘No, we’re going to be our own filmmakers and we’re going to take this industry and make it our own and not have it be dominated by a male,’” Olivas said.

“STAG PARTIES” emphasizes how people who have been belittled can take back their narrative, Dittloff said. As a queer woman of color herself, Dittloff said she developed the idea for the series when considering what she wants to watch when switching on her TV or streaming services: a group of young women trying to navigate the filmmaking world and finding themselves along the way.

“Today what makes good filmmaking, the rules were determined by white men,” she said. “If you’re going back in time and writing those rules as a group of queer women, I want to imagine what that future looks like.”

As the series production process continues, McCarthy said they hope “STAG PARTIES” can be broadcasted on a platform like Amazon Prime, Netflix or Hulu. After the proof of concept is filmed, Dittloff will write the script for the full 40-minute pilot, McCarthy said, later followed by a season one breakdown and where she sees the show heading.

Even though men still dominate the film industry, McCarthy said “STAG PARTIES” will tie in the obstacles women faced in the 1920s with those they face today. Dittloff said the #MeToo movement and Harvey Weinstein scandal have exposed the problems of the skewed gender dynamic in the industry, but with “STAG PARTIES” celebrating women, she hopes to acknowledge and empower the victims through the series.

“Right now in the film industry … how do we actually make change and stop the epidemic of sexual assault that is obviously so prominent in the year 2019?” Dittloff said. “For me the opportunity goes back to the initial conception of filmmaking as a whole, so that meant going back to 1920 and rewriting the rules and the power dynamics of film at the start.”