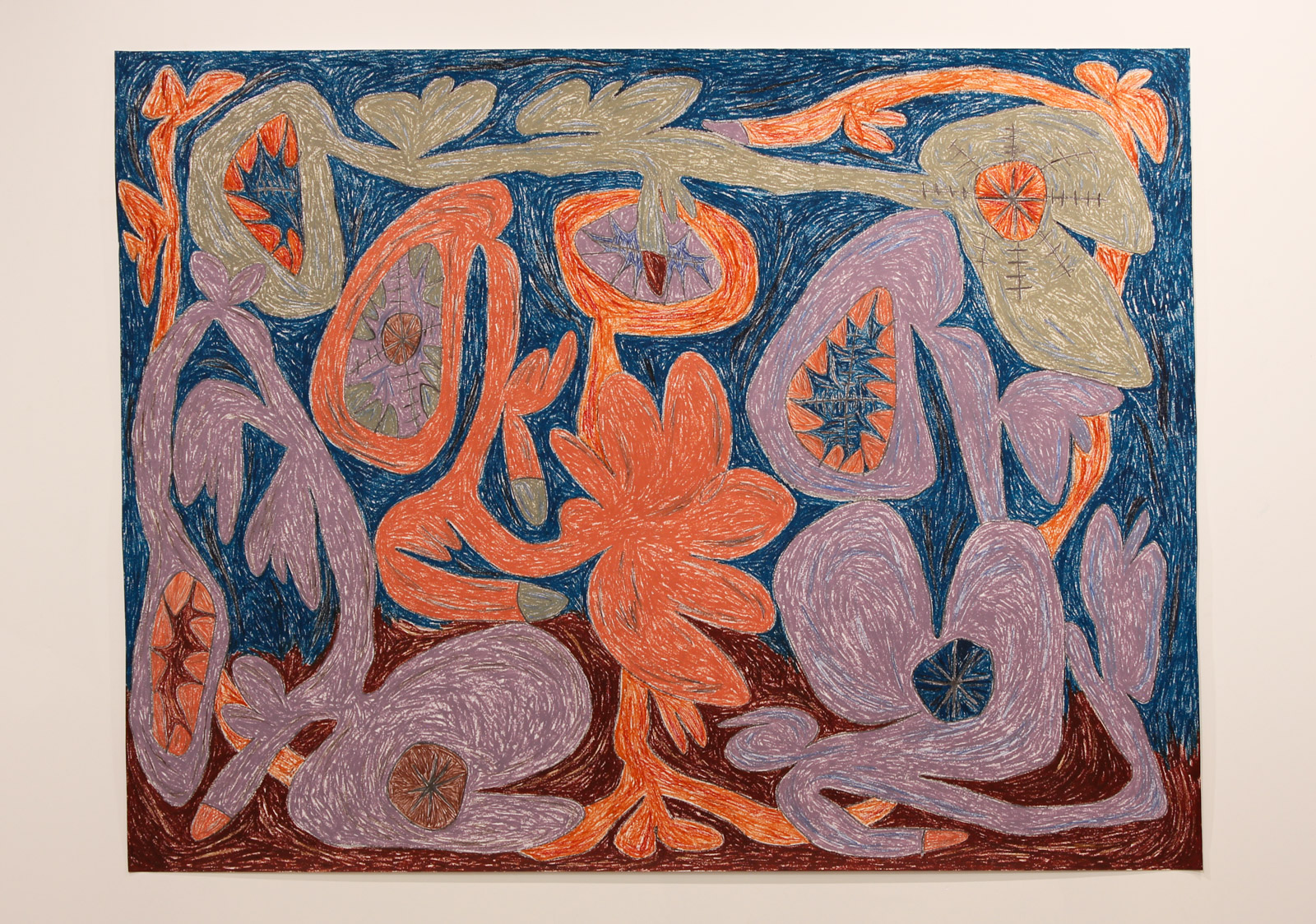 Alumna Nasim Hantehzadeh created “Floating on the river.” The artist usually begins her works by setting pencil to paper, and then develops a narrative for the piece after it is finished. (Courtesy of Nasim Hantehzadeh)

"Color Out of Space"

Hantehzadeh said she begins by setting pencil to paper and only creates a narrative for her work after she is finished, which can sometimes take weeks. Hantehzadeh, who earned her MFA in painting and drawing at UCLA, also creates sculptures and installations. Her work is currently featured in the “Color Out of Space” exhibition at the Lowell Ryan Projects gallery in Los Angeles and will remain on display until April 6. Her artwork symbolically expresses uncertainty regarding her cultural identity, and the media she employs speak to prominent social or environmental issues, she said.

“When I make these works, I focus on my reality growing up in Iran and America, and I feel like I am in a state in between the United States and Iran,” Hantehzadeh said.

Hantehzadeh said she aspires to initiate conversations about different barriers she has faced, such as feeling in between Iran and the United States and like she does not wholly belong to either country. She said her isolated feelings stem from growing up in both countries and being exposed to different cultural values. Moving back and forth from America to Iran during her childhood caused her to lose a consistent sense of home and community, she said.

“I am supposed to know what is happening in the United States system but I do not. I do not know a lot of TV shows or cartoons that my friends talk about when they were growing up here,” Hantehzadeh said. “But then when I go back to Iran, because of my attitudes, I do not belong there either.”

Hantehzadeh uses abstract and geometric forms in her artwork to portray feeling ostracized from both countries, she said. The unspecific shapes in Hantehzadeh’s work do not have specific cultural and social identifications, she said. Her work, titled “Bani Adam,” is currently on display at Lowell Ryan Projects. Based on a poem of the same name by Persian poet Saadi Shirazi, the piece addresses how one cannot be human without exhibiting a sense of empathy. Only after Hantehzadeh finished the initially unplanned art piece did she recall this poem, which she had read in middle school and used to shape the work’s narrative.

“Bani Adam” is a large-scale work on paper created with oil pastels, colored pencils and graphite. Hantehzadeh’s drawing features multiple geometric shapes on a blue background that look like they are separate from each other. However, throughout the work there are drops that can represent various substances, including blood, that seem to move throughout the piece of work. Hantehzadeh said she interpreted the poem to symbolize global warming and the necessity that countries to come together to find a solution. Her upbringing in two different countries causes her to encourage uniting to solve significant issues, she said.

The co-owner of Lowell Ryan Projects, UCLA alumna Virginia Martinsen, said she was amazed by Hantehzadeh’s ability to translate a poem about empathy into a pictorial dimension. Martinsen said Hantehzadeh’s proficiency conveying such themes through her use of unspecified shapes attracted her to the work.

“We look for artwork that has a conceptual essence to it and (Hantehzadeh’s) imagery and concepts had such a strong message,” Martinsen said.

In October, Hantehzadeh participated in a solo show, titled “As I Travel,” at Ochi Projects, an art gallery in LA. Her solo show consisted of three sculptures and three works on paper, all conveying her passing thoughts as she created each piece. The sculptures, titled “Debris #1,” “Debris #2” and “Debris #3,” are created from Styrofoam and concrete to form abstract shapes similar to those in her drawings.

Pauli Ochi, the owner of Ochi Projects, discovered Hantehzadeh and her artwork through a graduate art exhibition at UCLA. Ochi said the bold, bright colors mixed with the light pastels in Hantehzadeh’s art pieces aesthetically fit with the Ochi Projects’ mezzanine space and wooden walls.

“When looking for art to display, we look at the art but also who the artist is as a person – that is very important,” Ochi said. “Everything that (Hantehzadeh) was trying to convey really came through in her pieces, and we are looking to doing something bigger in the future.”

In the coming years, Hantehzadeh said she plans to continue creating artwork based on observations that she makes in her everyday life and displaying it in exhibitions. She said she aspires to acquire more viewers and in turn generate larger conversations about social issues that are often overlooked.

“To be an artist, you have to enjoy what you are doing,” Hantehzadeh said. “You have to be passionate because passion brings hard work, and hard work brings success.”