Edit-a-thon aims to give recognition to more women, arts on Wikipedia 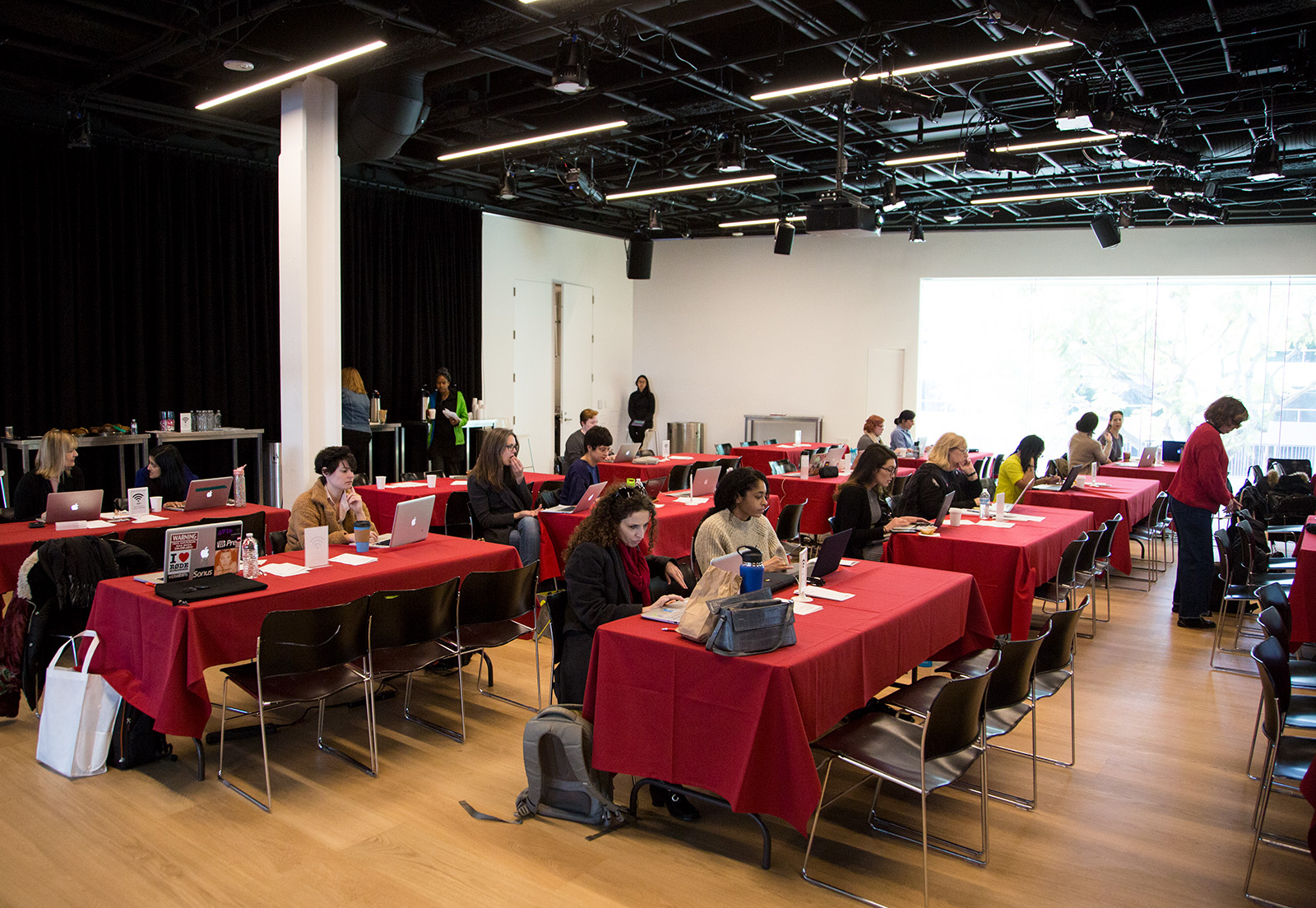 On Sunday, the Hammer Museum held a Wikipedia edit-a-thon in collaboration with the Art+Feminism campaign. The event aimed to educate more women on how to create and edit Wikipedia content, and how to cover topics that are often overlooked. (Amy Dixon/Photo editor)

About 85 percent of Wikipedia’s editors are men, and only around 17 percent of the over 1.5 million biographies on the English Wikipedia are about women.

On Sunday, the Art+Feminism Wikipedia Edit-a-Thon educated participants at the Hammer Museum on how to write and revise Wikipedia articles, specifically about female figures, or film and media created by women. The event aimed to increase female contribution on Wikipedia, said Janani Subramanian, the Hammer Museum’s manager of public programs.

Prior to the event, Stacey Allan, the west coast ambassador of the Art+Feminism Campaign, said the edit-a-thon allowed participants to compensate for content that has historically been missing from the web due to the lack of diversity among contributors.

“When you have a more diverse group of people participating in the writing of history, you’re going to uncover different stories,” Allan said. “The more people involved, the more you get a range of perspectives … and that’s a really important thing to have in such a big worldwide resource.”

The absence of female Wikipedia editors could potentially stem from the gender disparity in computer literacy, Subramanian said, and women’s lack of access to resources that are necessary to edit articles. Female Wikipedia editors tend to work on content more centered around distinguished people and the arts, Allan said, while men lean toward geography and the sciences. Hence the Art+Feminism campaign promotes more coverage of the arts as well as an increase in the recognition of cis and transgender female figures on Wikipedia. Better gender diversity among editors will bring different types of information and perspectives to the site, and could even encourage more mindful gender pronoun usage, she said.

Allan said organizers wanted to highlight females in media and film, like directors and screenwriters, to gain public awareness and support for their contributions. Relating to the theme of the event, Allan used the Wikipedia page of actress Yalitza Aparicio as an example of how articles on Wikipedia are structured and edited. Subramanian also said industry professionals like camera women and stunt women often go unrecognized for their work.

“There’s a lot of names throughout history who haven’t been recognized in terms of film and television, both on-screen and behind the scenes,” Subramanian said.

During the event, Allan informed the audience about Wikipedia principles, such as keeping writing general and having a neutral perspective. Allan also instructed attendees on how to develop and modify Wikipedia articles with their computers, projecting step-by-step visuals onto a screen. Navigating the site, Allan showed the audience that page links in blue means there is existing content for that subject, while page links in red indicate that no information on the subject has been added and edited yet. Subjects on Wikipedia need to have notability to stay on the website, Allan said, and it’s best to find at least three sources to prove this.

After the introductory background information and training, attendees began working on Wikipedia articles. Participants chose subjects to cover either from a list provided by the organizers, or came in with ideas they wanted to research.

Alyssa Davis, an audience member of the event, said she wanted to use Wikipedia to cover female animators from the 1970s. Davis said she attended the workshop to observe how sources are verified for the site and to learn the general process of generating a Wikipedia article.

“I’m constantly clicking on articles and I don’t always fact check to make sure the articles are correct,” Davis said. “I work in the film industry and I think it’s really important for women to be represented on one of the largest … search engines that we have.”

During her presentation, Allan told participants to be bold with their work and not to be afraid of Wikipedia as it is a collaborative effort. Allan said edit-a-thons create a social environment for people to meet and learn from each other. She also said she hopes the campaign enhances the quality and number of Wikipedia articles covering a diverse range of females, including those who may have been overlooked.

“There isn’t a sort of hierarchical editorial framework where there’s one person deciding who’s important,” Allan said. “It’s distributing that power to people all over the world.”