The Quad: Blackface and other racist displays appeared in past UCLA Greek life yearbook pages 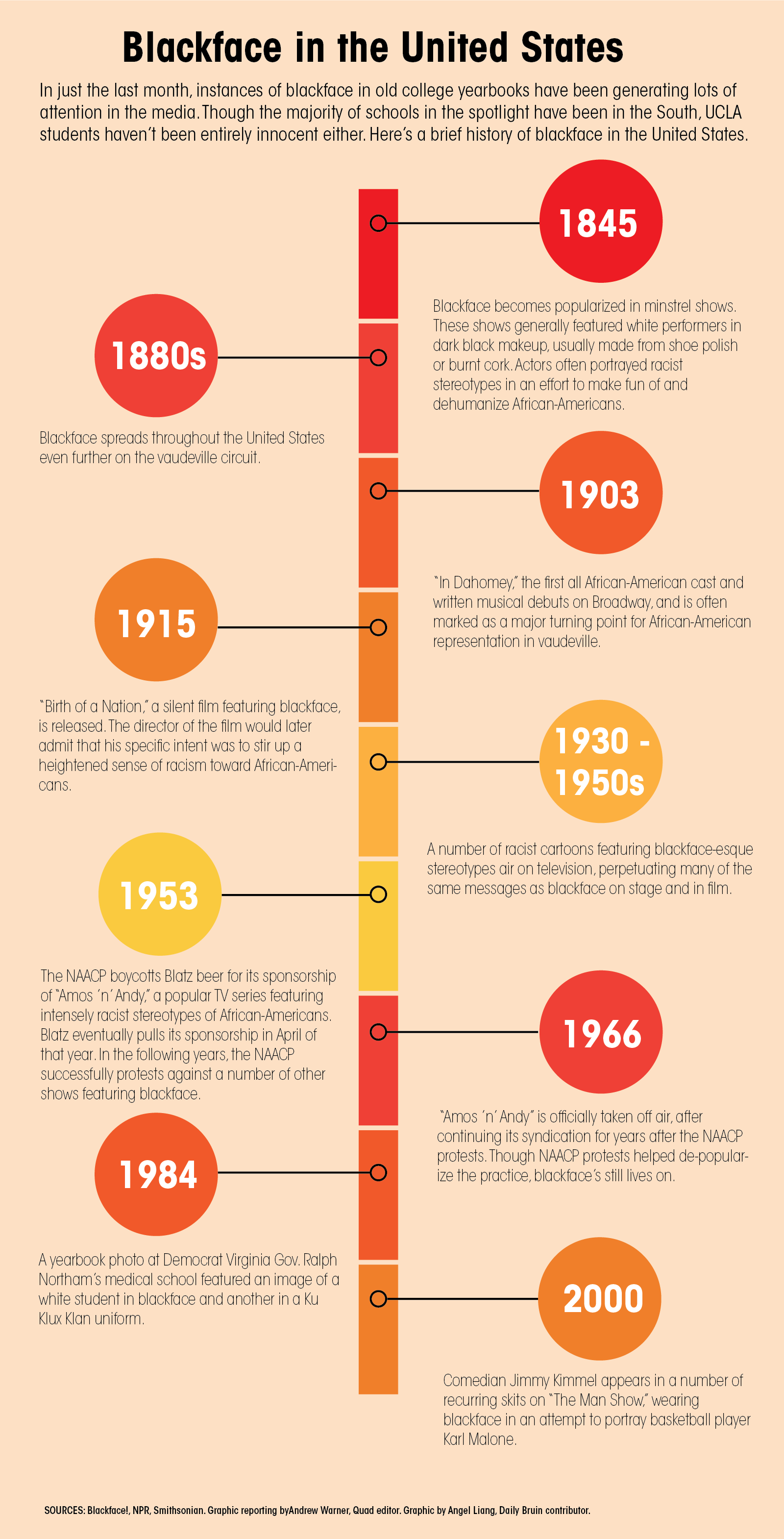 Yearbooks have been getting a bad rap recently.

It started last month with the resurfacing of Virginia Gov. Ralph Northam’s yearbook photo, his page featuring a photo of a man in blackface and another in a Ku Klux Klan outfit. Then there was Virginia State Senate majority leader Tommy Norment’s yearbook, which contained a number of racist images and slurs that he had edited. And then there was Mississippi Lt. Gov. Tate Reeves’ yearbook, where members of his fraternity could be seen in blackface.

The most awful example to emerge in February was a UNC yearbook page from 1979, which had an image of fraternity members dressed in KKK robes pretending to lynch another member in blackface.

A common feature of these yearbooks was that they came from institutions in the South. Yet, for all the speculation that racist yearbook photos were a feature of colleges in the South, UCLA’s yearbooks show that this phenomenon wasn’t geographically confined. And in the nearly 50 yearbooks from between 1950 and 2000 archived online, racist photos like those of individuals in blackface were relatively rare but still in existence.

UCLA’s yearbook, which was known as Southern Campus between 1920 and 1982, and Bruin Life from 1983 onward, is a mostly student-run outlet. As such, students generally chose the images that went into it. Most of the yearbook was devoted to cataloguing the past year’s events and portrait photos of graduating students. However, Greek life organizations – sororities and fraternities – were given their own pages and the opportunity to share photos of their years, and they chose to share of their most private and personal moments.

For example, a photo from 1951 shows number of people smiling in costumes, with at least one in blackface. A party from a year later has a sorority member wearing a blackface mask. In 1956, Theta Xi members held a coffin draped in a Confederate flag – an interesting choice considering that California has no direct ties to the Confederacy. The fraternity even decided to reshare the image in the 1984 yearbook.

Minstrelsy-style blackface makes an appearance in 1958, with Phi Kappa Tau members dressed as a quartet in this fashion.

The 1959 yearbook is perhaps the most egregious of the bunch, even for the late ’50s. Beta Theta Phi used its space to run an entire Nazi-themed yearbook spread, complete with members raising their hands in Nazi salutes. Phi Delta Theta shared an image of a costume party where a member wore a white robe with a pointed hood, similar to KKK attire. This, for reference, was at a time when the KKK was rising again and launching opposition against the civil rights movement.

Blackface continued into the next decade of yearbooks. During Homecoming 1959, Phi Gamma Delta created a parade float decorated as a “Tijuana Taxi.” Barefoot members wore blackface with hats in a seeming attempt to represent and mock Mexicans. Southern Campus editors lovingly praised their float-building methods and described it as a “pseudo-Mexican style” float.

Another recurrent theme of blackface usage was members depicting scary, uncivilized-looking dark individuals attacking a fair, innocent damsel. Phi Gamma Delta utilized this trope in its 1960 Mardi Gras celebrations, dressing in “pseudo-native attire.” Chi Omega made use of it in the 1961 yearbook.

Historically speaking, blackface was still prevalent in ’50s America, so the photos would not have been uncommon for their time. Nonetheless, it had still originated as a way to mock and marginalize black Americans through overt stereotypes, and these outfits were the closest thing to a black person in these all-white fraternities.

With the advent of the civil rights era in the late ’50s, however, black Americans started speaking out against the use of blackface. For example, the black community of Philadelphia took offense to the usage of blackface in the local Mummers parade. The movement was generally successful in making blackface taboo and forcing it away from the public sphere.

Yet, these photos continued to appear in UCLA yearbooks, with students making a connection between blackface and jungle-dwellers. Such outfits appear in the 1963 yearbook. Two individuals donned blackface at Phi Kappa Sigma’s Jungle Party in 1968.

Beginning in the ’70s, the yearbook format changed and Southern Campus gave fraternities and sororities the option to include only one group photo. As such, the photos of drinking and partying ended for a while, before returning again in the ’80s yearbooks. By then, blackface usage had ostensibly subsided and organization members probably became more prudent in the photos they decided to share. But blackface would make one final appearance in UCLA’s yearbooks in 1985, in which Theta Chi members stereotypically dressed up as black people, complete with fake dreadlocks.

In the post-civil rights era, one would have expected the students in these photos to have known the racist implications of what they were doing. For reference, in 1968, a fraternity held a “Viva Zapata” themed party based on Mexican stereotypes. Following a small student protest, UCLA suspended the fraternity. So there was some understanding at that time that mocking races and nationalities was unacceptable. While these photos are rare in yearbooks, it’s interesting that given the option to have about four photos to represent your entire year, these were sometimes the images students chose to go with.

All this isn’t to say that members of fraternities were the only ones with racial biases. Non-Greek members weren’t given the chance to share their private, personal photos in yearbooks, so it remains unknown whether they ever engaged in these representations.

And racism can’t just be distilled to just images of blackface – it can appear as brash parties or even incidents that go unnoticed for years. The 1968 Viva Zapata party had a banner reading “No Negros, No Japs, No Dogs.” In 1993, a Theta Xi songbook emerged where Theta Chi wrote a song about a “Mexican whore.” And just three years ago it was revealed that Pi Kappa Phi members made racist jokes in their meeting minutes, using a variant of the n-word. And these are just the incidents that went public.

Overall, UCLA yearbooks weren’t as overtly racist as Virginia yearbooks or the UNC one, even though students engaged in blackface usage over the years. But looking at only these public displays by a select few students barely scratches the surface of this campus’ past.