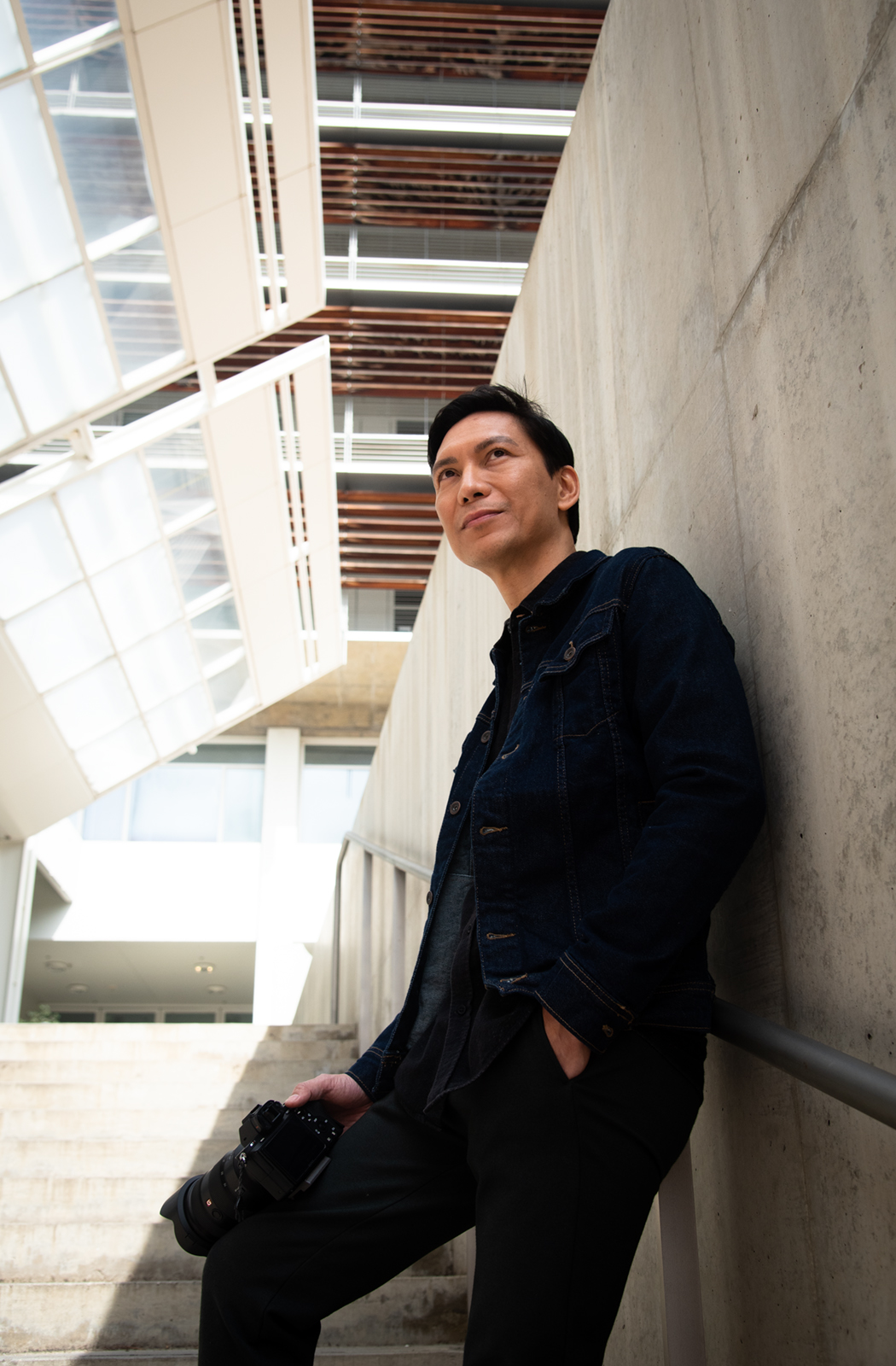 Alumnus and architecture photographer Minh Tran, who goes by Minh T, scouts and photographs fragments of underrated structures in Los Angeles. Through his work, he said he aims to highlight geometry and simplicity in order to transport viewers into otherworldly temporal and spatial settings.
(Joe Akira/Daily Bruin staff)

A passerby may stroll through a parking structure and see mundane cars and concrete, but Minh Tran notices a geometrical symphony of lines, angles and captivating shadows.

Architecture photographer and UCLA alumnus Tran, who goes by Minh T, said he scouts and photographs fragments of underrated structures in Los Angeles, incorporating elements of geometry, simplicity and escapism into his work. By sharing his photographs with his 186,000 Instagram followers, Minh T said he aims to transport viewers into otherworldly temporal and spatial settings. Minh T’s photographs tap into tactical combinations of light and shadow, color and human presence to elicit a spectrum of emotional responses, he said.

“My architecture photography is about capturing a mood or a feeling in a space,” Minh T said. “The feeling is never about the whole building, it’s about a little glimpse of sunlight falling onto the steps or a curtain flowing by an open window.”

Reducing a scenic landscape or a building to its essential, geometric elements brings clarity to his imagery, Minh T said. By specifically focusing on imposing angles, strong diagonals and blocks of light within structures, Minh T said his photographs attain a refreshed perspective of everyday places.

His attention to these aspects manifests in a visually appealing Instagram feed, Minh T said – the curvature of whitewashed arches in one photo is juxtaposed with rigid, rectangular black stairs in the next. Yet, Minh T said there is more than meets the eye because, rather than being purely visual, his photographs aim to allude to fragments of a story that are open to interpretation. One photograph features a man in a black suit and brimmed hat, his back turned to the lens as he walks along a wooden pier – where could he be going and why?

“A still image leaves room for imagination because it’s not spelled out,” Minh T said. “Questions like, ‘Who is this character? What is this place? What time of day is it?’ help build a story that is visual but emotional as well.”

In an attempt to create notions of escapism, Minh T said he prefers to photograph neglected sites in small towns or colleges, like California State University, Northridge, or Santa Monica College, which are rarely recognized for their architectural qualities. Obscure locations facilitate the viewer’s ability to focus less on location and more on being transported to the feeling the place gives them, Minh T said. To further amplify the effects of transportation, Minh T said he wields the Instagram geotagging feature in a specific way. Instead of tagging the exact location that the photograph was taken, he chooses to tag general vicinities like “California,” to prevent associating a specific place with reality.

Tiffany Smith, a professional dancer who collaborated with Minh T in the summer, said she was initially surprised by his choice of location for the shoot – a corner around the bend from the restrooms near Santa Monica College’s track. Smith said the seemingly ordinary space looked sleek and futuristic in Minh T’s photographs. While these qualities stave off nostalgia, Smith said her pose, in which she twists her body and contorts downward, still embodies a sense of inner conflict by expressing a want for more.

“That corner we were in was not anything that I would have found spectacular, but he had a vision through the camera lens that I couldn’t see at all,” Smith said.

Vinny Balbo, another professional dancer, said he also worked with Minh T in a number of low-key spaces like the Sepulveda Dam, parking garages and a community college in Minneapolis. Balbo said the two have collaborated in different spaces to create moods and snippets of interpretive stories. At times Balbo engages in pedestrian activities like walking along a corridor and gazing out a window pensively, while in others he said he adopts dynamic poses to show feelings of excitement or release.

“If you look at the work, the model is never quite the subject in full, but a little piece of the whole picture,” Balbo said. “(Minh T) more so shows the emotions through the body language interacting with the structures.”

Balbo said Minh T’s incorporation of characters and their movements provides perspective, context and emotion in the middle of everyday places to emulate different worlds or a different point in time. In one photo, Balbo leans backwards dramatically against a yellow facade, his arms stretching towards the sky while his shadow casts a triangular shape on the wall behind him. He said his movements elicited a sense of simultaneous sinking and reaching out, lending the picture a longing sentiment; determining what the character longs for is up to the viewer’s discretion.

As of late, Minh T said he is experiencing a creative shift in his artistic photography style as brighter, bolder colors pop into his feed. He said his 2014 Instagram aesthetic featured desaturated and monochromatic shades, which emulated a tranquil and, at times, melancholic mood. Reds, pinks and oranges figure into his current photographs, and Minh T said these posts receive greater responses from the Instagram audience. Although the posts are vibrant and eye-catching, Minh T said they still capture sober notes of reflection – solitary characters wander unidentifiable terrains, as if contemplating something.

Minh T said developing a signature style was a meandering process as he experienced many creative twists and turns through fashion, graphic design and architecture during his college career; the rise of Instagram led him to combine his love for the three. Shapes, shadows and colors of different structures exude a graphic element, while models in brand clothing articulate Minh T’s love for fashion, he said.

“My work changed when I told myself I was going to see things with intention, like the pattern on an oak tree or the filigree on leaves, instead of just looking around,” Minh T said. “The goal is to create an image that is memorable, that changes you and changes somebody else.”