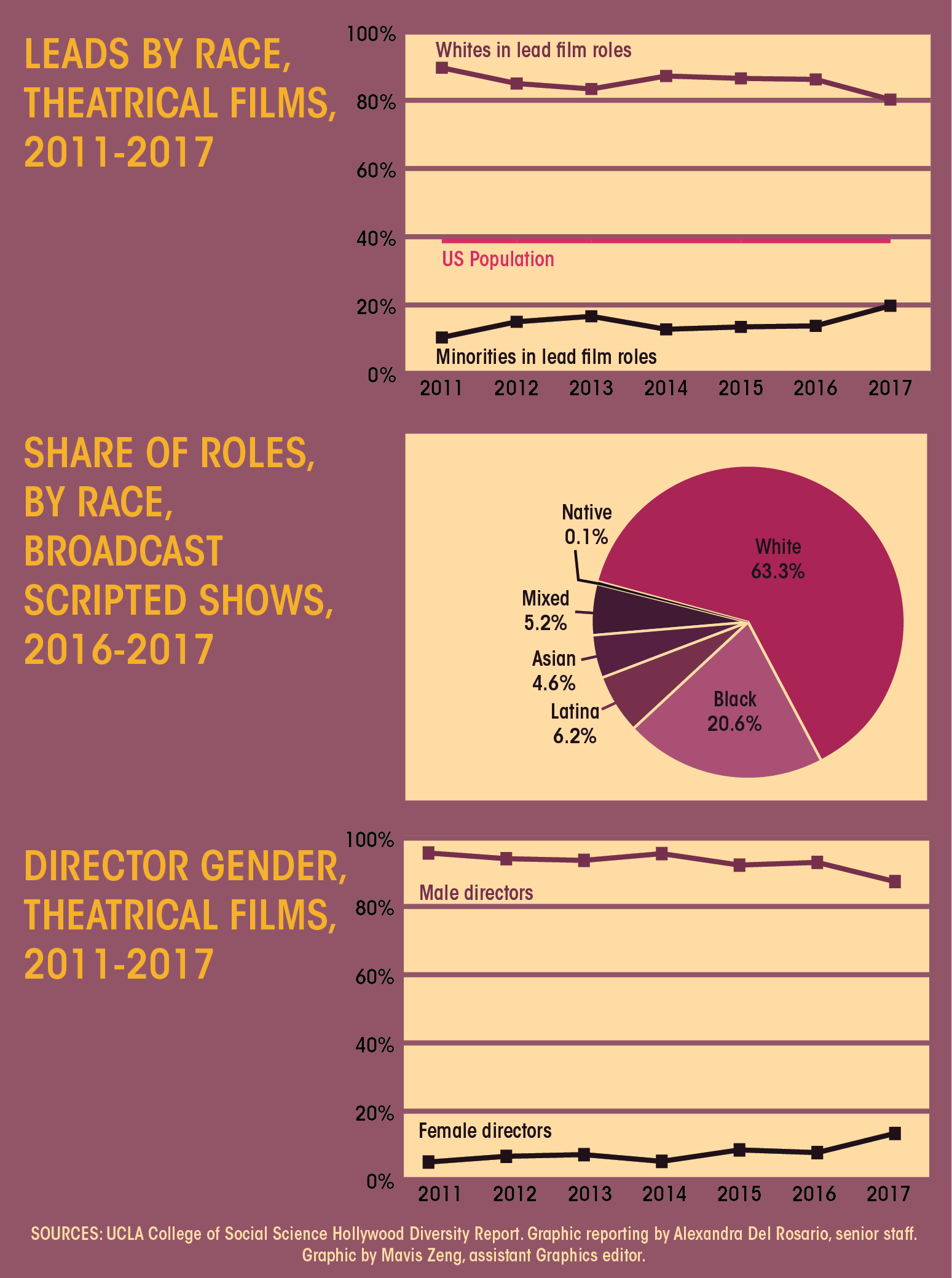 Women and people of color continue to be left out of Hollywood, but the 2019 Hollywood Diversity Report details the proportional representation that is slowly and steadily underway.

Released Feb. 21 by UCLA’s Institute for Research on Labor and Employment, the report is the sixth in an annual series and examines gender and racial diversity in the film and television industries. Zeroing in on 1,316 television shows from the 2016 to 2017 season and 2017’s top 200 theatrical films, the report shows an increase in gender and racial diversity in categories such as directors and digital scripted show leads.

“We think that information has begun to slowly sink in in Hollywood, and that’s one of the reasons we think we’re starting to see more diversity in Hollywood,” said Darnell Hunt, dean of social sciences and an author of the report. “Even though we have a long way to go, at least things seem to be moving in the right direction, particularly in television.”

Hunt said research shows growth in a number of fields, but analysis examining gender diversity in directing and minority leads in film saw significant increases. In 2016, women directed 6.9 percent of the sampled 200 films. The year after, female directors made up 12.6 percent of the 200 sampled films. Hunt said the increase can be attributed to films like “Wonder Woman,” directed by Patty Jenkins, which shows that titles by female directors are, contrary to conventional belief in the entertainment industry, bringing in audiences and box office revenue.

However, women directors still tend to trail behind men by more than 70 percent and need to multiply their gains by about four times to be on an equal standing as male directors, the report shows. Though the percentage jump in female directors may be one of the largest jumps seen in the six years of the report, it doesn’t necessarily indicate too much movement in the industry, said sociology doctoral candidate and report co-author Michael Tran.

“The numbers were so low before, so one or two directors can really change the numbers,” he said.

Minority leads in digital scripted shows also saw a significant increase since the previous report. In the 2015-2016 television season, minorities made up only 12.9 percent of the sampled digital scripted show leads. A year later, they made up 21.3 percent, demonstrating more than an 8 percent increase. Report research contributor Debanjan Roychoudhury said this increase can be attributed to the rising popularity of streaming services like Netflix, Amazon Prime Video and Hulu. Because such platforms produce much more content than cable or broadcast networks, there are more opportunities for women and people of color to share their ideas and more chances for their works to be greenlighted, he said.

“We’ve seen strides made within the past years and a lot of this has to do with the dynamic nature of TV, now especially with the introduction of things like streaming and different platforms,” Roychoudhury said. “(Streaming’s) really giving a wider array of projects and show runners, directors and writers a chance to have their work be produced and shared.”

While there have been areas of growth, the study has also seen some decreases in different fields of study. Both gender and racial diversity in theatrical film writers have gone down slightly from the 2016 report. When it comes to Oscar-winning minority leads, the report saw a large decrease from the all-time high of 40 percent in 2016 to 20 percent in the following year. Spikes like the one from 2016, Roychoudhury said, can often be hard to sustain and can make it hard to truly predict industry trends.

With current titles such as “Crazy Rich Asians,” “Black Panther” and “Ocean’s 8,” the second of which broke box office records, it’s clear that diversity sells and excites audiences, Hunt said. Television is moving much faster than film when it comes to representation, but if trends continue to increase at the rate they are, if not faster, Hollywood can achieve proportionate representation.

“I think we’ll certainly get to something closer to a fuller representation of America in the next decade or so, as long as things continue at the pace they’re continuing,” Hunt said.