Latino homeless population found to be at disadvantage in outreach programs 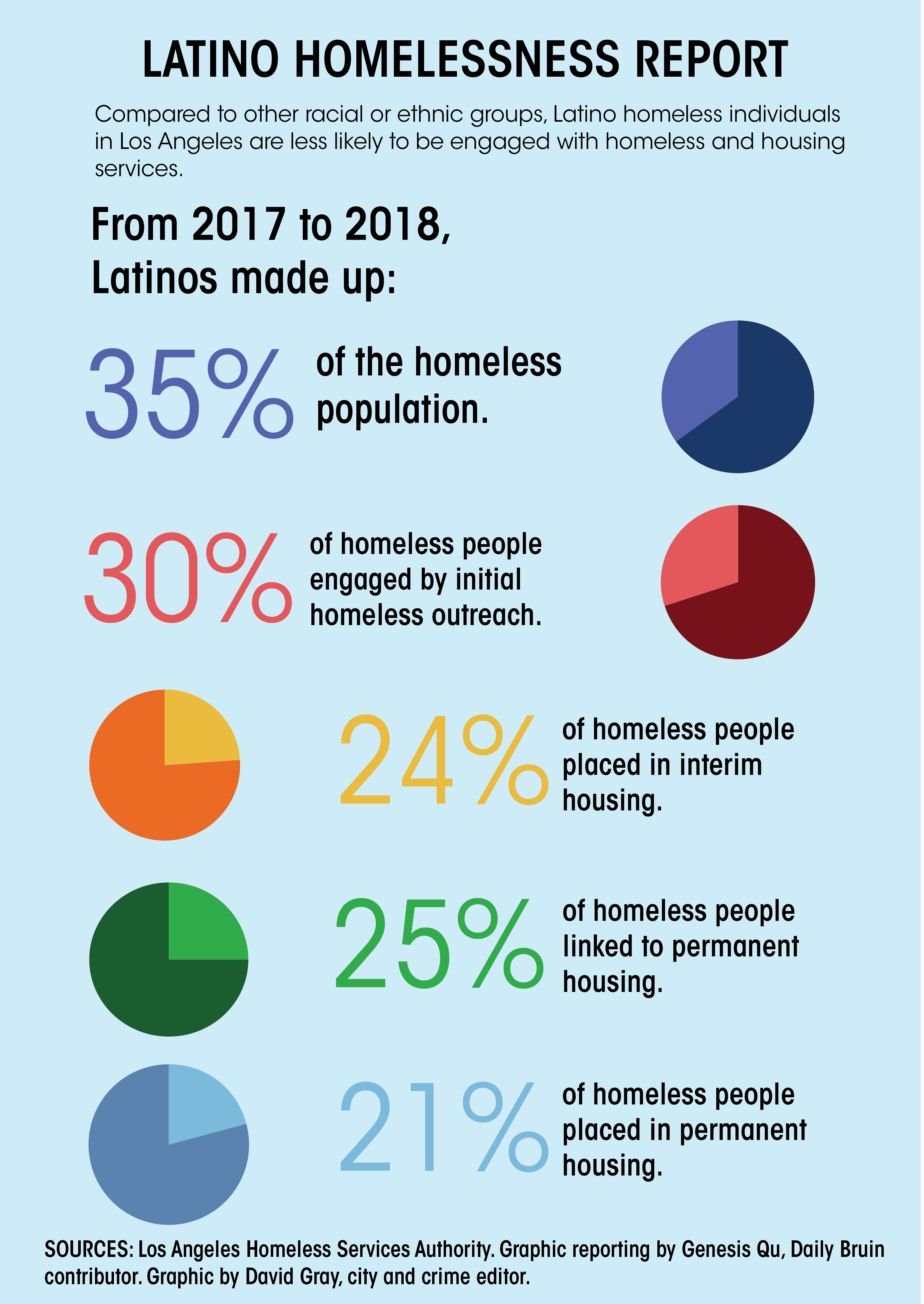 By Genesis Qu and Stephanie Lai

A UCLA researcher found Latino homeless individuals in Los Angeles are less likely to receive support due to cultural and language barriers.

Melissa Chinchilla, a Latino policy and politics initiative researcher, published a study on the Latino homeless population in LA on Feb. 12 using 2017 data provided by the LA Homeless Services Authority and interviews she conducted with researchers and providers of homeless services and resources. Latino people make up 35 percent of LA County’s homeless population, according to LAHSA data.

Chinchilla said she found Latinos are undercounted in the LAHSA homeless count because they are more likely to live in nontraditional homeless spaces, such as converted garages and households with multiple unrelated families, and less likely than other racial groups to use public services. She added that little research has been done on Latino homelessness.

Chinchilla said while the Latino homeless population has continued to grow, it is the least likely out of all ethnic groups to engage with homeless services due to cultural beliefs and challenges with language and immigration status.

The study found a shortage of Spanish translators in homeless services, which prevents homeless individuals who only speak Spanish from understanding the terms of rental contracts and homeless services.

Many Latino families are also unaware of their rights as tenants and are afraid to speak out even if they understand violations are being committed by their landlords, Chinchilla said. Few bilingual lawyers are counseling undocumented immigrants and low-income Latino communities, she added.

The study found Latino people are less likely to utilize welfare services and instead take on multiple jobs when financially troubled.

Chinchilla said Latino people were overrepresented in the criminal justice and the foster care systems, which makes them more likely to experience homelessness and distrust authorities.

Gentrification in many low-income communities in LA has fueled the displacement of Latino populations, according to the study. Only 80 percent of rental housing in LA is covered by rent control. The study states monthly increases in rent prices frequently force low-income individuals out of their neighborhoods.

Donovan Wilkes, an outreach specialist for the homeless population in Westwood, said homeless people are more receptive to services they provide when they are reached out to by staffers of the same demographics.

He added that the services his team offers include hygiene kits, snack packs, blankets and clothing. He said his team refers people to different organizations if it cannot provide them with the resources they need.

Wilkes said homeless people in Westwood are not always receptive of services, though it does not differ between ethnic groups.

He added some people faced restrictions such as long wait times or mental health issues that kept them from receiving support.

Raul Hinojosa-Ojeda, an associate professor of Chicana and Chicano studies, said he thinks the biggest challenge that many Latino homeless individuals face is their citizenship status.

He added Latino people’s access to homeless services is further restricted by what he thinks is an anti-immigrant political climate.

“People are scared to death to get anywhere near a government official,” Hinojosa-Ojeda said. “A first case of undocumented immigrants getting deported in a homeless shelter would mean the end of Latino homeless services.”

Hinojosa-Ojeda said he thinks the structure of the housing and labor market in LA limits access to housing. While there is high demand for immigrant workers, they are often underpaid and unable to afford housing in the city, which sets them up for homelessness, he said.

He added he thinks social media should be used as a platform for raising awareness of encouraging participation in homeless services. A large portion of the Latino homeless population uses cellphones and the social networking platform WhatsApp, he said.

However, Hinojosa-Ojeda said these outreach methods must be used with strategies that take the group’s linguistic and cultural needs into consideration to maximize homeless participation. For example, San Francisco and New York have established ID Programs, which help undocumented Latino individuals obtain a form of identification that helps them sign up for services without having to declare their immigration status.

Another solution to homelessness among Latino people is flexible funding provided by local governments and more collaboration between different service organizations, Chinchilla said.

Hinojosa-Ojeda said by learning more about this population and its specific challenges, authorities could find permanent solutions to homelessness among Latino people.

“(The Latino homeless population) might be the most successful candidate that graduate the transitional housing programs,” Hinojosa-Ojeda said.