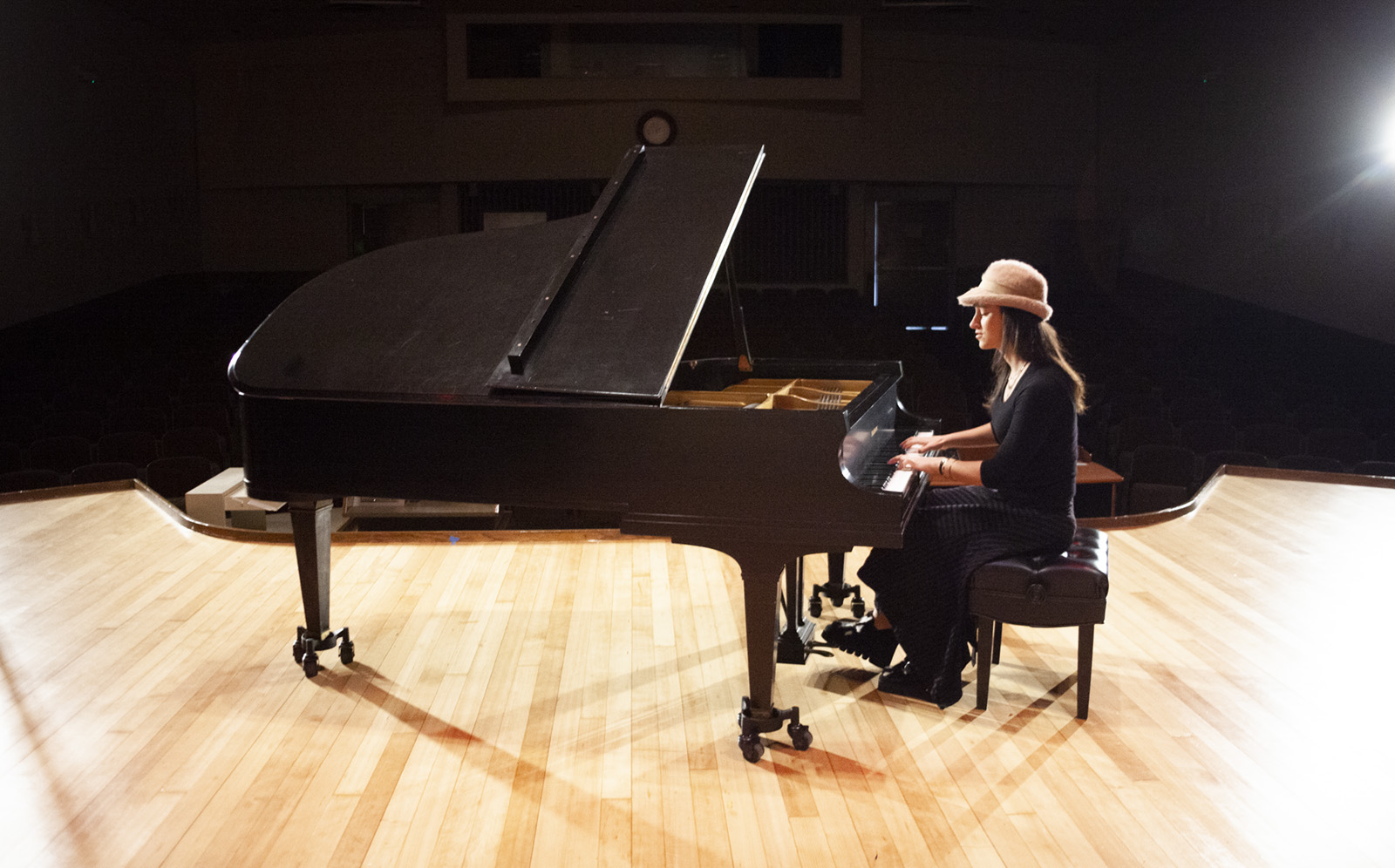 Alumna Dalida Arakelian founded Mindful Music, which puts on daytime concerts every other week in the Semel Institute Auditorium on Westwood Plaza. The concerts are meant to improve the mental and physical health of medical staff and patients. (Mia Kayser/Daily Bruin staff)

Mindful Music takes over the Semel Institute Auditorium every other week, bringing music to an audience, some of whom may wear lab coats and goggles.

“There’s a lot of research out there that shows the therapeutic effects of music on stress (and) depression. It boosts your mood, it changes your mind state,” Arakelian said. “There’s research but there’s no implementation, and by establishing Mindful Music here, (we’re) really translating the research into something people could experience in the moment.”

Arakelian said staging the concerts during the day, rather than at night, and right off Westwood Plaza, helps make the program convenient for staff and patients at the medical center. Some musicians may reach out to her about performing, while others are found through talent scouting. Artists are then auditioned so that Arakelian can better understand their musical intention, since each concert is curated specifically to provide stress relief as well as enhance focus and productivity, she said. Two of the most important qualities she looks for in an artist are their personal connection to their instrument and their excitement to share music with an audience. Musicians who are comfortable enough to express themselves on stage are better able to use music to promote wellness, she said.

“Mindful Music has a deeper purpose than just to entertain; it’s to really understand the personality of the musician, … letting the audience see (the musician’s) most vulnerable self and their most authentic self,” Arakelian said.

Arakelian developed Mindful Music with the guidance and support of Peter C. Whybrow, chairman of the Jane and Terry Semel Institute for Neuroscience and Human Behavior. Whybrow said implementing music into a medical center is important because it allows employees to switch from the stressful operating room state of mind and enter one of calm. Music also creates a rhythmic structure for brain waves, which brings the brain into balance and enables humans to feel thoughtful and unperturbed, he said. Numerous studies have shown that methods of reconnecting hospital patients with the world, such as placing a window in a hospital room, can help them recover faster. Music is similar because it enables the brain to switch from stressful tasks and reconnect with the world, he said.

“There is no doubt (music) has a healing function. … It allows us to move away from the immediate demands of the world and to feel a sense of control and balance in our realization, and that’s of course why people use it,” Whybrow said.

Niloofar Nobakht, a doctor at the Ronald Reagan UCLA Medical Center, believes it is important to bring music into clinical applications and raise public and patient awareness of its psychological and physiological benefits. Music intervention has been proven to decrease anxiety and depression levels, speed up recovery processes, decrease heart rate and lower blood pressure, ultimately leading to a healthy brain, kidney and heart, she said. Nobakht added that programs such as Mindful Music are important in educating others about the role music plays in improving wellness.

“Each of (the artists), no matter what type of instrument or genre of music that they are playing, they take us to another level of resting of the mind,” Nobakht said. “And when you are done, you feel refreshment already physiologically and psychologically.”

Seeing the positive reactions of the audience members is what keeps the concert series going, said alumna and Mindful Music production assistant Kelsey Manes. Based on reviews and feedback, Arakelian said many audience members and employees report feeling refreshed after performances, which is the impact she aims for.

“I use music to heal myself, so I want to be able to bring that to a mass audience,” Arakelian said. “My ultimate goal is this venue – that’s what Mindful Music stands for. … It was born (in Semel Institute Auditorium), it should stay here and it’s just like another cultural gem that UCLA can offer to the community.”