Interactive exhibit showcases beauty standards from around the world 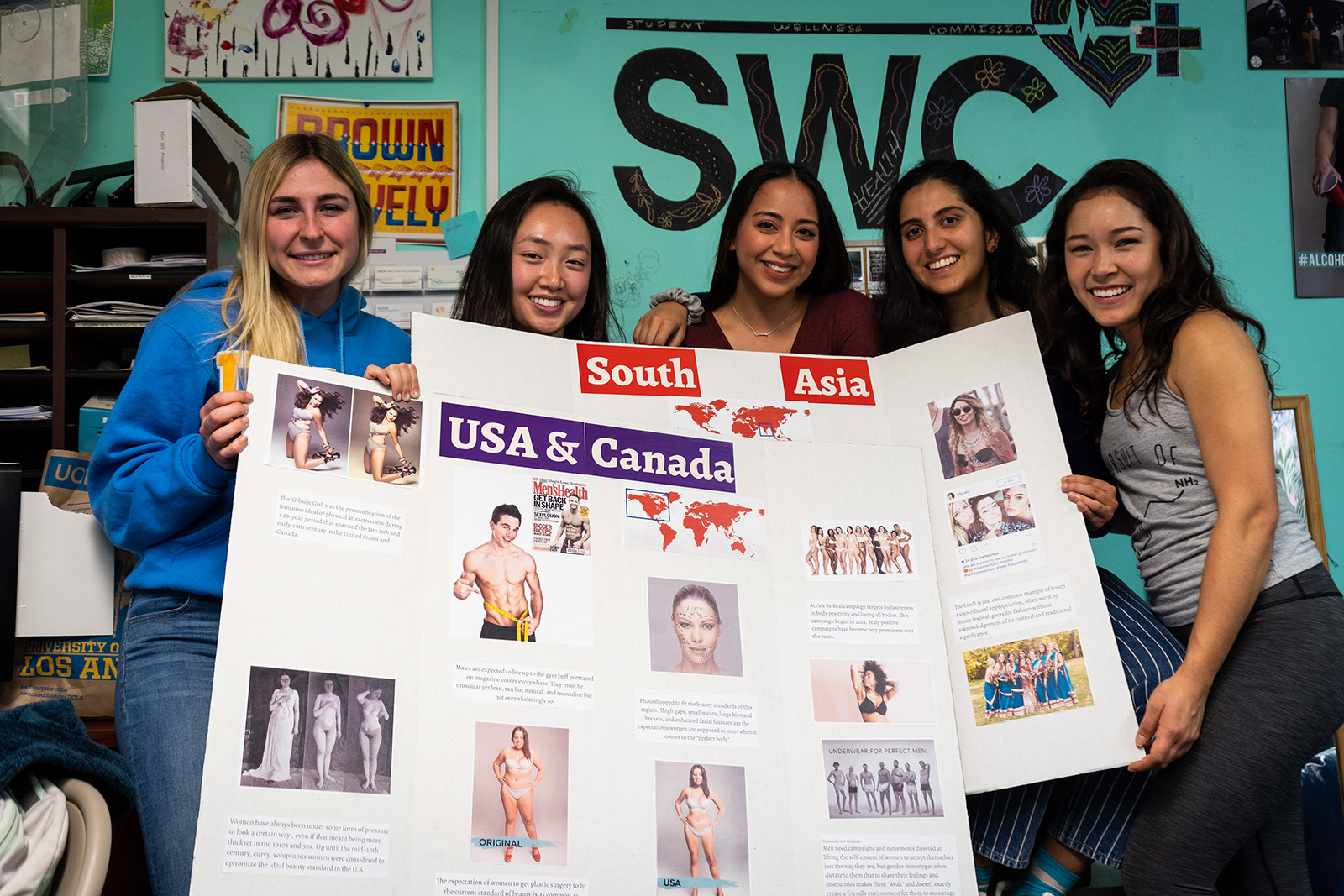 Unfollowing Beauty Standards is the final event of I Love My Body Week, organized by Undergraduate Students Association Council Student Wellness Commission Body Image Task Force. The exhibition will be on display in Kerckhoff Art Gallery and will focus on beauty standards that differ from Eurocentric viewpoints. The exhibit will be divided into continental regions, including North Africa and South Asia. (Xuxin Zhang/Daily Bruin)

A room in Kerckhoff Hall will transport visitors around the world with the help of a special passport – one that earns stamps for body positivity, rather than the number of countries visited.

Hosted by the Undergraduate Students Association Council Student Wellness Commission Body Image Task Force, Unfollowing Beauty Standards is the final event of I Love My Body Week. The event, unfolding at Kerckhoff Art Gallery on Friday, will highlight beauty standards that exist outside the Eurocentric viewpoint many UCLA students are exposed to. Such standards have pervaded cultures around the world, said Mihika Sridhar, a third-year microbiology, immunology, and molecular genetics student and research director for BITF. Divided into continental regions, such as South Asia and North Africa, the exhibit will emphasize various indigenous populations that have remained untouched by post-colonial influence, later moving into the historical repercussions of how beauty standards in general have evolved, Sridhar said.

“Many cultural standards of beauty are the complete opposite of what you and I deem beautiful, and it’s eye-opening to see how it was in the past is still that way now,” Sridhar said.

The exhibit itself is framed as a travel narrative where students will interact with BITF members as they walk down the line of tables. With approximately nine informational poster boards set up, visitors can read, listen and speak to various task force members about their responses to the information. If they interact with the information presented, by talking to task members, for instance, the students will receive stickers to put on body positivity passports handed to them at the entrance. Those who obtain all nine stickers will receive a baseball hat, Sridhar said.

One poster board details beauty standards from various Pacific Islands, such as Hawaii, Samoa, New Zealand and Guam, many of which are still adhered to today, Sridhar said. For example, some island cultures laud those who may be considered overweight. For men, the extra weight translates to strength and power, while women with larger figures are viewed as fertile and healthy, Sridhar said. Body adornments, such as symbolic tattoos, are also thought to be more emphasized when displayed on a larger figure. These standards differ greatly from the European model of a slender figure, blond hair and blue eyes, said Malia Gutierrez, a fourth-year sociology student and co-director of BITF. Many poster boards will be accompanied by photographs of islanders, while others will use magazine covers to show side-by-side comparisons of celebrities, which reflect the Hollywood beauty standards most college students are exposed to.

“With college students, we’re at an age where we’re most susceptible to media and societal standards. We’re influenced by what we see and believe that’s what we should live up to and that’s completely false,” Gutierrez said. “I might think that people I see on Instagram is the norm, but it’s just a beautiful lie.”

The event also harkens back to traditions buried deeper in time. Diving into ancient Egyptian culture, the exhibit includes a poster board to show the emphasis on bodily grooming, particularly in terms of hair removal from the entire body. Ancient Egyptians also relied on natural sources for makeup, like kohl for lining the eyes, and invented several precursors for the modern beauty routine – one of the first forms of lipstick was crushing bugs to achieve the coveted crimson hue, Sridhar said.

Transitioning into the effects of Western hegemony, the event also delves into the effects that colonial influence has had on Eastern beauty standards. Precolonial India based its sense of beauty largely on class dynamics: Women with curvy, motherly figures donning brighter colors were the epitome of classical beauty. After the British dominated India, skin lightening swept through the country, Sridhar said.

Similarly, in Southeast and East Asia, darker skin was associated with toiling in the fields and tied to the peasantry class, said Alyssa Tabula, a fourth-year psychobiology student and co-director of BITF. Even though the monolid is a common Asian feature, she said, many East Asians have makeup practices that try to distract from them and make their eyelids look fuller and more European. Another poster board, complete with photos of women and makeup examples, will elaborate on this trend.

“It’s important to realize beauty standards aren’t real and just because you may not fit them doesn’t make you not beautiful,” Tabula said. “There are different ways to approach the term ‘beauty,’ and you don’t have to look like one specific person to be considered beautiful.”

Sridhar said that, by showcasing the variety of beauty standards held around the world, the event aims to emphasize the strength of individuality and self-confidence. She said she also hopes the event will make students more historically conscious of why Western influence is present in so many beauty ideals.

“We are a diverse school with a lot of international students, but it’s often difficult to engage with those different spheres of student life and then beyond in the world,” Sridhar said. “Any sort of educational event where people get a chance to appreciate rather than appropriate culture is important for being more empathetic and more knowledgeable humans.”