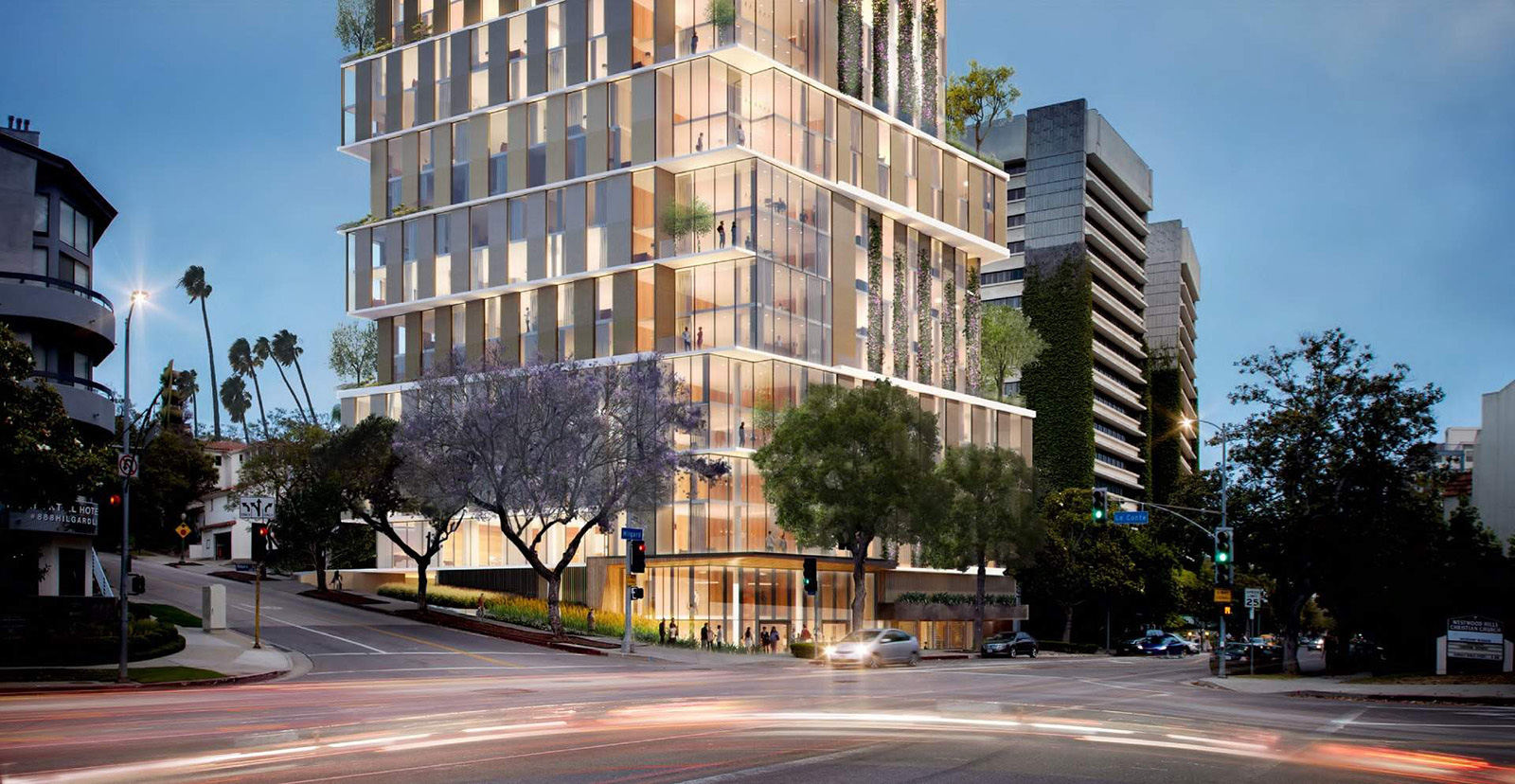 The Agora is a proposed 16-story housing project on Hilgard Avenue. It has faced opposition from multiple community organizations for traffic and lack of affordable housing. (Courtesy of Aaron Green)

Westwood community members oppose a proposed housing project because they think it will replace existing affordable housing and cause traffic congestion.

Two physicians filed a plan with Los Angeles to build a 16-story housing development, called The Agora, on Hilgard Avenue in November. Several community organizations, including the Westwood Neighborhood Council and the Holmby Westwood Property Owners Association, oppose the project.

The developers stated in their original proposal there were zero residential units and that the building was vacant. In fact, two businesses currently occupy the Hilgard property, including 27 residential units.

Green said the vacancy classification was due to a clerical mistake and the developers will revise the application.

Green added the project is estimated to take two years to gain approval from the city. If the city council approves the project, NuORDER and PodShare’s five-year lease will end a year and a half early due to a clause in their lease which states the developers have the right to develop the building after three years, Green said.

Construction will begin after approval from the city and continue for three years.

PodShare offers 90 beds at $840 a month for one bed, Miniard said. Residents can also stay for one night or a week at varying costs.

The proposed Agora project would house 462 beds at $1,000 to $1,200 a month per bed, said Ted Khalili, co-principal developer of The Agora. At least 52 beds will be Measure JJJ-compliant, which means they will be priced less than the proposed standard rent range. However, Agora representatives did not specify how much this would equate to.

The initial application said the housing project would only house 231 beds. Green said the developers decided to double the beds after listening to community feedback. Each room will now have two beds, rather than the single-person bedrooms as originally planned. However, rental rates remain unchanged despite the decreased room space.

Greg Billo, a PodShare resident, said he thinks the proposed project is misguided because The Agora would replace what already exists on the property. Billo said more than half of PodShare’s beds are empty each night, and he thinks filling the proposed high rise would be difficult.

Earl Goldstein, a board member of Holmby Hills Homeowners Association, said stakeholders shared similar concerns with Billo at their January meeting, adding that the association opposed the project at their monthly meeting due to concerns of traffic congestion along Le Conte Avenue and the feasibility of the project.

Several homeowners created Save Hilgard Avenue after estimating the project would cost $100 million, which they believe is too costly for the property’s proposed rent prices. However, Green said the cost of the project is about 50 percent less than the homeowners’ estimates.

Marcello Robinson, a member of the WWNC, said Agora developers asked the city attorney’s office to prevent the neighborhood council from speaking on the matter even though it was placed on the agenda for their January meeting. The council voted in opposition of the project at the meeting.

Green said over the next two years, the developers will conduct a large-scale environmental impact report and will work with nearby residents to amend the project to address their concerns.

Several homeowners also expressed concerns regarding the unauthorized usage of the photos in the project’s ad campaign and the campaign’s suggestion that the Agora project would help combat homelessness in Westwood.

To promote the housing development, The Agora project used a social media campaign featuring a UC Berkeley student holding a sign saying “Hug me I’ve been a homeless student,” as well as statistics on UC student homelessness and a petition to LA City Councilmember Paul Koretz to approve the project.

Taylor Harvey, the subject of the photo and a fourth-year art practice and social welfare student at UC Berkeley, said she was offended when she saw her photo on the ad from the Agora developers.

“I never gave them permission to use my photo,” Harvey said. “It’s exploitative and an invasion of privacy.”

The photo was initially used for other campaigns by UC Berkeley’s Homeless Student Union, a school organization she founded four years ago to combat homelessness, Harvey added.

Green said they found the picture from a German student publication. The developers removed the social media advertisements Monday, after the Daily Bruin inquired about the photo. The German publication was not immediately available to comment on where they found the photo.

Several students said they think the Agora project could provide much needed housing in Westwood, but they do not think it will be very affordable.

“I think that a development like this would help because I feel like the reason Westwood is so expensive is because there isn’t a lot of space or housing available,” Kiruveedula said. “If there’s more apartments they would start to become more affordable.”

Daniel Lee, a first-year cognitive science student, said off-campus housing is limited and difficult to secure because of the large number of students looking for apartments, which he thinks The Agora could alleviate.

“It’s not too much of a question of affordability but rather availability as everyone scrambles to find a spot,” Lee said. “Honestly the building seems more like any other luxury apartment that’s just trying to brand themselves differently.”

The North Westwood Neighborhood Council voted to show preliminary support for the housing project at its December meeting. However, Michael Skiles, president of the NWWNC, said the council would not fully approve the project until it is certain the project is only intended to provide affordable student housing.

Skiles is also the president of the Graduate Student Association, which voted to support the Agora project at its January meeting. However, he was not involved in the forum that determined the GSA’s stance.

“Ultimately I think GSA supported the project because they saw in the project a serious hope for mitigating the student affordable housing shortage in Westwood,” Skiles said.

Green said the majority of homeowners the developer’s lobbying team have spoken to expressed support for the project.

The developers aim to continue working with the community to incorporate their feedback into the project in hopes of gaining city approval, Green said.