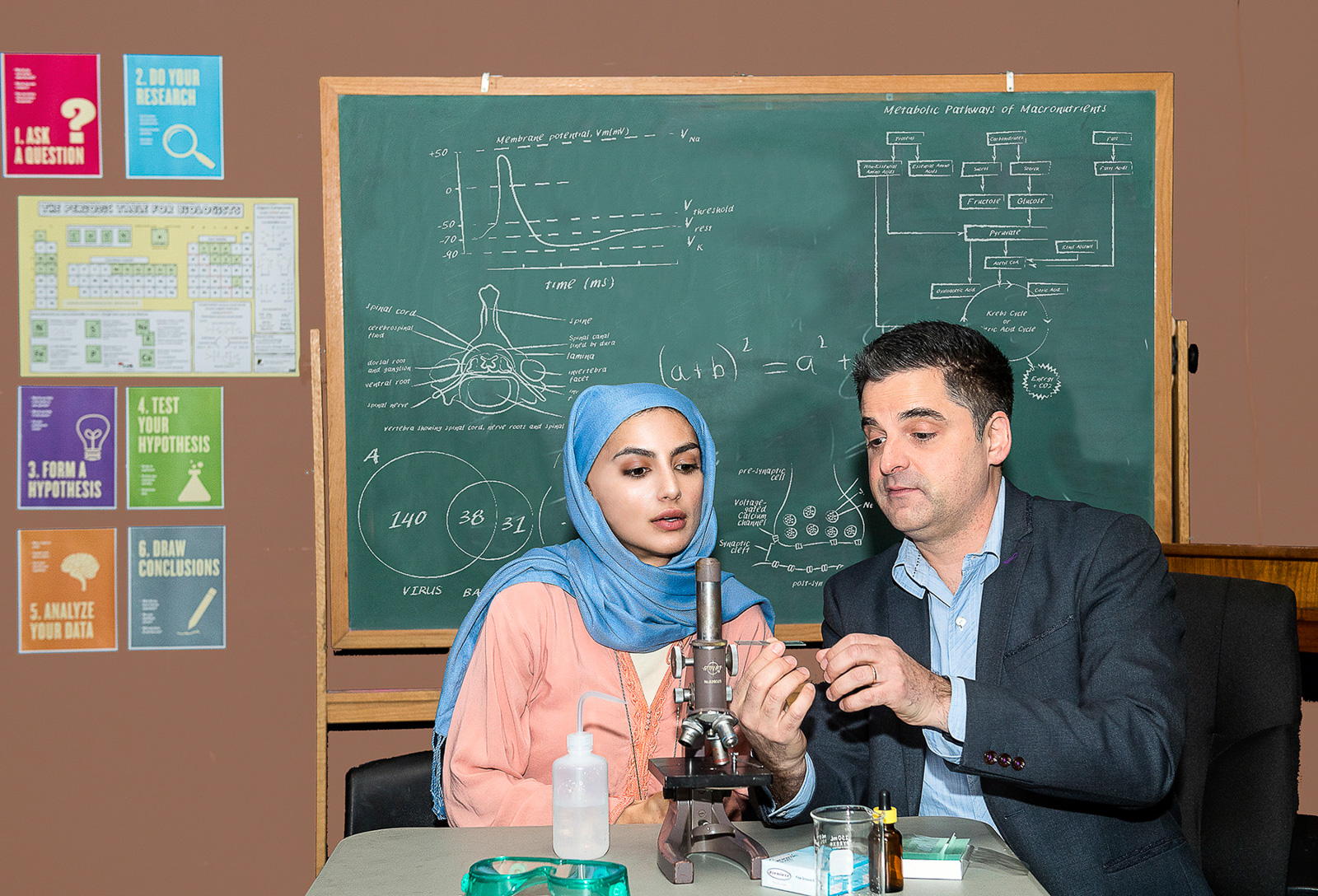 Alumna Medalion Rahimi and actor Jeff Marlow star in “Paradise,” a play following their two characters – an optimistic student and her bitter science teacher – as they band together to get Rahimi’s character a scholarship. Rahimi said her character diverges from the stereotypical portrayal of many Muslim characters in media.
(Courtesy of Earl Gibson III)

The play makes its West Coast debut at the Odyssey Theatre on Saturday and will run through Feb. 17. “Paradise” is centered around Yasmeen Al-Hamadi, a high school senior played by UCLA alumna Medalion Rahimi, and Dr. Guy Royston, her teacher, played by Marlow. Directed by Vicangelo Bulluck, the play follows the two seemingly disparate characters as they unite to conduct a neurological study in hopes of earning Yasmeen a scholarship. While the play may stir up political topics, it doesn’t provide simple solutions to the issues it presents, Marlow said.

“I fell in love with it, because it dealt with a young woman in STEM and I know how important that initiative is. And then it was a fully realized three-dimensional young Muslim woman,” Bulluck said. “I felt that was really important and timely, especially in our current political environment, that it’s a human being that we end up caring for and understanding.”

As a Muslim Iranian-American herself, Rahimi said her portrayal of a positive Muslim character is of note, as they are often relegated to small roles as extras or harmfully stereotypical roles as terrorists. Contrarily, Yasmeen is a hopeful, optimistic girl who may not know everything about the world but wishes to learn through science, logic and her culture, Rahimi said.

“I think it’s nice to show that there’s humanity in everybody regardless of their background,” Rahimi said. “It’s just a play about an intelligent young woman discovering herself and her identity and sort of ascending her male mentor, which I love.”

The illumination of diverse cultural identities also lends itself to highlighting the role of women in science, Marlow said. Featuring this young woman in STEM accents an important cause, Bulluck said. Yasmeen serves as a source of hope and inspiration for the tired science teacher, Marlow said, and the uplifting character may prove inspiring to the audience as well.

“The issues of race, culture and class are things that we deal with every day in our lives,” Bulluck said. “We may not address them, but we can look and see what happens as politicians use them to either unite or divide us.”

“Paradise” is inspired by the work of Helen Fisher, a biological anthropologist and the author of “WHY WE LOVE: The Nature and Chemistry of Romantic Love.” Similarly, the play explores the idea of love as a biological process, an idea that fuels the neurological research done by the pair. As Yasmeen and Dr. Royston conduct their scientific experiment, they discover the different ways love is expressed in their own lives from the sheer love of learning to love of one’s culture, Bulluck said.

Despite the large overarching concepts of race and religion, “Paradise” remains lighthearted and cheerful, Rahimi said. For example, she said Yasmeen and Dr. Royston often riff off each other’s excitement over neurobiology, adding humor and laughter to the otherwise dramatic play. The innocence and curiosity of young Yasmeen makes for wholesome discoveries as the two main characters impart their distinct wisdoms to help teach one another and grow, Rahimi said.

“I think that’s what everybody does from day to day: We try to make sense of the world with the resources that we’re given,” Rahimi said. “So I just want people to leave the play with that feeling of hopefulness, that lightheartedness and maybe just look at their neighbors a different way.”