The Quad: Difficulty behind maintaining New Year’s resolutions, why they can fail 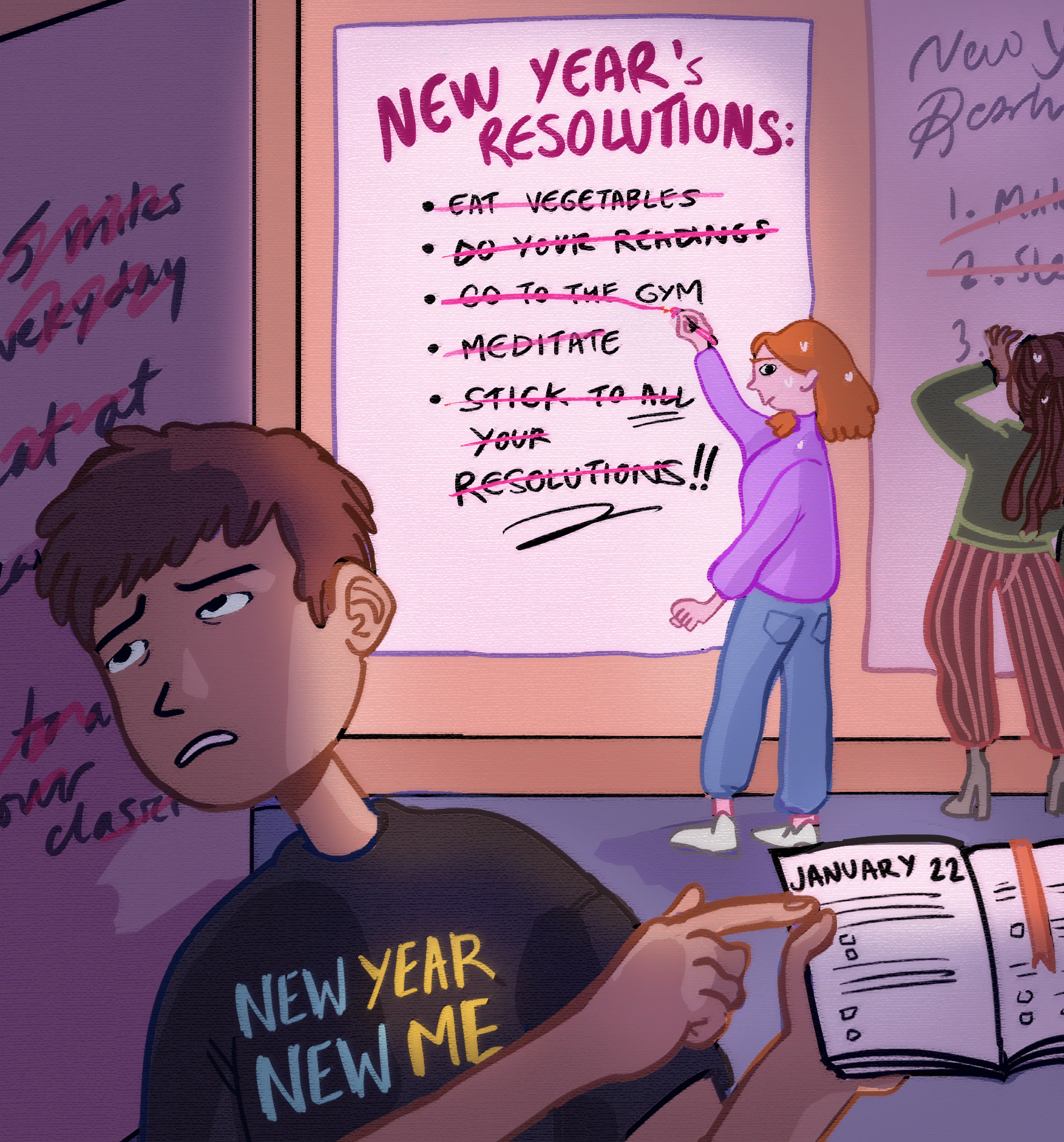 What do weight loss, healthy diets and fiscal responsibility all have in common? According to Inc., these are some of the most common resolutions people make at the start of every new year.

We cyclically embark on these journeys of self-improvement as we forgo our bad habits and attempt to live out healthier, more desirable lifestyles – but our journeys are often not linear.

Hengchen Dai, an assistant professor of management and organizations and behavioral decision making at the UCLA Anderson School of Management, said she attributes this pattern of self-initiated change to how we correlate the calendrical transition with personal proactivity.

“The transition point creates a separation between who we were in the past and who we will be in the future,” Dai said. “There is a mindset that things can change, that we can change.”

Despite this surge of confidence and proactivity come the new year, repeated surveys have shown that the commitment to our resolutions dwindles as time wears on. In fact, it’s common for resolutions to begin to hit a roadblock in the early months. Approximately 80 percent of people will drop their New Year’s resolutions by mid-February.

Popular resolutions that are taken up are often based on personal health. In a survey by YouGov, approximately 38 percent of participants cited eating healthier and exercising more as their aspirations for 2018. But this makes it even more discouraging to find out that most Americans are likely to drop their personal health and fitness resolutions 17 days into the new year, according to a social media survey conducted by Strava.

For many students, these statistics parallel their own susceptibility to new year’s resolutions left unfulfilled.

“My diet is getting better. But ‘gymtimidation’ is so real,” Ahmadi said. “Motivating myself, taking that first step and going to the gym that first time – there’s always a bit of anxiety.”

“Gymtimidation,” or the fear of going to the gym due to perceived pressures to match up to workout professionals, is a feeling that gym novices know all too well. Indeed, a survey conducted by gym equipment review platform Fitrated revealed 65 percent of women avoid the gym due to fear of being judged.

First-year molecular cell and developmental biology student Charlotte Ann Magaipo Suiza faced similar difficulties. For the new year, Suiza made the resolution to transition from omnivorism to vegetarianism – a dietary lifestyle that she found hard to commit to, growing up in a traditional Asian-American household in which most dishes featured some kind of animal product.

“UCLA has a lot of plant-based options, which make it easier,” Suiza said. “But it’s been a challenge, mentally. I find myself having lots of cheat days.”

There is an underlying reason to why personal health and fitness resolutions are often left unfulfilled, Dai said. These goals are often set without the potential obstacles – whether it be gymtimidation or meat cravings – in mind.

The course of Ahmadi and Suiza’s resolutions reflect a much larger issue with the new year tradition: self-efficacy. As defined in a study conducted by Columbia University, self-efficacy is an individual’s belief in their ability to achieve goals, and therefore how persistent we are in pursuing said goals.

So it makes sense that the higher the perceived self-efficacy, the more determined and driven people are in approaching challenges – New Year’s resolutions included. This opens the door to unchecked optimism; it’s common for optimism to guide us in the formation of our New Year’s resolutions, but it is in this same optimism that our resolutions can become overzealous, and, quite possibly, unattainable.

“When people are over-optimistic, there’s a tendency to not be well-prepared and set out a proper course of action,” Dai said. “And if they don’t see progress early on, they may give up.”

Ahmadi’s solution? Tackling her gymtimidation in an incremental manner.

“I’m thinking of signing up for fitness classes at the gym,” Ahmadi said. “It would be a more encouraging place for me to start off.”

As for Suiza, becoming a flexitarian, rather than vegetarian, is more approachable of a dietary change. Being plant-based but having the occasional opportunity to eat meat and other animal products is exactly the kind of leniency that she needs, Suiza said.

The prospect of the new year brings forth a wave of hope, but is often replaced with sentiments of defeat as New Year’s resolutions run their course. To counteract this, it’s important to remember that these resolutions are not restrictions, but rather destinations that require preparation.

“During the new year we have a renewed optimistic approach toward goals,” Dai said. “But we need to have a well-thought-out plan that takes into account any difficulties that may arise.”